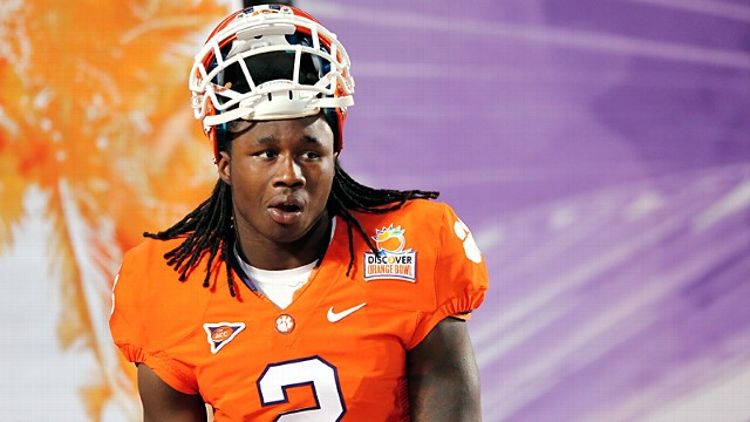 A thoughtless vandal made headlines this summer by chipping away at Howard’s Rock. That was an obvious strike at the heart of a symbol. But where is the uproar when an athlete’s prideful ways threaten to split the rock-solid heart of a squad?

Am I hearing correctly that Sammy Watkins thinks his football team might beat another football team? There’s something buggy in the Palmetto State. Just when you thought all the Cockiness was contained in Columbia, a familiar barnyard bantam has begun crowing in Clemson. Sammy Davis Jr.? Well, this Sammy’s a diva, AND a junior, it’s plain to see.

“If we come out and beat Georgia, not just beat ’em but beat the mess out of ’em like we should, I don’t see no problems in getting started in the right direction. I don’t have disrespect for them or for nobody else, I just believe we can be just the kind of team we want to be. The talent is here, we know how to win.”

FACT: You can’t spell “Sammy Watkins” without “MY WINS.”

College athletics has its share of problems. Drugs. Graduation rates. Tattoos. But elite athletes with attitudes like Watkins’s, guys with the temerity to think highly of their own team’s fortunes, are doing more than all these factors combined to erode the Cordura stretch fabric of the game.

It’s high time somebody put this Clemson Clownfraud in his place.

Talking is for coaches, young man. That’s why they give them headsets. You, on the other hand, have the right to remain silent. Any trash you talk can be used against you — not in a courtroom, but on the field. In the Court of Raw.

FACT: You can’t spell “Sammy Watkins of the Clemson Tigers” without “SELFISH.”

Squad’s Worth. Sammy Watkins. Coincidence? Do you even need to ask?

It’s one thing if the Tigers are successful in their campaign against the Bulldogs. Sure, fine. Whatever. But how is Watkins — and his teammates — going to feel if he’s on record saying they will be good at football and they turn out to maybe not be quite as good? If you can’t stand the heat, kiddo, get out of Death Valley before you get burned because you can’t make it rain.

If Watkins wants to talk, then he obviously doesn’t understand what being a Tiger means. Tigers hunt in silence. The only talking tiger I know sells Frosted Flakes. There’s nothing sweet about the cold dish Sammy Watkins and his antics just ordered. This would-be emperor is nearly naked, wearing nothing but rags.

FACT: Sammy Watkins is from Fort Myers, which has a “Me” AND a “My” in it.

No, confidence in the outcome of a game is only 100 percent valid after the game is through, and if you’re not interested in 100 percent accuracy, what in purple hell are you doing being a wide receiver? Confidence is acceptable after victory is assured — or does Sammy Watkins know something we don’t?

Is it really so farfetched to wonder if he’s been doing some consorting with Nike — the actual Nike, Greek goddess of victory? If Sammy Watkins has turned to pagan arts to guarantee wins for his team? Who is he really pointing at when he gestures to the sky after his scores?

Can we ever really know?

“I’m focused on what Clemson can do this year,” said Sammy, “but not just this year, I mean these next four, five, six years.” Clearly, Sammy Watkins thinks he’s above at least the laws of NCAA eligibility.

What other rules does he think don’t apply to him?

The laws of time and space, perhaps?

FACT: There are TWO me’s in “SamME Watkins, TiME Lord.”

He does sound awfully confident. Like a guy who can see through time. Watkins is majoring in communication studies, but all he’s communicating right now is a flagrant disregard for the side-scrolling plane on which humans live their lives.

“If we beat Georgia like we should,” says Sammy Watkins. What exactly does he mean, “should”? Been doing some soothsaying with your immortal mythical pals, Sammy Witchkins? Or does he think he knows more about Clemson’s prospects against the Bulldogs than his own head coach? It’s not for us to say whether Watkins thinks he could do a better job of coaching the Tigers than Dabo Swinney, or whether he’s been consulting mysterious and unsavory oracles in violation of the Scriptures to see the football future.

That’s for the police, and perhaps a trained exorcist, to decide.

But either way, there’s a bad moon rising to light Death Valley. And this moon will make even cats howl.

And either way, we don’t need SamME Watkins, with his unseemly happiness concerning his team’s preparation. We need SamWE Watkins, a leader who understands football is a game of 22 moving parts, any one of which can snap at any second. A guy who can face the nation in a postgame interview and say, “You know what, I’m pretty sure, based on the scoreboard and all available data, that we just won a football game.”

Even a communication major should be able to do the math: What’s the difference when you take out “we” for team, and add “me,” Sammy Watkins? A “W.”

The All-22 All-Star Team: The Vikings' John Sullivan