Here There Be Dragons: The Return of UAB Football 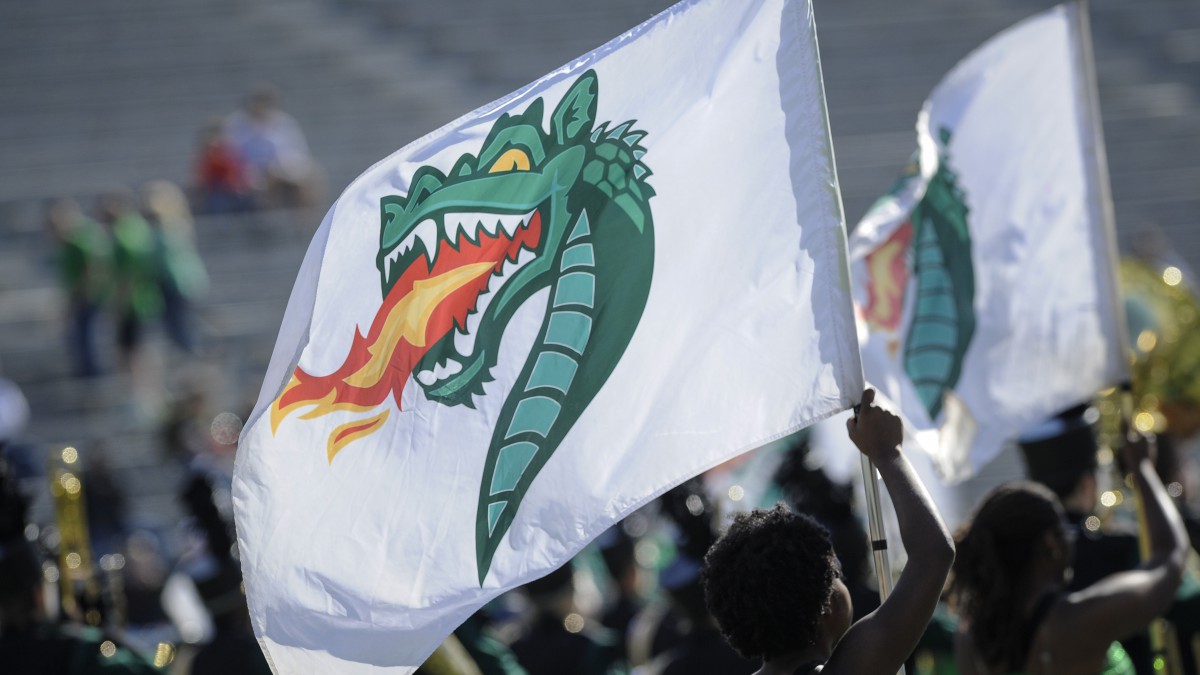 There’s a digital clock on the wall on the left going down the steps into the UAB football offices, done up like a miniature scoreboard, green and white with the team’s dragon-head insignia. It reads BLAZER FOOTBALL COUNTDOWN and has spaces for ticking off the remaining days, hours, minutes, and seconds until the next University of Alabama at Birmingham football game, and right now, it’s dark.

The Blazers don’t live here, not the way they once did. Not since December, when the university clumsily disbanded the team. UAB reinstated football in the summer, after most of the athletes and all but a few of the staff had situated themselves in new schools, and while the program shudders back to life, the hallways remain mostly empty. Administrative assistant and team den mother Shannon Ritch says she still isn’t used to the absence of sound that follows a slamming door in the building. Each bang used to herald a parade of players, hooting and hollering and tumbling all over one another like packs of puppies walking upright. Now, the absence is palpable.

Into the midst of this quiet afternoon bounds head coach Bill Clark on a literal ray of sunshine, calling goodbyes back over his shoulder to whomever he’s been talking to in the parking lot for the past half-hour. Removed from the doldrums of a lost offseason, Clark’s faintly maniacal grin is once again permanently affixed to his face. “You would never know,” says one of his players,1 “that we don’t have a game this weekend.” It is go-go-go-go-go time, for him and for what’s left of the Blazers, and they will worry about whether they have enough destinations to fill out the itinerary later.

UAB football is not yet back to being UAB football, but Bill Clark is back to being Bill Clark, perpetually ebullient in the face of ridiculous odds. You kind of have to be to do something like join Joey Jones’s nascent South Alabama staff in Mobile and help spin a program out of nothingness.2 To leave your alma mater, Jacksonville State, to take over the left-for-dead Blazers. After UAB lost to Marshall 23-18 in the next-to-last week of the 2014 season, dropping the team to 5-6 and almost out of reach of bowl eligibility, Clark stopped me on the way out of his postgame interview sessions. “When you write your story,” he said, “make sure you mention we were about to come back.”

On November 29, in the final game of Clark’s first year as head coach, UAB defeated Southern Miss 45-24 to become eligible for a bowl invitation, and was the first squad since the 2004 season not to post a losing record. But on December 2, the university announced it was cutting the football program, citing the unsustainable costs of competing in major-college athletics. The players and coaches scattered to new opportunities, to graduation, to the NFL. Clark, still under contract, stuck around. For one thing, he had his retirement plan to think of. He also wasn’t entirely convinced his program was dead. He occupied himself with family time, speaking engagements, trips to clinics and to observe coaching staffs whose work he admired, and trying to remain convinced he was doing anything other than treading water. Fending off a sense of professional whiplash didn’t come easily.

“I tried to keep myself busy,” says Clark, “but when you’re used to working a hundred hours a week, what all can you do? There were days in there, waking up at 4:30 in the morning and going What just happened? But I think we all have those. It wasn’t like I was ruined. And things kept happening to tell me, ‘We are supposed to be here.’”

The public outcry and bitter invective that accompanied the program’s axing, aimed chiefly at university president Ray Watts and the University of Alabama System’s Board of Trustees,3 didn’t go unnoticed. In April, an independently commissioned study found that the football program hadn’t been a money loser. Local business interests got involved. The city of Birmingham pledged monetary support. On June 1, UAB announced the football program, along with the folded bowling and rifle teams, would be reinstated, and Clark went back to, if not his once-habitual 100-hour weeks, something close enough to warp speed for his liking. He’d lost half a year of recruiting and relationship-building, and there wasn’t a moment to squander. “I’ve got to sell shovels in the ground,” he says. “We’ve got a great school, a great community, and we know football is important here. That’s what I was selling last year. But now it’s a different day. We’ve gotta build a whole program.” He fantasizes about forging new research partnerships between the athletic department and UAB’s well-regarded medical school. “I’m an old training guy. I want this to be the place you come to train. I want to see UAB sports science on the cutting edge, whether it’s concussions or optometry or nutrition.”

And in the meantime, he’s got to build himself a football team. Like, almost an entire football team. In July, he signed his first player, Tyler Jones, a transfer from Memphis. In August, the remnants of last year’s Blazers reassembled on campus for workouts. Clark estimates he had 120 guys on the roster last December, and 33 now, about 20 of whom are walk-ons. It’s a near total rebuild, a concept not unfamiliar to a veteran of South Alabama. The UAB staff has its team working out on a schedule that closely resembles what would be spring ball in any other year. Clark could run regular practices, but he doesn’t want to. For one thing, he doesn’t have a quarterback. For another, with the Blazers not scheduled to resume play until 2017, what’s the point? The team is focused, for now, on purifying the raw materials it has on hand, and as someone who’s fond of calling himself “just an old strength-and-speed guy,” Clark is here in his element. “I’m proud of having them,” he says of his ragtag roster. “It’s kind of emotional. Here they are back, to be part of this. To be back, saying, ‘I believe.’”

His three remaining assistants — Clark plans to hire back a full staff this December — are currently all fanned out on the road, selling that South Alabama pitch of immediate playing time and the idea of being first at something, or in this case, first back at it. “Maybe I was a good recruiter before,” says Clark, “now I need to be a great one. But I’ve got guys in the NFL right now that played for me last year, so I think I’ve got a little different message this time. And the fact that we’re playing big-boy football in ’17, it’s gonna be here before we know it.”

The fight for UAB football is far from over, and not just on the roster. Clark, still operating under his initial three-year agreement, will need a new contract to even be able to see the next Blazers football team play its first game. The program hit its first major fundraising milestone ahead of schedule, but more hurdles loom. Legion Field, a dismal experience on a good day, is not a permanent solution. New facilities bring in more players, which leads to more wins, which leads to more money, which leads to facility upgrades. For months now, schematic drawings of future Blazers football facilities have piled up and spilled off of a coffee table in the corner of Clark’s office.

And of course, there is the business with the board of trustees to contend with. There’s a vaguely Southern Gothic history in play here, between the university and its governors, and for all we know this is all part of the board’s grand design. The board’s history of thwarting attempts to improve the UAB football program is well documented; the real endgame here might be setting the Blazers up for more failure in order to demoralize university and civic support of the program for good, a plan much more insidious and roundabout than the spiking of Jimbo Fisher’s hiring or torpedoing plans for a new stadium outright. Don’t tell Clark that. He speaks of UAB football’s future as though it’s a foregone conclusion.

“We’re still entertainment. So when we put a good product out there, the city will want to be part of it. And if we’re putting a good product out there under the circumstances we were in last year, what if they gave us what we needed? That’s been pretty cool, to see more and more people get that. We did pretty good, I like to say, with two hands behind our backs. Untie our hands, and let’s go to work.

“We’re just gonna do it. It’s just gonna take a life of its own. Kind of where it’s supposed to have been this whole time.”

It all might sound rather grandiose. Maybe it is, a little. But maybe that’s exactly what’s required for a program in UAB’s situation to succeed: a guy who’s made up his mind that the Blazers will succeed just as steadfastly as the powers determining it will not. Wouldn’t it be funny if, at the end of this dumb, dusty road, the board of trustees found that it had accidentally hired the right man for the job?