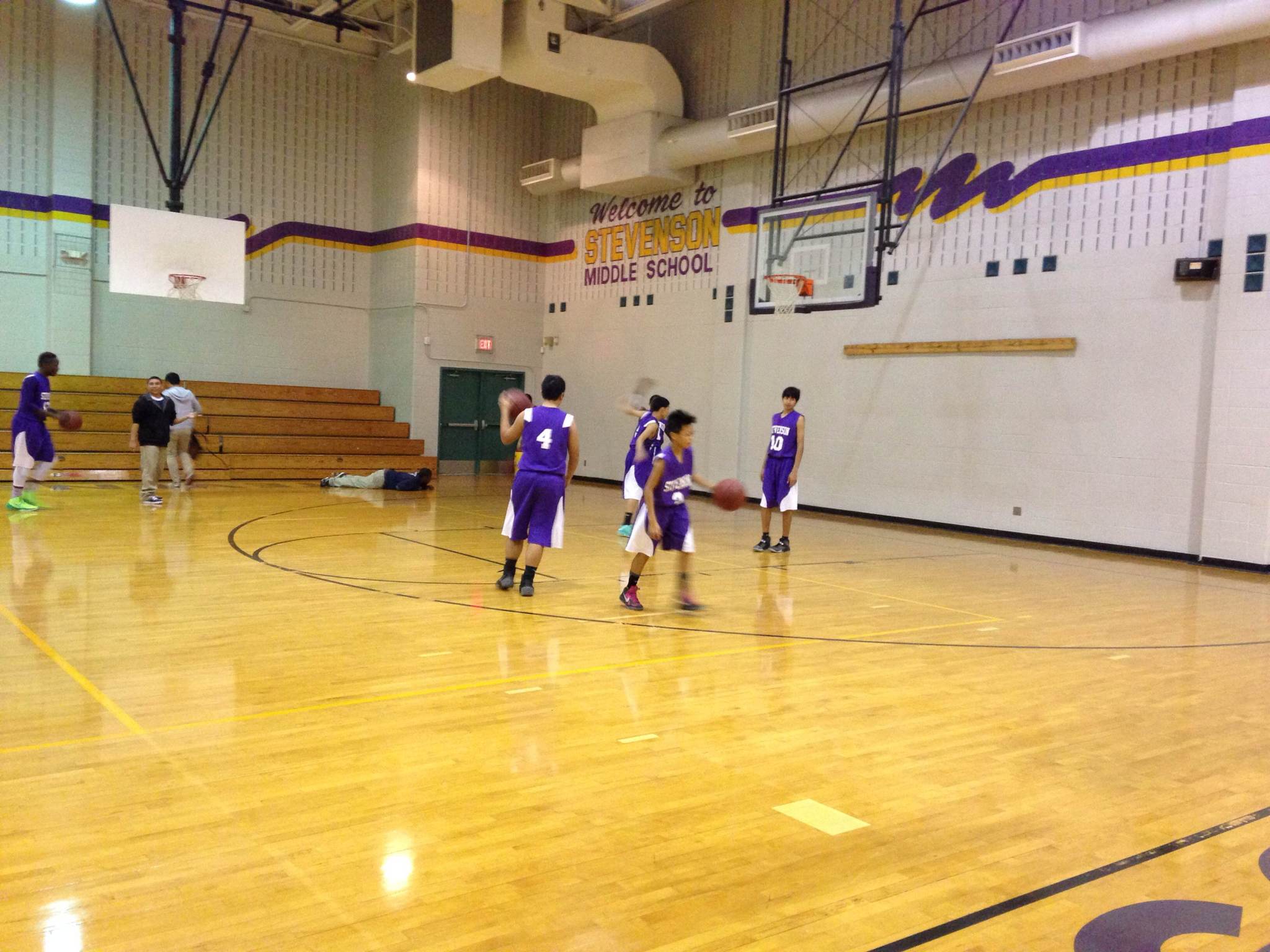 Our eighth-grade team has never, in this universe or any other, won the zone basketball championship, and that’s primarily been because of two schools: School K and School F.

Both schools almost always put out exceptionally powerful teams filled with fast, strong, and skilled basketball players who nearly always crush us. Only recently have we begun to challenge them in sports, most memorably in football, where we have beaten them out for the championship three of the last four years. But this ain’t that.

School K and School F are the lords of our zone, and I can do nothing but admit their joint suzerainty.

Neither school is one we are especially fond of. (I assume they do not say very fond things about us in their coaches’ offices, either.) Between the two, School F is definitely our biggest nemesis. And, as luck would have it, the schedule ends with our game against them, and is preceded — if you can even believe it — by our game against K.

I’d figured we’d walk the early part of our schedule easily, and arrive to the final two games against the two best teams with an undefeated record. I’d assumed we’d go unchecked, and that all the victories we’d have amassed would have swelled our team’s confidence, allowing us to perform like champions before we actually were. This confidence was all we needed to topple the oligarchy.

I am guilty, it would appear, of an oversight.

The first was against School E, always the least intimidating team on our schedule, and the second was School W, a surprise.

Our eighth-grade team beat School E by about a million points (21 real-life points). That game was only interesting during a two- or three-minute stretch of the second quarter when the Megalodon decided to bend the evening in his favor and pull a 14-0 run out of the sticky gym air. I’ll never know what it’s like to physically dominate anything or anyone, but it definitely looks like a great deal of fun.

School W, as we’d heard, was a more imposing group, undefeated through the first four zone games, same as us. They had designs on foot-sweeping School K and School F, too. Their best player stood out almost immediately in the pregame layup. He was tall and slender and fluid, and his shoulders hiked up a bit like they were trying to tell his ears a secret.

I was eager to see how the Sauce, our best on-the-ball defender and a young man of endless self-belief, was going to respond. Alas.

This is not a joke nor is it hyperbole: The referees, two unlikable ocean-trench gremlins, called 56 fouls between the two teams. This is unbelievable when you consider that if you add up the season averages for the two most foul-prone teams in the NBA last season (Kings, Nuggets), it equals 53.7 fouls per game. Also keep in mind that we play six-minute quarters. Several of our players fouled out before the fourth quarter (including the Sauce).

Still, the ending was energetic and exciting, even if it did take us more than two hours to get there.

With 10 or so seconds left, School W had possession, down by two. Their coach called a timeout. In our huddle, the eighth-grade coach explained to everyone what they all already knew: “They’re gonna try and run something to get the ball to the Shoulders. Do not let him beat you.”

The final play was as predicted: The Shoulders ran through a pick that secured him just enough of a distance from the Hammer to allow him to catch the ball cleanly. He turned as the players on his team cleared out to the other side of court. Then the Earth stopped spinning.

It was the Shoulders vs. the Hammer for the game, two teams with undefeated records, the first real test of the season for our team. The Shoulders quickly probed, but the Hammer, a staunch defender, stopped two separate drive attempts, forcing the Shoulders into what I’d assumed was a dire situation. But the Shoulders is a talent, and so he did not panic, not even one tiny bit.

There were four seconds left: The Shoulders, having been funneled baseline by the Hammer, executed a very impressive Dwyane Wade step-back move that earned him just enough room to get off a jumper.

There were three seconds left: The Shoulders hopped back behind the three-point line, then steadied himself while gathering the ball into a shooting position.

There were two seconds left: The Shoulders, suddenly for all the world looking like a tiny Ray Allen, flicked the ball up at the rim as the Hammer stretched the full length of his body, trying in vain to deflect the shot.

I don’t remember what I was saying as the ball sailed through the air (I can only hope it wasn’t a string of curses, though I can’t say for certain that it wasn’t), and I don’t remember what I was thinking (probably: OHHHH NOOOOOOOO). I don’t remember who was standing near me or whether there was even anybody else in the gym. But I know that when the ball tinked off the back edge of the rim, mercifully bouncing up and away and then into the arms of one of our players as time ran out, the Hammer didn’t yell or scream or run and jump or even smile. He just jogged back to our side of the court.

“That’s the shot I wanted him to shoot, coach,” he said. “I wasn’t gonna let him drive.”

The Hammer is a king.

Best Impression of an NBA Player Anyone Did This Week

The third member of our triumvirate of tiny guards on the seventh-grade team is Mean Joe. He is a competent shooter and reliable defender. More important, though: Mean Joe is all-capital-letters MEAN. He’s ruthless. It’s like he’s part crocodile. When I told the seventh-grade team that we could play School W, but that if we did they’d have to use a few eighth-grade boys on their team to have enough, Mean Joe’s response was quick and cold: “Good. Put all the eighth-grade boys on there. I don’t care.” Mean Joe is our team’s Isiah Thomas.

A bus full of middle-school athletes coming back from a game they just won is maybe the most dangerous place I have ever been in my entire life. Being on it is like having to spend a night in the thickest, darkest, most ferocious part of the Amazon, except instead of just outright killing you, everything in there just makes fun of you mercilessly.

At one moment on the trip back to our school this past week, Ant and the Spider got into a needling match. They were arguing about who’d win in a game of one-on-one, and were doing so loudly enough that it earned the attention of everyone else. Ant is a large fellow with naturally big frame (picture a 5-foot-8 stove with a jersey on it). He is wide and strong and growing more and more comfortable in the post. The Spider is a tall fellow with a naturally slight frame (picture a 5-foot-10 art easel with a jersey on it). I don’t know who’d win, but a game between the two would yield a net positive for everyone watching.

So these two were arguing about who’d win, when the Spider made a critical misstep. Having run out of jokes, he went with a standard jab: “Man, get outta here. You’re not ready for me.” Ant, nearly instantaneously, fired back: “Nah, you get outta here. You know what’s not ready? Them braces you got ain’t ready for that bad breath. I never seen braces melt before.”

[Scene: Sideline, four minutes left in the fourth quarter. A travel has just been called on our tiny shooting guard 3-D, who hit a 3-pointer as the whistle was blown but still celebrated his bucket all the way back down the floor.]

Me: Why are you celebrating? You heard him call travel, right?

Me: So why are you celebrating?

IMPORTANT NOTE FOR NEXT WEEK

Turns out, the eighth and final game of the season, the one we play against the mighty and gigantic School F, is one that only our eighth-graders will play. School F does not have a seventh-grade team. As such, our next game, against the equally terrifying School K, will be the last of the seventh-graders’ season. Their seventh-graders, like ours, are undefeated, so it will be a contest that decides the zone championship. The moon will vibrate from our cheers if we win, and the oceans will overflow with our tears if we lose. Stay tuned.