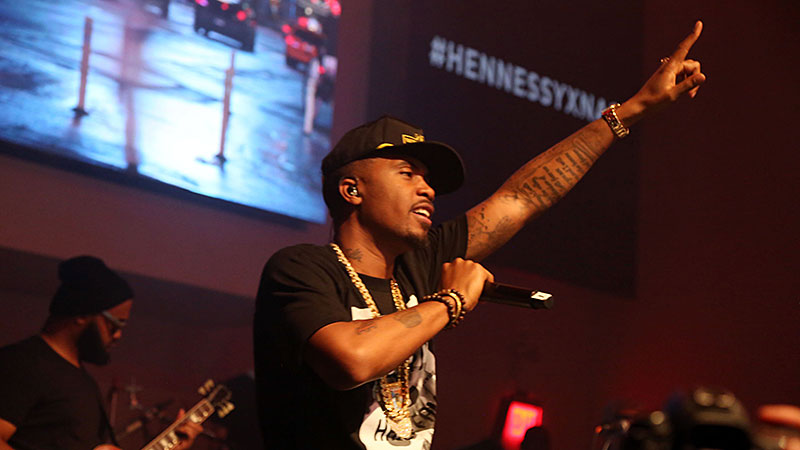 The following is a 72-hour Super Bowl Weekend inner monologue.

What do I wear? I have no idea what to wear to a corporate Super Bowl party in New York City. And it’s an ESPN party, but I can’t decide if that should make it easier or harder to decide on attire? There will be athletes, and I’m guessing they’re going to be in Affliction long-sleeves and just overall look horrible because they’re so big and awkward and human clothes aren’t really meant for them. And then there’s the old men, who will undoubtedly either fancy it up for the sake of importance or dress it down in the name of the cool. And then, I’m assuming, there will be a sea of normals, youngs and olds alike, split between dressing entirely too proper and wearing game jerseys.

You’re fine, Rembert. Just dress normal. This is your city, after all. You make the rules.

A lot of thirst in this room. I can feel it. And I like it. Oh, look, there’s Tony Kornheiser. Not far from him is Spike Lee. I wonder if Spike is enjoying the night.

What is that familiar voice? I know that voice.

[From speakers: “Shout out to the champ, Evander Holyfield!”]

THERE YOU ARE, EVANDER.

So J.D. is definitely here. Related: poor boxers. For the rest of their lives, they have to make that pose with their fists, the throw-your-dukes-up-and-prepare-for-the-fisticuffs/LeVar-as-Kunta pose. That must get old, after the 15th year of doing it.

Where is J.D.? There are so many quasi-famous people here, plus that guy in the red suit, and all I want to do is find —

Oh, hello, Bow Wow. Glad you also decided to join us. I should take a picture of J.D., but that’s not my style, so I won’t, even though I want to. Also, Bow Wow might think I’m taking a picture of him and I can’t have that.

Now that J.D.’s been safely located, we’re on to Mr. Red Suit. There’s a guy in a red suit here and I want to know why. This is not a red suit party. I understand there was no explicit dress code sent out, but that wasn’t a green light for the red suit. I kind of like the red suit, but it’s less My Beautiful Dark Twisted Fantasy Kanye red suit, and more “I’m a bellhop at a Radisson” red suit. Also, there’s some sort of Gryffindor crest on it, which is confusing. I’m very sure he’s not famous, but as the night goes on, someone might confuse him for Trey Songz, in which case the red suit ploy was a success. Let’s follow Red Suit.

[Follows Red Suit. For a while. Then I lose Red Suit.]

Oh yes. We’re doing this. Let’s hug it out, Tony Reali. OK, just got a new best friend. I’m following Tony now. Where is Tony taking us? Tony’s the MVP of the night. Good god, there are a lot of people over here. I should probably take a stealth paparazzi shot. 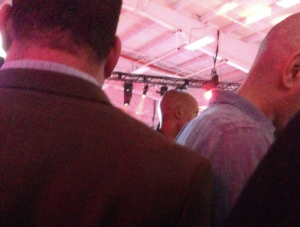 There’s Ray Allen’s head. It’s so smooth, I bet. I hope no one saw me take this. Really pumped my flash wasn’t on; I can’t be out here embarrassing my guy Reali like this.

Should I have a staring contest with Dulé Hill right now? I see him. Nope. Horrible idea. If I play it cool, I could probably become real friends with Dulé Hill at some point in my life. Oh, he’s walking by, check phone. Tripping up Dulé Hill: good idea or greatest idea? Nope. Can’t do it. But, again, only because of Reali.

I wonder where Dulé’s headed after this? Same for Skylar Diggins. Also, Red Suit. I should start thinking about the next plan. Kendrick is performing soon, and then Robin Thicke, which means it’s time to leave after Kendrick. I need to gather intel. WAIT, THIS WAS A HORRIBLE TIME TO LOSE REALI, WHERE’S MY CHAMPION?

Jesus, someone farted. I want to blame Dulé, but he walked by like 20 minutes ago. I wonder if that other guy from Psych is here. If Dulé gets a plus-one, is he giving it to other Psych guy? Or — big “or,” but important to consider nevertheless — was DULÉ THE OTHER GUY FROM PSYCH’S PLUS-ONE.

[Next to me, the voice of an angel, Grantland’s Andrew Sharp: “Is that the red suit guy?”]

HOLY SABRINA AND THE TEENAGE WITCH 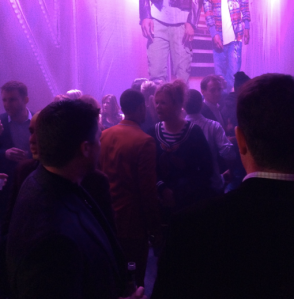 I’m about to black out. 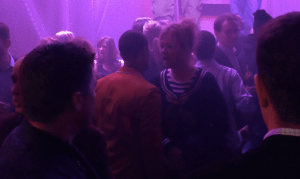 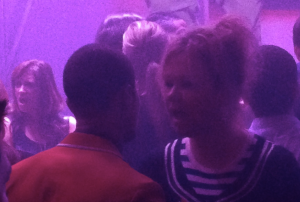 WHY IS CAROLINE RHEA HAVING A REAL CONVERSATION WITH RED SUIT?

WHAT ARE THEY TALKING ABOUT?

DOES CAROLINE RHEA THINK HE IS BIG SEAN?

RELATED: WHY IS CAROLINE RHEA PRESENT?

WHY HAVE FIVE MINUTES GONE BY AND RED SUIT IS STILL HOLDING COURT IN THE PRESENCE OF QUEEN WITCH HILDA SPELLMAN?

WHAT DID YOU SAY, RED SUIT? WHY DID YOU ANGER CAROLINE RHEA?

DID I JUST WATCHING A LIVE-ACTION TINDER DATE BEGIN, HAVE POTENTIAL, AND SUDDENLY CRASH AND BURN?

Finally. Shout out to Macklemore for introducing all these people to Kendrick.

I’m happy Kendrick’s getting his money, and that people are loving this performance, which is a testament to his skills and live show. Because he’s giving about 7 percent. Also, he has to do the radio edits of the songs, which is unfortunate. Poor Kendrick.

Rich/poor Kendrick. That’s a keeper. OK, time to go. Apparently it is Howard Stern’s 50th birthday party right now. I don’t know if that’s the move, because I kind of think my casual denim wear is going to make me the new Red Suit in that environment. Must find new plan.

This should be good, the list of scheduled attendees was pretty solid.

Oh look, there’s Aaron Rodgers. I like that. Need to find Upton and Terry Crews and Macklemore and Shay and Ratajkowski and most importantly Christopher Bosh, ASAP, but Aaron is a good start.

So I guess it’s just Aaron. Well, cool. Looks like this just became a normal bar with cool-dad chaperone Aaron Rodgers. And I’m all in.

I hope someone has a Mophie here. Maybe Nick Catchdubs will let me USB charge through his computer while he DJs. Could be a bad idea, though. It might autosync weirdly, and then we’d only be left with the “Drunk in Love” video. 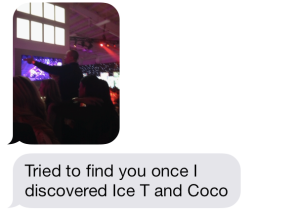 There’s an important lesson to be learned from this. You leave early, always hunting for bigger and better things, and the end result is missing out on Ice-T and Coco. Was it worth it?

There are so many parties tonight, must rest up. It’s only day 2. Revolt’s having a party with Diddy and Drake, and DirecTV’s having a party with Jay Z. Between those two, seeing Caroline Rhea with Red Suit might actually get eclipsed. Let me just get a few hours of Mario Kart in this afternoon, and then it’s officially time to never stop going in.

Too much Mario Kart. Missed both parties. But it’s fine. What could have possibly happened?

OK, that hurts. That’s actually infuriating. No amount of close races, on 150cc speed with Bowser, is worth missing Bey do “Drunk in Love” with her husband onstage. But what can you do, no need to excessively pout.

So it’s settled. I’m staying out until either 6 a.m. or I find Macklemore. Whichever comes first.

The Seahawks are actually going to win the Super Bowl. So I actually have to find Macklemore. I was joking this morning, but this actually has to happen. Well, then.

I hope no one here saw me Friday night, because I’m practically wearing the same outfit. So far, after a few minutes, no signs of repeat partygoers … OH MY GOD THERE’S JERMAINE DUPRI AGAIN.

Kelly Rowland’s onstage performing. This would be where my focus was, were Evan Turner not walking back and forth through the crowd, being as Evan Turner–y as Evan Turner could possibly be. I wonder what his favorite Kelly Rowland song is? I wonder if he was equally disappointed when she played “Dilemma” and didn’t bring out Nelly?

I have so many questions for Evan Turner. There is a tall man standing nearby who could easily be mistaken for a NBA player. I don’t recognize him. But people are giving him looks to try to figure out who he is. He’s giving looks back, seemingly in an attempt to give off the “I’m not in VIP by choice, not force” vibe. But in about 10 seconds, Evan Turner is going to walk right by him. And if he doesn’t acknowldge our tall protagonist, he’s definitely just a tall dude in a dress shirt.

NOPE. No love from Turner. Sorry, sir. Maybe next time.

Nas is playing after Kelly, but between them is Mark Ronson. It’s a shame that, occasionally, I forget that he’s the man. It’s almost 2 a.m. and Nas still hasn’t gone on, but people are still enjoying themselves.

Yep, Ronson’s now playing the a cappella version of “Valerie,” his song with Amy Winehouse, further proving my point of him being a legend.

A lot of people wearing furs tonight. I know they’re hot. They look good, though.

Everyone just forgot Nas was scheduled to perform, with the crowd making a 90-degree turn from the stage to the VIP area, just to look at the couple, both of whom were noticeably close in proximity to the sea of Instagrammers.

Yep, still happening. It’s been like 10 minutes and people are still pointing their phones toward them. 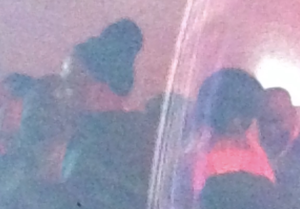 While distracting and invasive, I do enjoy the idea of watching a Nasir Jones set with Jay in the room. Or watching the two of them performing “Black Republican.” Or, on the other side of the spectrum, Nas teasing “Ether” and the world ending.

But it doesn’t matter, because Nas just started and is running through Illmatic. And we’re killing the lyrics as a crowd, which is always nice.

Wait, why is Nas’s band playing “So Fresh, So Clean”?

Nas is rapping over “So Fresh, So Clean.” But for a moment, I saw my own Rapture take place in the middle of a Hashtag Hennessy Event. But no, OutKast did not come out. But it was still wonderful.

The set was so good, I forgot that other thing I’m supposed to be doing tonight.

His whereabouts are unknown. There were rumors of him appearing at the Nas show, but when your team has a blowout Super Bowl win, plans are subject to change. I’d like to think he was in a Taco Bell drive-thru in Jersey ordering hundreds of Mexican pizzas and then just throwing them all in the air. At 3 a.m., that guess is as good as any.

But when Nas finishes, a lead emerges. A strong one. A club they call “Marquee.” Apparently, that’s where a ton of the Seahawks are.

And you know who loves Seahawks?

The problem is, I’m the Peyton Manning Last Night of getting into clubs alone. So this isn’t going to be easy. And it is cold and starting to rain, so it isn’t even going to be fun to stand in the line and watch.

So, at 3:30 a.m., the dream to find Macklemore officially ends. But the night is a success. And besides, even if on that miracle chance I did get into Marquee, all the good stuff has probably already died down. It’s almost 4 a.m., after all. At some point, you have to just call it a night. 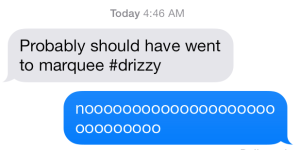