Hardwood: We Are the Champions 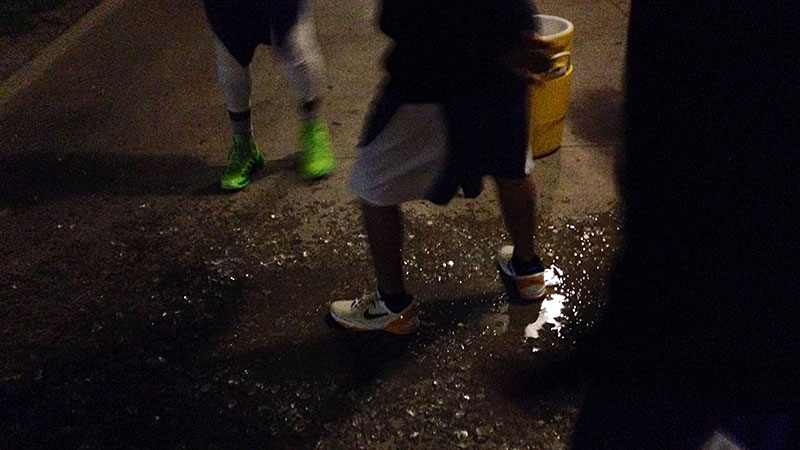 With two minutes left in the third quarter of the game against our archrivals, the ferocious School F, I knew the end of the game was no longer in doubt.

Following an errant shot, the Hammer, who has led our team in rebounds, fouls, knockdowns, TERRIFYs, and outlet passes this season, ripped the ball from the sky with his talons and flipped it out to the Megalodon.

The Megalodon caught the ball in stride, scanned the court, and computed his path of destruction. He pushed the ball forward, cut past one defender, crossed over another, and then broke for the rim.

At the very last moment, with a defender committed fully (and haphazardly) to interrupting his course of action, the Megalodon effortlessly made a no-look pass to a trailing teammate for an uncontested layup.

I turned toward the voice. It was a kid from the other team. He had moved up a row in the bleachers so he was sitting behind their bench players.

“Hey, how many assists does he have?”

He bugged his eyes and shook his head and then moved back to his spot.

By the end of the game, it was.

The game was a trouncing. There was never any point at which we were trailing, and there was never any point after the first quarter when we were not up by at least 12. It would have been neat to have a story about how we won our first-ever zone championship at the buzzer, in some monumental contest. I’d love to tell you that School F had an amazing player who nearly neutralized our attack. But that can wait until next year. Our boys, both seventh- and eighth-graders, will walk the hallways with chests full of pride. This year, a blowout win is just fine by me.

Standouts for the Season

I don’t see how the correct answer here isn’t “all of them,” given that both teams managed to win their zone championships. The Megalodon, the Hammer, the Magician, the Sauce, 2 Trans, Ant, the Train, 3-D, the Spider, and the Shark, and so on, and so on. They were all pretty remarkable. I am sad I will not have the opportunity to coach the kids from the eighth-grade team anymore. (I’ve watched basically all of them play football and basketball for the last 24 months.) I can only pray they fail the eighth grade and have to repeat it again next year.

Best Impression of an NBA Player Anyone Did This Week

This actually happened during our game against School J, but it’s still an anecdote I like.

Probably a minute or so into the third quarter, the Magician came running off a screen that he (and we) thought was going to get him open for a 3. The Megalodon tossed the ball to him as he curled, and everything looked right. But as the Magician gathered the ball, his defender charged. The defender put his shoulder into the Magician’s stomach and brought the Magician to the ground, like a linebacker would do to a running back.

They both hit the floor, arms and legs all spidered out. The Magician immediately popped up off the ground, same as the other player. He was discombobulated, but only from surprise, not from injury. He looked around, processed what had happened, glanced toward the other coach and me, then looked back at the player, and forced a smile. He patted him on the shoulder and then came walking over to our bench, rubbing his neck. The player who tackled him had a mental disability, which we’d learned about only minutes before.

“You all right?” one of our players asked.

“You want a sub?” the eighth-grade coach asked.

The Magician is an angel. He’s our team’s David Robinson.

“Do you wanna shoot it or do you just wanna give it to us so we can start playing already?” —3-D, a master talker, to a kid about to shoot to see which team would gain possession to start a practice scrimmage

“AHHHHH! It’s broken! Coach! I broke my leg! AHHHHH!” —Ant, after he tripped over another player’s foot and fell down and somehow gave himself a charley horse and for real thought he broke his leg.

MLB 35-Day Warning: How Can You Not Love These Cardinals? (OK, OK! Don’t Answer That.)