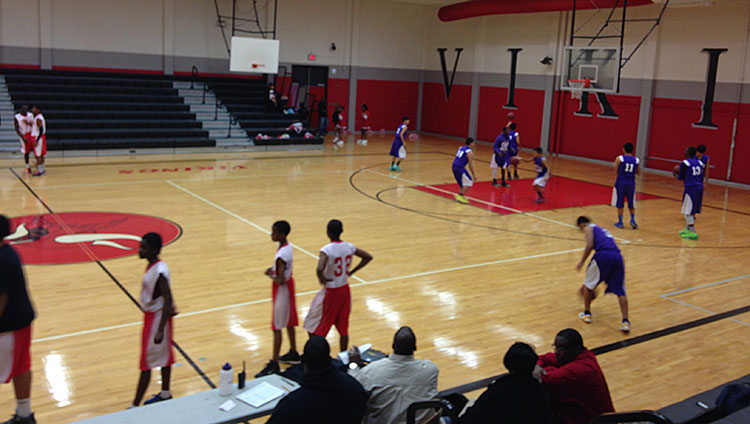 Somehow, our seventh-grade team, a group of kids who, save for one, had never played a single game of organized basketball before this season, wiggled their way into the title game. Their opponent: the terrifying, the overwhelmingly intimidating, the undefeated juggernaut School K. The location: Our gym, which, no small thing, made it the first (and only) home game of the seventh-graders’ season. The stakes: immortality.

School K had championship legacy. We were a nest of sweethearts, led by a first-year player who thinks it’s super funny to fart on people while they get dressed for practice. No greater mismatch has ever been fated. And no greater battle has ever been waged.

The Championship Game: OH MY GOD THE CHAMPIONSHIP GAME

Here’s what you need to know about our team: We’re not that great on offense. Which is why, in the championship game against School K, we managed only 10 points by halftime.

Here’s what else you need to know about our team: We don’t have to be good at offense, because our defense, which was laughable in the first couple games, has since transmogrified into a death machine.

We run a 2-1-2 zone. After eight weeks of practicing it, eight weeks of veeeeeery slowly walking through each position’s responsibilities until everyone knew exactly where to go and exactly when to move, it has become a horror matrix.

Still … we scored only 10 points by halftime. But that was OK, because School K’s otherwise high-powered offense was smothered into frustration. They netted only 14, eight of which came from fast breaks off turnovers, while the remaining six came from two “I Hope You’re There, Jesus” 3-pointers. I considered our four-point deficit a victory, as did the boys.

“These guys aren’t used to pressure,” I told our team in the huddle during a timeout, applying a convenient set of emotions to a group of kids I’d never met. “They’re nervous. They haven’t played in an ugly game like this before. We love these games. We win these games. That’s. What. We. Do. Make a push to start this quarter and they’re gonna panic.”

And then, a lightning bolt …

The Train, our best player, but also historically a quiet, reserved kid, asserted himself in the huddle. “Hey,” he said loud enough to surprise everyone. “We’re gonna win this game.” He slapped the guy next to him in the chest. “Let’s go!”

And that’s when the game turned.

For the entirety of the first half, School K sent a double-team at the Train every time he touched the ball. (He is our best dribbler, and all of the other schools know this.) By the end of the first quarter, he was flummoxed, trying to throw 40-foot passes before the trap arrived. He fumed. But he’d had enough, I guess.

At the start of the third quarter, he caught the ball on the inbound, waited for the double-team, then split it and streaked to the basket. When the remaining defenders panicked, he found Mean Joe for a 15-foot jumper.

On the following play, he snagged an errant pass out of the sky, and then Magic Johnson–ed a fast break that ended with 3-D drilling a wide-open 12-foot jumper.

The gym exploded into mayhem. It was a beautiful riot. The exuberant 3-D, perpetual celebrator, jumped in the air and punched the sky like Jordan after he hit that shot over Craig Ehlo; Mean Joe, our most tenacious player, shot fire out of his eyes. Ant, the Shark, 2-Trans, and the rest of the best popped up in glee. And the Train did what I assume was supposed to be a snarl. I knew right then we were not going to lose.

School K called a timeout. But it didn’t matter. Our boys had already begun their transformation into Young Based Basketball Gawds. When the game started back we scored two more times in a row. We were up five going into the fourth; it might as well have been 1,000.

School K fought like the longtime champions they were. They had a chance to tie it with eight or nine seconds left, after their most athletic player grabbed a rebound and began a fast break, but Mean Joe, ever the vigilante, came charging up from behind at full speed and snatched the ball away, taking with it a temporary reprieve from School K’s rule over our zone’s basketball kingdom.

Best Impression of an NBA Player This Week

We played a scrimmage early in the week. It was a typical practice game, save for one matchup: The Sauce, our loudest, most confident player, ended up having to guard and be guarded by 2 Trans, the quietest, sweetest player on the team. The Sauce is the best on-ball defender we have. And 2 Trans ain’t exactly the quickest fellow (he runs belly-first everywhere). So I expected it to be an obliteration. And I guess it was. Just not in the way that I’d not seen coming.

2 Trans shut down the Sauce. It was amazing. He pushed him and prodded him into unfamiliar places on the court. He never stopped moving on offense, which slowly siphoned away the Sauce’s energy. He occasionally fouled him on purpose to frustrate him, and he worked desperately to prevent the Sauce from even catching the ball. (“He’s only better than me when he has the ball, so I definitely don’t want him to get it,” said 2 Trans afterward, making me cry about a billion tears.) Every so often, when the Sauce’s concentration would lapse, 2 Trans would slide out toward the baseline, holler for the ball, catch it, then hyper-quickly flip up a shot at the rim before the Sauce could recover.

By the end of the game, 2 Trans was all the way in the Sauce’s head. The Sauce steamed. And 2 Trans barely even acknowledged his own very specific brand of excellence. He is our team’s Bruce Bowen.

“I tried hard.” –2 Trans, after his game against The Sauce

Best Thing Anyone Said That Wasn’t Trash-Talking This Week

Second place: “Did you watch the Super Bowl, coach? It was so boring. It was like us versus [School D].” —The Hammer, feeling especially clever

First place: “Coach, he keeps hitting me in the weenie.” —The Train, not especially fond of the aggressive defense one of School K’s defenders was playing against him

Important Note for Next Week

Big/tough/important as this game was for our seventh-graders, next week the eighth-grade team faces an equally gargantuan task: They will challenge School F, our zone’s other superpower, in the last contest of the season. If they win, they too will be basketball champions. If they lose, they will be thrown into a volcano. Just kidding. They’ll finish as co-champions.

"Jo’s beat up. He’s beat up," Self said. "I’m not going to make one excuse for him, because if you’re out there, you’ve got to perform. But certainly, he’s going to get some time off. I’m not sure how much time, but he needs some time off."