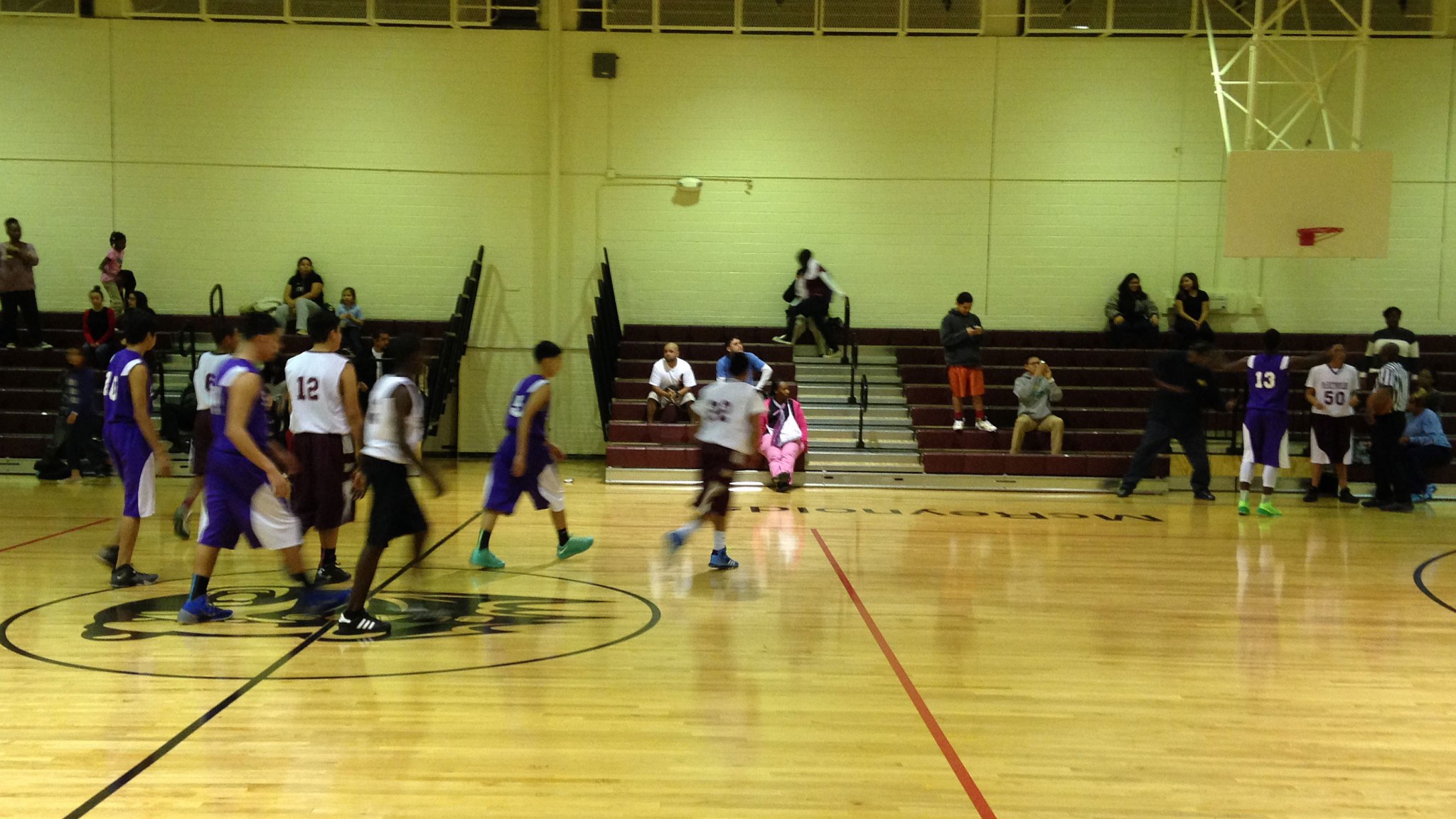 For a portion of each practice, we play quick scrimmage games.

We create the Coach Team because it sucks for kids to have to sit on the sideline for more than two or three minutes at practice, and it’s a good way to keep everyone involved. But we also do it because playing basketball is fun and so Coach and I try to sneak out onto the court and play as often as possible.

The rules are simple. Games are full court and played to three baskets (every shot is worth one point). The winning team stays on and retains possession of the ball for the start of the next game. The losing team cycles off and fusses at whoever it was that was responsible for allowing the last point to be scored (even if that person played an otherwise perfect game up to that point). It’s quick and it’s fun but sometimes it’s also quick and devastating. To wit: We (the Coach Team) quick-scrimmaged against a team of eighth-graders.

It was me, the other coach, and the three stragglers against:

The Hammer, the team’s most menacing rebounder and its midrange specialist. He plays like he grew up alternating between watching videos of shark attacks and videos of game footage of the Rochester Royals on loop. The dichotomy is charming. (Note: The Hammer shoots somewhere around 20 percent from the field, which makes him the team’s second-most deadly shooter.)

The Magician, who releases the ball up into the air during his jump shot with nearly the exact same wrist mechanics as a Criss Angel end-of-trick flourish.

The Spider, whose arms reach down to his feet and whose legs reach up to his neck. He isn’t the most proficient player on the team (this is his first year ever playing on a proper team) but The Spider is a joy. When he runs down the court, arms and legs everywhere, he looks like a tarantula tumbling down a hill, and that’s an even swap all day.

And The Megalodon, the team’s dominant predator. He is the biggest, fastest, strongest, most skilled player on the team. He used to have braces but he doesn’t anymore. Because not even orthodontia can guard The Megalodon.

So it was us versus them. And it was a bloodletting.

They inbounded it to The Megalodon. He took one dribble, raised up from about two feet behind the 3-point line, then swished a jumper. Our team missed, The Megalodon rebounded it, flew down the court, hit me with a crossover that I never saw developing, then pulled up and hit a jumper from the free throw line. Our team missed again, The Hammer rebounded it, passed it ahead to The Megalodon, who then alley-ooped a running one-handed floater up to God. God caught it, smiled at him, then dropped it softly down into the net from heaven. That was it. That was all.

The Megalodon was wearing a T-shirt that had a picture on it of LeBron James wearing sunglasses.

Our second game was against School D, which — were I to guess — exists to be beaten in sports. Our eighth-grade team was up by 15 by the end of the first quarter, and our seventh-grade team, which has exactly ONE player on it who has ever played organized basketball before this year, won going away too.

The Sauce (Eighth-Grade Shooting Guard): He is our team’s most fearsome perimeter defender; loud and fast and terrifying and wonderful. Neither his feet nor his hands nor his mouth ever stop moving. He came off the bench against School B to score eight quick points, all on layups off his own steals or steals he helped indirectly force. After the game, while the team was standing in the postgame handshake line, he hollered out to everyone at once, “I just took someone’s starting spot!” <3

The Train (Seventh-Grade Point Guard): Before this year, The Train had never played on an actual basketball team. No matter, though, because The Train, one of two Asian players on the team, is just naturally good at everything. He was the best player on the seventh-grade football team, he excels in all of his classes, he is tall and muscular and handsome and ogled by the girls on campus, and he is generally considered to be the sweetest,* most sincere kid of all by the teachers.

In the first quarter of the game against School D, The Train received the ball on an outlet pass to start a fast break. He stutter-stepped past one defender (the crowd: “ohh!”), crossed over a second (the crowd: “oohhh!”) then dribbled behind his back past a third before dropping off a pass to a trailing big man for an easy layup (the crowd: “OOOOOHHHHHH!”). As he jogged back up the court, the eighth-grade coach leaned in: “I think you have a basketball player on your team, man.”

*Before the game, the other coach and I were handing out jerseys. We hollered for the boys to come get theirs. The Train came running over before anyone else. He asked for jersey no. 7. We didn’t have a seven, so I told him that. “Aw man,” he said. I asked him why he wanted that number. He looked at me, then he looked at the other coach, then he smiled. “Jeremy Lin, Coach.” I mean, come on. That’s the best thing that’s ever been.

There is a compact little player on the seventh-grade team named The Shark. He’s a short guy, but he is built like solid oak dresser so he plays small forward. Traditionally, The Shark is a football player (a very good one, at that). He decided to join the basketball team because the whole seventh-grade team is kids that played football for our school this year.

He doesn’t know what a 3-2 zone is and he doesn’t know how to get into a full-court press. But he is an indispensable member of the team because he knows how to do one thing better than anyone else: GET. THE. BALL.

It’s amazing. He’s a maniac after it. He’s like a mama bear that’s been separated from her cub. In the game against School D, he had zero points, zero assists, and 700 rebounds. If the ball was in the air, he absorbed it into his chest like a black hole absorbing matter. If it was on the floor, he dove after it. If someone from the other team was holding it, he’d sprint over and tear it from their arms. There was one moment when he and one of the other team’s small guards both got their hands on the ball at the same time. The Shark grabbed hold and yanked it so hard that the other kid literally came both feet off the ground and was tossed through the air. By the third quarter, the other team was completely petrified of him. He’s our team’s Charles Oakley.

The Best Bit of Trash-Talking Anyone Had This Week

After the game against School B, all the players were in the locker room dressing back into their clothes. One of the boys was wearing a pair of black socks that had large holes in the front that exposed four of each foot’s toes, and holes in the back that fully exposed both heels.

Several of the kids began pestering him about them. The Sauce, an all-world needler, hollered out, “What?! HAHAHAHA! What are those?! Man, those aren’t socks! Those are ankle braces!” The Sauce is a king.

“I don’t know, Coach. I guess I play fullback rebounder.” — The Shark, when asked what position what he plays. The Shark is the best.