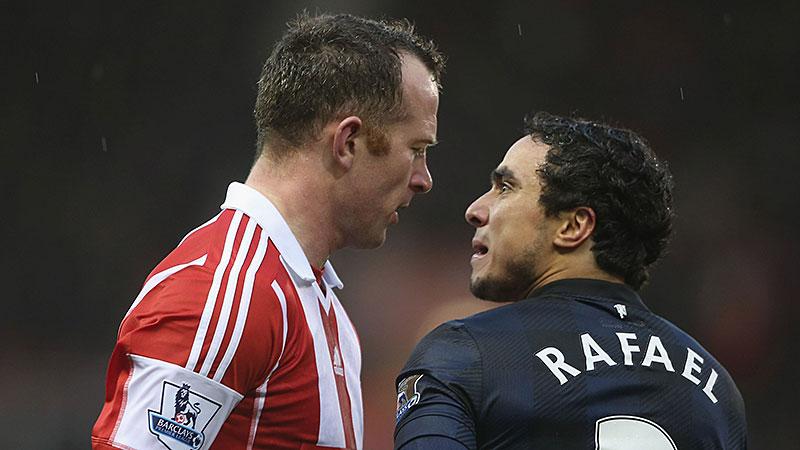 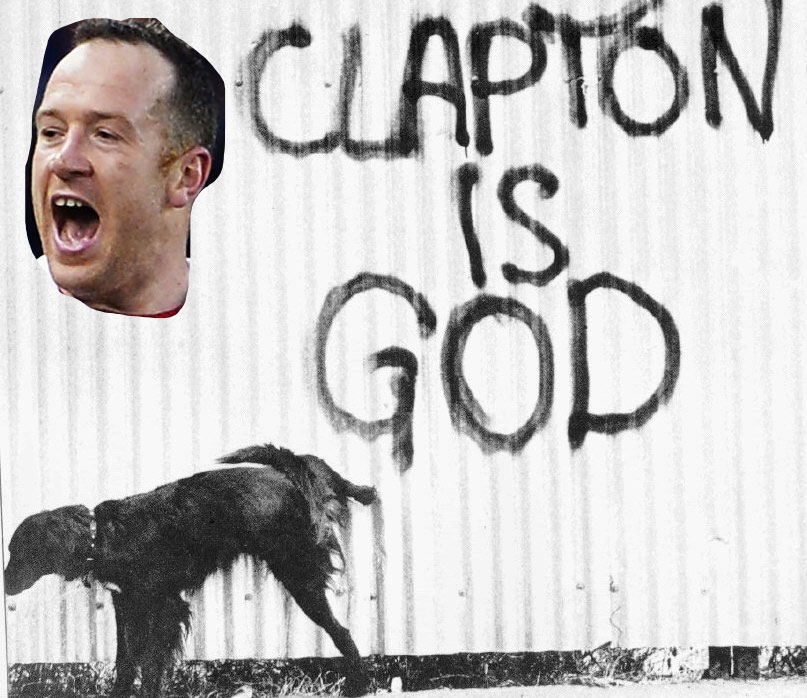 Ryan O’Hanlon: You generally get three things with Charlie Adam: (1) a couple really pretty-looking long passes that don’t make much sense until they leave his foot, (2) a handful of good corner kicks, and (3) unavoidable self-reflection concerning the linear manner in which Western society conceives of time, because Charlie Adam has seemingly never aged, while simultaneously remaining 20 years older than his birth date would suggest.

If you’re a fan of existential crises, may I recommend getting a tattoo of Charlie Adam on your back?

He scored both goals in Stoke City’s 2-1 over Manchester United — arguably his best game for Liverpool, as well as Stoke — but that’s really about it. He took more touches than any other Stoke player, but only completed 72 percent of his passes. He served up nine crosses, and one found a teammate — same goes for the six long balls he hit. But all four of his shots met the target and two of them went in. Add all that up and you get the most Charlie Adam of games.

It’s beautifully weird, watching him play. I mean, have you looked at Charlie Adam and then looked at everyone else on the field? Even the way he hits the ball — like a weekend golfer who has supreme control over his hook and refuses to fix his swing — is different. He’s an inspiration to prematurely bald twentysomethings with funny teeth, not particularly defined faces, and one sometimes transcendent body part everywhere.

He now leads Stoke in goals (!) with seven, but the passing, crossing, and long-ball numbers match up with his season averages. So, basically, Charlie Adam is one of those strikers who doesn’t do anything other than score goals — except he’s a midfielder. And yet, he can occasionally kick a ball in a way that makes you realize physics is actually an art and not a science. In a lot of ways, the Charlie Adam Experience (feel free to use that as a band name) doesn’t get any better than Saturday. Sure, he could’ve had an assist or completed some more of his longer passes, but Charlie Adam — he’s nothing if not imperfect.

The Truth About Newcastle 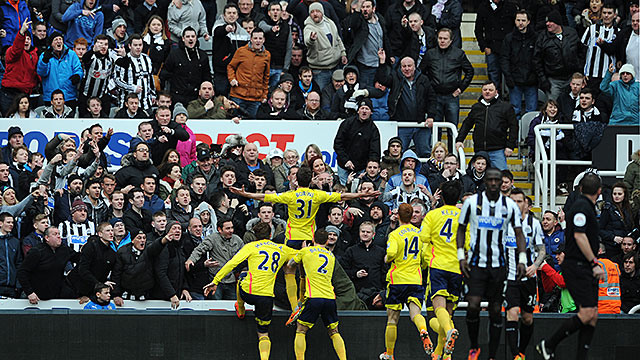 Graham Parker: Deep in the recesses of the Internet, there’s a character called “The True Geordie,” a Newcastle United–supporting, tell-it-like-it-is, bluff young video blogger, generally brandishing the latest of what’s clearly many a pint glass — symbolically, the latest glass is usually half empty — and prone to entertainingly foulmouthed rants about his team’s fortunes. (His live reaction to Joe Kinnear’s interview on being appointed director of football is particularly priceless.)

Needless to say, with Schadenfreude being the bloodsport it is around derby day in the North East, Sunderland’s second successive 3-0 victory on Tyneside (in fact the first time they’d won three consecutive games over the Toon since 1923) had many on Wearside tuned in to see just how TTG would respond to the latest setback.

In fairness to the lad, he was pretty sanguine, if phrases like, “that gutless, heartless, and fucking clueless performance” can be called pretty sanguine. And he wasn’t far off with a match analysis that noted that someone called “Jozy Altidoray” was “made to look like Didier fucking Drogba today” as he itemized the shortcomings of Newcastle under Mike Ashley’s ownership.

And the shortcomings, right now, are very apparent. Namely, without Yohan Cabaye, the one reliable source of creativity has been ripped out of a Newcastle team that looks woefully short of initiative without his influence. At the weekend, Hatem Ben Arfa was slotted in halfheartedly to try to create something from a position underneath the strikers, but after a promising opening few minutes, he slowly sidled off to the touchline as the game went on, where he found Sunderland’s full-backs, Phil Bardsley and Marcos Alonso, in resolute form.

Newcastle were awful. (The truism that if you’re outplayed by Sunderland, you are de facto “awful” may no longer quite apply in these heady Gus Poyet days, but in this case, applied to Newcastle, it’s the correct term.) The sale of Cabaye may have made sense from a profit point of view, and maybe Ashley needs the money if he’s serious about this whole Adidas business, but in footballing terms, to complete a calendar year without completing a single permanent signing, and to cap that by selling the one creative spark who can inspire those around him to do better, seems a pretty damning sequence. Don’t take my word for it, though.

Mike L. Goodman: The race for the Champions League may not be over, but that fat lady is a lot closer to appearing stage left than you might think. It may seem hard to believe that Liverpool are huge favorites, despite only having a two-point lead on cross-park rivals Everton, and three on seemingly perennial Champions League heartbreak kids Tottenham Hotspur, but that’s the situation we find ourselves in.

The race could have basically been put to bed with 14 games left to go, this weekend. An hour into their respective matches, Liverpool were winning and both Everton and Spurs were trailing by a goal. The fact that Spurs managed a draw, Everton got an extremely clutch, come-from-behind victory, and Kolo Touré brain-locked away two points for Liverpool means that the race remains competitive, but make no mistake: Liverpool are incredibly likely to hold onto the final qualification spot.

You have to consider the history here. James Grayson, who runs one of the longest-running soccer stat blogs out there, had this to say about the chances of Everton, Spurs, and Manchester United catching Liverpool:

It’s a lot harder to make up those small gaps than you might think. By the time the season is 24 games old, teams generally are what they are, and their past performance gives us a pretty solid view into their future results. That relatively slim lead for Liverpool is much safer than it appears.

Next week, Liverpool host Arsenal and Spurs host Everton. It may be tempting to think of those games as determinative of who will have the upper hand in the race for fourth, but that’s not the case. Really, those games will determine whether Liverpool’s challengers have an outside chance at unseating them, or virtually no chance at all.

It is, however, worth keeping in mind that “virtually no chance” and “actually no chance” are not the same thing. After 28 games last season, Arsenal sat five points behind the Champions League spots, and a full seven behind Spurs. They finished in fourth and Spurs ended up a point behind them in fifth. So, it can be done. It has been done. It’s just not particularly likely to be done again.

Brett Koremenos: In case you missed it, the relegation battle took a turn to crazy town this past weekend. Crystal Palace’s loss and West Ham’s, Sunderland’s, and Cardiff’s victories all but eliminated any separation at the bottom of the table. Seven clubs are now within three points of the drop zone. In other words, Stoke, currently sitting 11th, after a historic win over Manchester United, are just a couple poor performances away from finding themselves in a world of hurt. It stands in stark contrast to the landscape we saw in December, when Palace and Sunderland looked utterly hopeless, and Fulham’s aging squad was descending to the bottom of the table.

Speaking of the West London club, perhaps the most intriguing aspect of this weekend is that the 19th- and 20th-placed teams (Cardiff and Fulham) did the most to boost their chances of staying up in the recent transfer window. The Cottagers may have been ambushed by Southampton this weekend, but some of their recent additions — Clint Dempsey, William Kvist, Lewis Holtby, Johnny Heitinga, and Greek striker Konstantinos Mitroglou — give them some real hope moving forward. Meanwhile, Kenwyne Jones and Wilfred Zaha have already given the struggling Bluebirds a lift with their performances in a win over Norwich City. The talented Zaha, despite being unable to carve out a role at Old Trafford under David Moyes, could still easily turn out to be the most impactful addition made by any club currently residing in the bottom half of the table.

Having your club just miss out on the league title or final Champions League spot can certainly be a gut-wrenching feeling, but it may not compare with being a mere point or two away from that coveted 17th-place finish. Even with the help of parachute payments, the financial repercussions of being relegated from the Premier League are so extreme that they can completely alter a club’s fate (hello, Wolves!). With such dire consequences, this past weekend’s results, in addition to the desperate attempts to add impactful personnel throughout the month, mean the stage is set for what promises to be a tense, unpredictable battle for the right to stay in England’s lucrative top flight.

Goodman: What’s a manager to do when four of his top-five central midfielders are unavailable to start on a Premier League weekend? Well if you’re Arsene Wenger and Arsenal, you just call upon one of your most talented young wing prospects (who to be fair has occasionally deputized in the middle before), plug him in at a minute’s noticem and watch Alex Oxlade-Chamberlain score two extremely pretty goals.

The first on a gorgeous off-ball run capped with an extremely smart and technically brilliant first touch.

And the second on an incredibly slick back heeled give-and-go with Olivier Giroud. With a special thank you to Crystal Palace keeper Julian Speroni for somehow not managing to keep the ball out of the net.

Both goals are examples of the kind of penetrative runs from deep midfield positions that Arsenal have seemed to be missing lately. The team is perfectly capable of winning without those runs, but their performances tend toward the slow and inevitable, as opposed to the electric and exciting attack they churned forward at the season’s start. Ox provided the thrust Aaron Ramsey had brought to the team before his injury.

Of course, part of what made Ramsey so special is that his attacking sense was paired with an incredibly high amount of defensive activity. Ox didn’t have a lot to do, defensively, this weekend against a Crystal Palace team well on its way to adopting the tried-and-true never-keep-the-ball-in-midfield style of Tony Pulis. It’s a lot easier to run into the box from the midfield when you’re not leaving a man behind you, and you’re being marked by the opposing team’s supposed striker.

Ox is a nice option to have, and a promising and skilled young player, but he isn’t anything close to a long-term answer in the center of the field. For that, Arsene needs to get Ramsey, Wilshere, Flamini, and the newly acquired Kim Kallstrom up to 100 percent fitness and 100 percent un-suspended-ness. Hopefully it happens before the title slips permanently out of their grasp.