Greinke vs. Quentin: The Official Breakdown 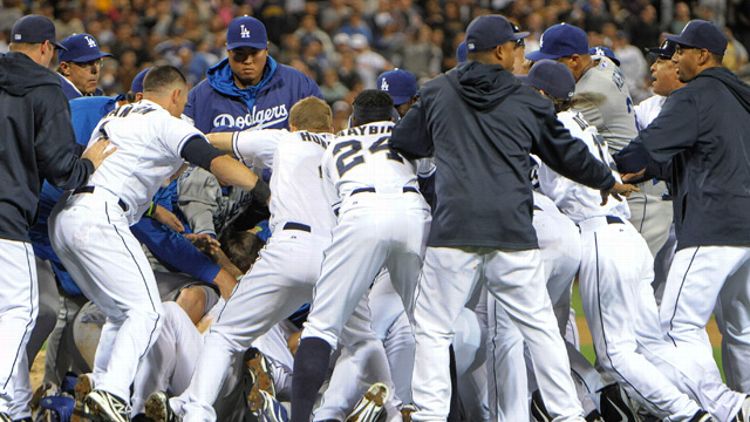 Zack Greinke’s out until June, Carlos Quentin has caused 1,000 “What did they teach you at Stanford??” jokes, and everyone else is trying to sort out what happened. We’re half a day past the Petco Punchout, still trying to figure out what the final fallout will be.

If you missed it, Quentin came to the plate leading off the bottom of the sixth inning of last night’s Dodgers-Padres game. With the count 3-2, Greinke threw an 89-mph fastball, hitting Quentin in the left arm. To narrate everything that happened next, let’s bring in the great Vin Scully:

A bit of “just the facts, ma’am” on what we’re seeing first.

• Quentin has a reputation for hanging over the plate. But as former big league pitcher and current social media hound C.J. Nitkowski tweeted, Quentin was standing a good distance from the plate this time.

• The intent of the pitch aside, Greinke has been accused of instigating the fight by throwing his glove to the ground and saying something to Quentin. He did indeed throw his glove, and he indeed say something (see the 3:09 mark of the video, though good luck deciphering exactly what it is Greinke said — it was brief, anyway). But the replay shows Quentin walking toward Greinke before Greinke went into the glove-chuck routine. We’ll get to whether or not Greinke was trying to hit Quentin and the two players’ history in a bit. But it’s not like Quentin was strolling to first base and suddenly Greinke unleashed his best Muhammad Ali trash-talk routine.

• Matt Kemp might have been the angriest guy in the entire episode. At the 9:12 mark at the video, the replay shows Kemp nearly getting hit, too. Only it was an 0-2 pitch, not 3-2, and it just missed his head, as opposed to a plunk in the fleshy part of his arm. Also Scully deserves all the Emmy Awards for his narration of Kemp yelling at the umps (4:25): “‘That’s fertilizer,’ says Kemp, over and over.”

• Check the 5:12 mark. Jerry Hairston Jr. suddenly sprints all the way from the Dodgers’ dugout to just shy of the Padres’ dugout, seemingly for no obvious reason. After the game, Hairston said he ran over because at least one member of the Padres was cracking jokes about Greinke getting hurt — he’s out until June because in an attempt to block Quentin’s charge, he led with his left shoulder, and the resulting impact broke his collarbone.

Now we need to answer some questions.

Why did Quentin charge the mound?

ESPN Stats & Info shares some of the history between Greinke and Quentin:

July 18, 2008: With two on in the bottom of the first, Greinke hit Quentin to load the bases, and the Chicago White Sox went on to score five runs that inning. Quentin then led off the second inning and homered to left field.

April 8, 2009: In their first meeting the next year, Quentin struck out in the bottom of the first, in an at-bat that included a high-and-tight pitch. Greinke then hit Quentin between the shoulders in the fourth inning. Quentin took a step toward the mound before plate umpire Bill Hohn jumped in front of him. Greinke said afterward, “The first at-bat kind of scared me because you never want to do that to anyone. It happens. You hit guys sometimes.”

April 9, 2013: In the first game of this series, Dodgers reliever Ronald Belisario hit Quentin with a high and tight fastball, right in the right wrist. Quentin had to leave that game and missed the next one recovering from the bruise.

Greinke is the fourth pitcher to hit Quentin three or more times, and in total 18 pitchers have hit Quentin at least twice in his career.

As the White Sox blog South Side Asylum noted, in Quentin’s mind his history with Greinke might go beyond the three times Greinke’s hit him. As a Royal, Greinke pitched worse against Quentin’s White Sox than he did against just about anyone else. And of the 39 batters he hit as a Royal, nine were White Sox. Read the post, which alleges that those two facts aren’t merely coincidental.

Did Quentin charge because Greinke is unique in plunking him multiple times?

Most definitely not. Quentin’s been hit by pitches 232 times as a pro, 115 times in the majors, 116 times in the minors. As Baseball America‘s Ben Badler noted, Quentin holds the all-time record for most times getting hit in an NCAA game, doing it five times against Florida State in 2002 while playing for Stanford. Quentin is one of the most prolific HBPers of all time, as the table below shows:

And as long-time Dodgers writer and blogger Jon Weisman tweeted, 93 different major league pitchers have plunked Quentin with pitches, with Jon Lester and Erik Bedard also bopping him three times each, and Nick Blackburn doing it four times. The good news for Quentin is that Blackburn’s fastball is so slow, you could catch it in your teeth.

It’s tough to say for sure one way or another. Considering only the circumstances of this at-bat, you’d say it’s really, really unlikely. On a 3-2 count, leading off the sixth inning, up one run, your team widely regarded as a playoff contender and maybe even a World Series contender, there would seem to be no earthly reason for Greinke to hit anyone. The counterarguments here would be first, their history, and second, that Greinke is considered to have better command of his pitches than just about anyone in the game. So if this were really a spot where he couldn’t afford to put a runner on, how could he have possibly missed his target by such a wide margin?

• Even pitchers with supreme command can let one get away on occasion.

• There’s a difference between a pitcher deliberately trying to injure batters and a pitcher claiming the inside corner for himself to prevent fearless hitters from leaning over and jacking 425-foot homers to the opposite field. Pedro Martinez was infamous for throwing inside, and there’s no doubt he did so deliberately, given his own terrific command and that he had no problems boasting about his brush-back approach. Still doesn’t excuse, say, Reggie Sanders, from, say, charging the mound after, say, getting hit by a Pedro pitch, say, in the eighth inning of a perfect game. Though circumstances matter, there’s also this: In most cases, you can give the pitcher the benefit of the doubt; he may or may not have wanted to hit the batter, or if he did he at least did it in a way that wasn’t going to get anybody hurt. There’s no ambiguity about a 240-pound man charging a pitcher at full speed. He’s trying to rip the guy’s head off.

• On the point about pitch location, even if you wanted to ascribe malice here, Greinke hit Quentin in the arm and really didn’t come close to smacking him anywhere dangerous. (OK, except for here.)

What did Greinke and Quentin have to say about it?

Quentin: “Myself and Greinke have a history. Dates back a few years … It’s been documented.”

Greinke: “He always seems to think I’m hitting him on purpose. That’s not the case.”

Thing is, these statements needn’t be mutually exclusive. There certainly is a history at work here. And it’s also possible that Greinke simply happened to hit him a few times, just as Blackburn, Bedard, Lester, and many others have. And even if Greinke wanted to hit Quentin in the biceps to send a message, the Padres can’t be thrilled that one of their best hitters, who also happens to be terribly injury-prone himself, put himself at risk by charging Greinke. That’s aside from the Padres players who apologized to Dodgers catcher A.J. Ellis for their teammate’s actions.

Should an eye-for-an-eye apply? If Greinke’s out until June, should Quentin’s suspension last that long, too?

As a process-over-results guy, my answer to that kind of question is always going to be no. What if Quentin never laid a hand on Greinke, only Greinke tripped on a pebble trying to dodge Quentin, suffered the worst ankle injury in baseball history, and never pitched again? Do you kick Quentin out of the big leagues forever? Or what if Greinke doesn’t get hurt at all? Does that mean Quentin shouldn’t miss any time?

I’m not a fan of pitchers deliberately throwing at hitters (particularly when there’s real intent to harm), nor do I like hitters charging the mound, or the fights that ensue. Yes, players need to know they can feel safe doing their job, and that they’ll have someone watching their back who’s prepared to stand up for them if need be. But there’s a lot to be said for jacking a tape-measure homer or striking out the side as retribution, rather than putting your team in a bad spot with the injuries and suspensions that inevitably result from brawls. In absolutely extreme cases, do what you have to do. Other than maybe some grudge-harboring, this did not ring true as an extreme case, or a justified case, for a mound-charging and a brawl.

Quentin should be suspended long enough for it to hurt, maybe matching the length of a 15-day DL stint. And I’ll continue to hope that brawls remain very rare, because baseball’s a much better game when the best players are playing, not gathering splinters.

Should Kemp and Hairston be suspended, too?

Absolutely. You could argue they were trying to defend their teammates and their team’s honor. But they still escalated a conflict that would’ve settled down quicker without their actions, Hairston sprinting from one dugout to the other after the fight appeared to be over and Kemp looking like he wanted to take on the whole Padres team. Kemp confronting Quentin in the players’ parking lot after the game makes his offense a graver one. If Padres pitcher Clayton Richard hadn’t been around to separate the two and Kemp jumped Quentin there, he’d be the one who’d deserve the steepest suspension, even bigger than whatever Quentin gets. Hell, outside the field of play, you could have justified an assault charge had things devolved to that point.

Is the passage below the best case of baseball-related Wikipedia tampering ever?

The Padres visit Dodger Stadium on Monday night. Let’s hope the league has the good sense to rule on suspensions and handle any potential appeals between now and then. No one benefits if this escalates any further.