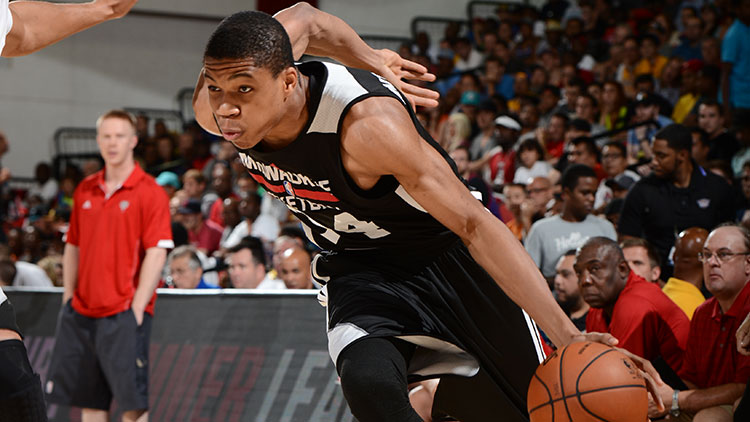 There are countless magic shows in Las Vegas unworthy of your time, but the one that was worthy, the one conveniently right in front of you, you probably missed anyway. Milwaukee Bucks wunderkind Giannis Antetokounmpo split himself in two. It took 12 seconds. In those 12 seconds, he led two lives — six seconds here, six seconds there. He was playing hard, but his Bucks were losing badly to the Spurs at the Las Vegas summer league. Some things never change. Some things aren’t Giannis. He is a shape-shifter or, given his build, maybe it’s more accurate to say he’s a Transformer. He’s reportedly grown two inches since being drafted last summer, to a towering 6-foot-11, and added more than 25 pounds to his frame — most of it seen in his upper body. Crows could perch atop his reupholstered shoulders and breathe easy. There’s plenty of room up there.

With the Bucks down 31 to the Spurs late in the fourth quarter, you had every right to turn away. Antetokounmpo brought the ball up the floor and nonchalantly whipped a pass behind his back to his big in the high post. Six seconds. The ball was passed back out to former Wisconsin Badgers hero Ben Brust, who was ready to initiate a side pick-and-roll. Giannis screened and rescreened, sliding right into the role of smashmouth big. Another six seconds. In 12 seconds, Antetokounmpo went from Ricky Rubio to Amir Johnson. Magic.

The buzz out of the Bucks camp during summer league was new head coach Jason Kidd’s intent on experimenting with their 6-foot-11 player as the team’s primary ball handler. In interviews, Kidd bristled at codifying Antetokounmpo as a point forward. He was much more receptive to “point guard,” though, really, it’s all more or less a roundabout. The sanctity of position names seems silly when you’re watching Antetokounmpo with his wings spread wide. The list of things he could be is endless. We all eventually come to the realization that we’re never going to be everything to everyone. But what monster would deliver that news to this:

Kidd isn’t Lewis or Clark. The frontier had already been discovered. Antetokounmpo was originally scouted as a 6-foot-9 point guard in Greece, a country with a notable lineage of oversize point guards (Teo Papaloukas, Dimitris Diamantidis, and Nick Calathes, to name a few). How did Giannis fare performing his sacred duties? Well, he scored pretty efficiently; he also averaged nearly an entire turnover more per game than assists, steals, and blocks combined. In his final summer league game against the Spurs, Antetokounmpo finished with six turnovers and no assists; Kidd and Bucks summer league coach Sean Sweeney logged zero worries apiece.

Results are irrelevant at this stage. It’s about seeing what you have. Antetokounmpo single-handedly served as the folk remedy for the Bucks’ ennui last season. With a new setup to play with, Kidd is looking to concoct a more sustainable salve for Milwaukee — something he might not have been able to produce for the Nets had he stayed in Brooklyn. Kidd turned a loathsome situation (made worse by Brook Lopez’s foot injury) into an interesting case study on defense in the modern NBA. With their Goliath nursing his foot, Kidd rolled out strange small-ball lineups that looked away from position and built a rotation consisting of very specific kinds of players. But how do you reincorporate a player who is the antithesis of the makeshift identity you’ve successfully cultivated? The post-Lopez Nets of last season were a strange video-game fever dream that almost worked. But what were the odds of Kidd topping that?

His offseason power demands were laughably tone-deaf, and his departure from Brooklyn was equally questionable. While he was still a Nets employee, Kidd reportedly advocated for a trade that would land Larry Sanders and Ersan Ilyasova, two players who would’ve fit his roster mold perfectly, for Brook Lopez and Mirza Teletovic. The trade obviously never happened, and here we are, with Kidd jumping ship and getting what he wanted in Sanders anyway. Maybe Andrei Kirilenko was right: Maybe Kidd couldn’t handle the pressure of coaching in New York. But I can’t say I’m not fascinated by the palette Kidd has to work with in Milwaukee, where he is free to tinker and conceptualize in front of an audience that knows it can’t go any lower than rock bottom. He’s shown the ability to think outside conventions and squeeze utility both on a macro (Paul Pierce as small-ball 4) and micro (the spilled-drink controversy) level. And if you’ve ever set Lamar Odom or Anthony Randolph as your all-time point guard in NBA 2K, how can you begrudge a man willing to embrace a 6-foot-11 point guard in real life?

Turning Antetokounmpo loose was the first step in Kidd’s roster experimentation over the next few months. It doesn’t hurt that the decision has generated intrigue in the press and empowered one of the team’s cornerstones to embrace his creative impulses. Despite functioning as the “point guard,” Antetokounmpo was listed as the center in two of his four summer games. He is in the rare company of Magic Johnson (1980 NBA Finals, Game 6) and LeBron James (2012 NBA Finals, Game 1), of lead ball handlers who have also jumped at tipoff. This is the breadth of Antetokounmpo’s reach. Each possession is an opportunity for Giannis to transform into something new. He’s the video-game fantasy come to life, and he now has the perfect coach behind the joystick.