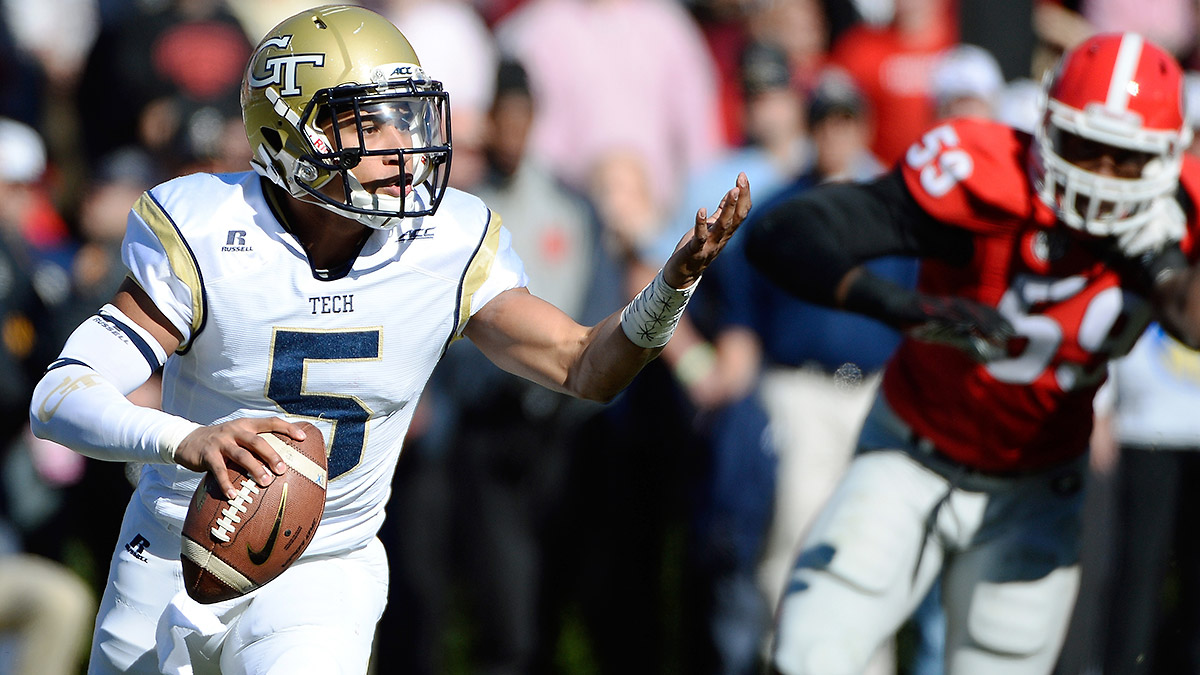 College football fans don’t agree on much, especially where the forthcoming playoff field is concerned, but as the season has unfolded, the nation has unified around one thing and one thing only: the deeply rooted belief that Florida State must be stopped. As defending national champions and winners of 28 straight games over two full calendar years, the Seminoles are natural antagonists, immediately recognizable heels in the same mold as the Patriots or Nick Saban or Anne Hathaway or just about anyone else who happens to parlay talent and resources into wild, protracted success while also exhibiting any perceived trace of a personality flaw.

But FSU’s flaws run too deep for us to enjoy them as cheeky, love-to-hate kind of villains. The Noles’ shortcomings involve a toxic docket of alleged crime and corruption.1 On the field, they’re serial underachievers with a habit of just getting by on the bare minimum, overcoming weekly bouts of half-assed dithering and recklessness by dint of their overwhelming talent alone. FSU has yet to play up to its blue-chip potential for more than a quarter or two at a stretch. This may be the first undefeated team in history that’s even more exasperating to its actual fans than to the legions of hate-watchers.

Even the playoff committee has felt compelled to register its ongoing disappointment with the Noles, first by dropping them from no. 2 to no. 3 in its weekly poll, and most recently from no. 3 to no. 4 following last weekend’s graceless, turnover-marred victory over Florida. Still, at 12-0, Florida State is the only remaining undefeated FBS team, and if it prevails in this weekend’s ACC championship game, it will assure itself a place in the four-team field. At that point, anything can happen, and with this outfit, the most infuriating options are the most likely. Everyone has been waiting for weeks for the Seminoles to careen over the edge they’ve stalked all year; what if they finally do, and turn one of the long-awaited semifinal games into an anticlimactic stink bomb? Worse, what if they don’t, and win the whole thing?

Standing between FSU and its disquieting destiny is no. 11 Georgia Tech, champion of the ACC’s Coastal division, which will enjoy a groundswell of moral support Saturday from multitudes of viewers who haven’t watched a Georgia Tech game in ages, if ever. The Yellow Jackets are latecomers to the national stage, having spent the vast majority of the season lurking on the fringes of the polls,2 before closing with back-to-back upsets over then–no. 19 Clemson and then–no. 9 Georgia. At 10-2, the Jackets are the antithesis of Florida State: an overachiever with a track record of confounding more talented opponents with discipline and precision. In the span of a few hours, they can end FSU’s winning streak and significantly alter the playoff terrain at the last minute. But are they good enough to hold off the somnambulant Seminole juggernaut once it feels sufficiently threatened to break out of the doldrums? 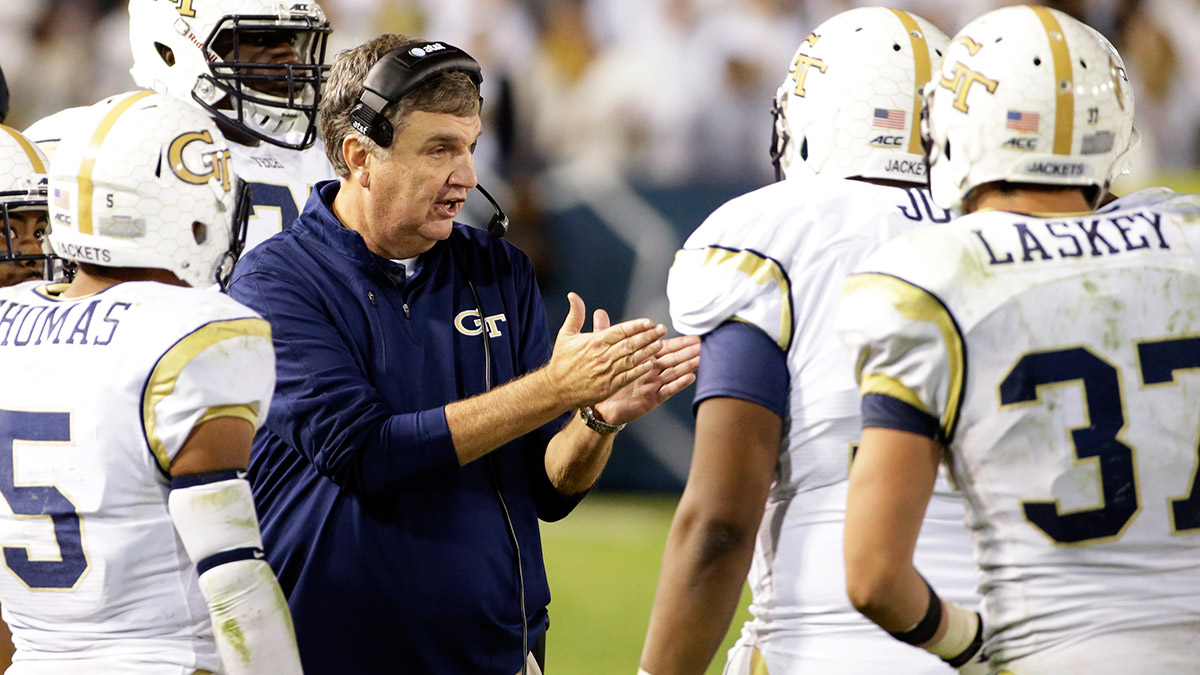 Paul Johnson looks and sounds like a salty, regimental throwback from the drill-sergeant school, like one of the few guys left who’d be right at home in a pair of nut-hugging Bike coaching shorts, and that persona is inseparable from his offense, which belongs to the same era. While Johnson has always insisted on lumping his system in with the “spread option” attacks that have proliferated since the turn of the century,3 to the naked eye his take on the option is decidedly retro: fullback on the dive, quarterback reading the end, wingback trailing for the pitch. Rinse, repeat. From a sheer quantity standpoint, Georgia Tech has averaged upward of 50 carries per game each of the last six seasons, rivaling the option schemes at Army and Navy — where Johnson coached before taking the reins at Tech, and where protégé Ken Niumatalolo has continued the triple-option lifestyle — as the most consistently ground-oriented attacks in the nation. Rushing plays in that span have outnumbered passes roughly four to one, and the Yellow Jackets have finished in the top six nationally in time of possession three years in a row.

In the context of the up-tempo, no-huddle revolution, the overall effect can seem … well, frankly, kind of quaint. Johnson has heard his system derided as a “high school offense” so many times over the years that he occasionally trots the line out himself after a win as a way of poking back at the skeptics. This summer, that group seemed to include the majority of the country: Most outlets prior to the season picked Georgia Tech to finish fifth or worse in the ACC Coastal, and the Jackets didn’t earn a single Top 25 vote in either of the major preseason polls. On the heels of a deflating, 7-6 finish in 2013,4 Johnson’s name began to crop up on lists of coaches on the proverbial hot seat amid rumors that he had lobbied the school to buy out the remainder of his contract.

These days, the notion that the bloom has wilted on Johnson or his singular philosophy looks like an absurd, fleeting footnote, as does the idea that a 10-win campaign represents some kind of “redemption.” A validation, maybe, but a redemption? Nothing has changed about the way Johnson goes about his business from one year to the next. Redemption, his ass. The peddlers of condescending stereotypes are the ones who need to be redeemed. 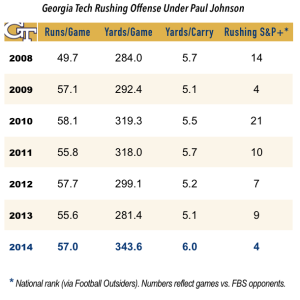 From a quality standpoint, 2014 has been the best season yet for his triple-option attack, yielding Johnson-era highs for rushing yards per game (343.6) and yards per carry (6.0) against FBS defenses; in their last three trips outside of Atlanta, the Jackets have racked up 465 yards on the ground at Pittsburgh, 479 yards at NC State, and 399 yards at Georgia, combining for 15 rushing touchdowns in the process. The offense as a whole leads the ACC in both total offense and scoring offense, at a pace that’s on track to break school records for yards and points in a season, and leads the nation in third-down conversions. After dodging the subject in the offseason, Tech athletic director Mike Bobinski finally offered Johnson a long-awaited contract extension earlier this week.

Characteristically, the production has been divvied up among a rotation of a half-dozen mostly interchangeable backs. The notable exception this season has been redshirt sophomore quarterback Justin Thomas, a prime-time athlete who spurned the likes of Alabama and Florida State (where he would have been typecast as a cornerback) for the opportunity to be the triggerman in a system ideally suited to his strengths. As a rusher, Thomas has been a reliable asset, churning out a team-high 861 yards on 5.2 per carry; at that pace, he’ll finish as Tech’s first 1,000-yard rusher since 2010. More important, because the quarterback’s split-second reads often dictate who winds up with the ball in his hands on a given play, Thomas is the engine of the offense even when handing off or pitching to someone else. And as limited as he is as a passer, within the system Thomas has managed to post the best pass efficiency rating (154.3) among full-time ACC starters, with 16 touchdown passes to just four interceptions. In that respect, he’s the anti-Jameis.

The biggest misconception about Johnson’s philosophy is that it’s a staid, cloud-of-dust affair, which couldn’t be further from the truth: In conference games, Tech has averaged more yards per play than any other ACC offense, largely because the boom-or-bust passing game is designed specifically to facilitate big plays against run-obsessed secondaries. Collectively, Jacket receivers have averaged 17.8 yards per catch, best in the nation among Power 5 teams; when not blocking, exceptionally named wide receiver DeAndre Smelter exists almost exclusively as a big-play threat, averaging 21.5 yards every time he touches the ball. He’ll be sorely missed on Saturday night after tearing his ACL in the win over Georgia, but creating big-play opportunities against the one guy on defense who’s not selling out to stop the option is one of the central goals of the offense, and the downfield openings for 6-foot-5, 240-pound senior Darren Waller will certainly exist. If the defense continues its penchant for creating turnovers — Tech has 17 takeaways in its five-game winning streak — against the most turnover-prone offense in the ACC, one successful bomb could make a decisive difference. 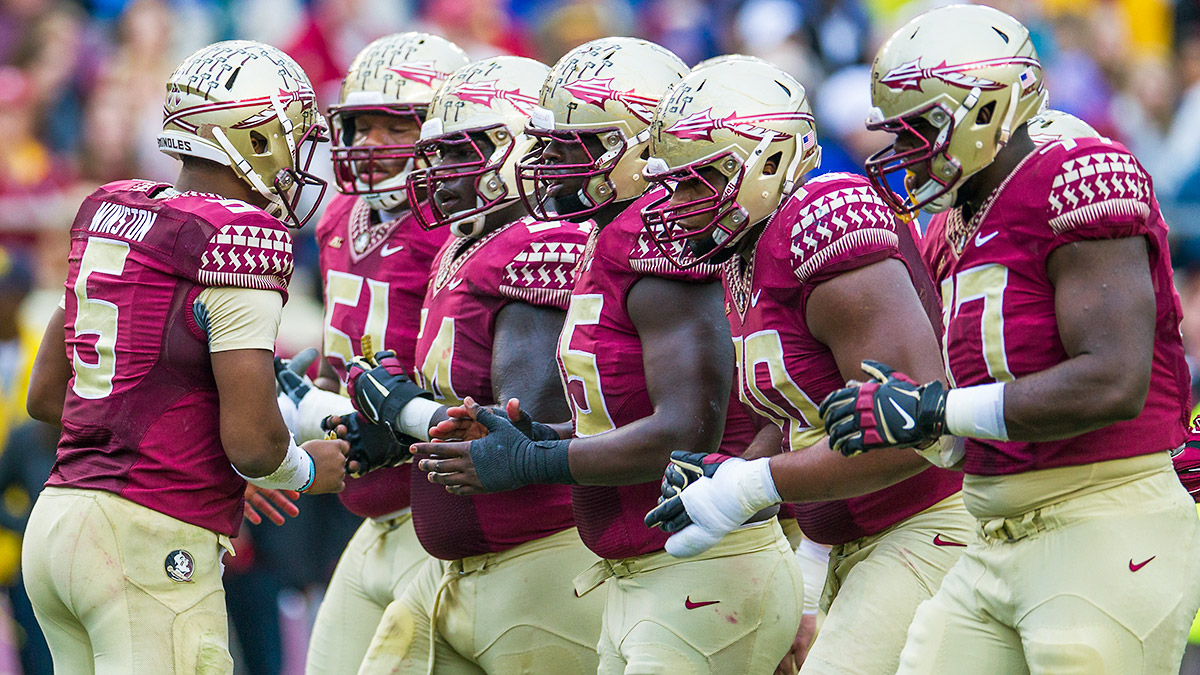 It’s not saying much to suggest Georgia Tech can “compete” with Florida State: Really, who can’t? Nine of the Seminoles’ 12 opponents in the regular season found themselves within one score (if not in the lead) in the fourth quarter; the only exceptions were the Citadel, Wake Forest, and Syracuse, three teams with a combined 4-19 record against FBS competition. Meanwhile, Georgia Tech’s only losses this season, back-to-back lapses against Duke and North Carolina in mid-October, came by a combined 11 points. Since the UNC game, the Jackets have dispatched four straight ACC foes by at least 22 points apiece and climbed out of their own graves at Georgia. FSU is favored on Saturday by only four points. A close game is a given.

So, big-play prowess notwithstanding, the Yellow Jackets’ most obvious advantage against Florida State will be their capacity to mount extended, clock-melting drives as a standard feature of the system. FSU has trailed in the second half in five different games this season; in three of those (against NC State, Louisville, and Miami, all on the road), it trailed by double digits. If the Seminoles fall behind again on Saturday night, their opportunities to play catch-up may be severely limited by Georgia Tech’s grinding approach, which at its best can limit opposing offenses to as few as three or four possessions in an entire half. (In Tech’s 28-17 win over Miami, for example, the Hurricanes managed just seven full possessions for the game, and only three after halftime; the Jackets monopolized possession for 40:45 in a 60-minute game.) To close the regular season, Tech held at least a 10-minute advantage in time of possession in four straight games, all wins.

For most offenses, time of possession is an archaic, meaningless statistic. For an archaic offense, though, it may be the most relevant. After all, Winston won’t be able to work his comeback magic if he can’t get his hands on the ball. With enough of a head start, there’s considerable advantage in being the tortoise.