Another Favre-ian Escape for FSU and Jameis Winston, College Football’s Most Volatile but Valuable Player 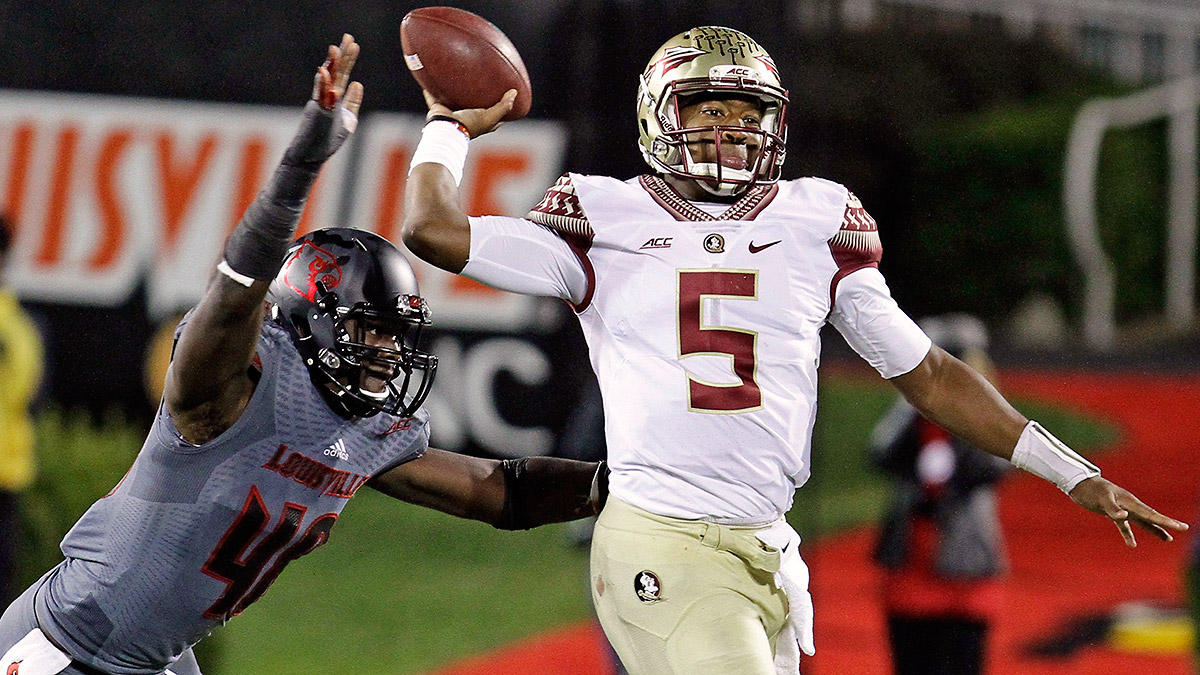 No play encapsulates Jameis Winston’s season, or his team’s, more fully than the interception he served up Thursday night against Louisville on the first play of the second half, which he subsequently managed to turn into a Florida State first down. On the front end, the reigning Heisman winner uncorked a howler of a pick, his third of the night, directly into the hands of Louisville safety Gerod Holliman, who had already recorded an interception in the second quarter to set up a Cardinals touchdown. On the back end, though, Winston caught up to Holliman as the defender attempted to juke his way to a few extra yards on the return, punching the ball free; FSU pounced on the fumble for a de facto gain of 16 yards and resumed possession with a fresh set of downs.

That was the night in a nutshell. As ever, Winston was both the cause of and the solution to virtually all the no. 2 Seminoles’ problems in their 42-31 win over no. 25 Louisville.

Besides serving as a heavy-handed metaphor, the reciprocal giveaways were also a turning point. In the first half, Winston had completed just 10 of 22 passes with two interceptions and no touchdowns, yielding a dismal 74.2 efficiency rating;1 meanwhile, Florida State had been shut out for 29 minutes and 27 seconds, its longest scoring drought of the past two seasons, before punching in a touchdown just before halftime to trail 21-7. In the second half — following the would-be turnover out of the chute — Winston completed 15 of 25 passes for 278 yards and a sky-high efficiency rating of 193.0; FSU hit paydirt on five of its last seven full possessions, with three of those scores coming courtesy of Winston’s right arm as he hobbled around on a visibly injured ankle.2 “Pain is temporary,” he said after the game, and his team’s 24-game winning streak is living proof.

As we’ve discussed before, for an outfit with Florida State’s unsullied record and unchecked ambition, this team has been notable mainly for being so frequently painful to watch. Earlier this week, Grantland contributor Ed Feng noted on his website that none of the leading polls driven by advanced statistics considered FSU a top-10 team based on its 7-0 start, with Jeff Sagarin’s “Predictor” rating — a method geared specifically toward gauging the outcomes of future games — relegating the Noles all the way down to no. 20. Football Outsiders, which ranks teams according to a system called F/+, listed Florida State at no. 11. In Vegas, the point spread against Louisville dropped from seven points in FSU’s favor at the beginning of the week to just 3.5 points by kickoff. And it’s hard to imagine that the skeptics saw anything new between the kick and the final gun that stands to bolster the Seminoles’ stock.

Thursday night’s rally marked Florida State’s fourth come-from-behind win this season in a game it trailed in the fourth quarter, and the second victory in a game it trailed at some point by at least 17 points.3 Louisville, which entered ranked 111th in total offense, racked up 488 yards, a season high by far for the Cardinals against an FBS opponent; Florida State came in ranked 51st in total defense, has already fallen to 58th, and could drop further once everyone else plays on Saturday. Relative to last year, and to initial expectations for this year, the Noles have yet to play a complete game, and they look increasingly incapable of doing so.

As often as FSU has found itself on the mat, though, it keeps proving damn near impossible to keep there. In that sense, Winston is the ideal candidate for the role of Atlas: How many quarterbacks have ever looked so combustible and so utterly indestructible at the same time? As simultaneously volatile and valuable? It’s a Favre-ian balance, for sure. Including January’s BCS National Championship win over Auburn, Florida State has trailed at halftime in four games in 2014 with Winston in the lineup, often with Winston playing a leading part in the debacle: He was responsible for three turnovers in the first half against NC State, two against Louisville, and a ghastly one against Notre Dame that set up an Irish touchdown. But in the second halves of those four games, FSU has gone on to outscore the underdogs 115 to 47, an average margin of 17 points. You look up, and in a matter of minutes an impending flameout has been supplanted by another inevitable triumph.

If we saw anything new from Florida State on Thursday night, it was the emergence of true freshman tailback Dalvin Cook, who broke second-half touchdown runs of 40 yards and 38 yards and looked like the home run threat FSU’s backfield has been missing; in fact, the Seminoles’ first four touchdowns after halftime were all scored by true freshmen, with wide receivers Travis Rudolph and Ermon Lane joining Cook at the party. Some of the hyped young talent in the latest recruiting class is beginning to round into form for the stretch run. We knew already that the secondary was vulnerable to big plays, that the banged-up offensive line was prone to breakdowns against the blitz, and that Winston sometimes tries to force throws that aren’t there. We also knew that none of those deficiencies had been enough to keep Winston’s talent bottled up for long, and they weren’t enough on Thursday night, either. With this team, the more things look like they’re on the verge of collapse, the more they stay the same.

Why Did LeBron and the Cavs Get Benched by the Knicks?