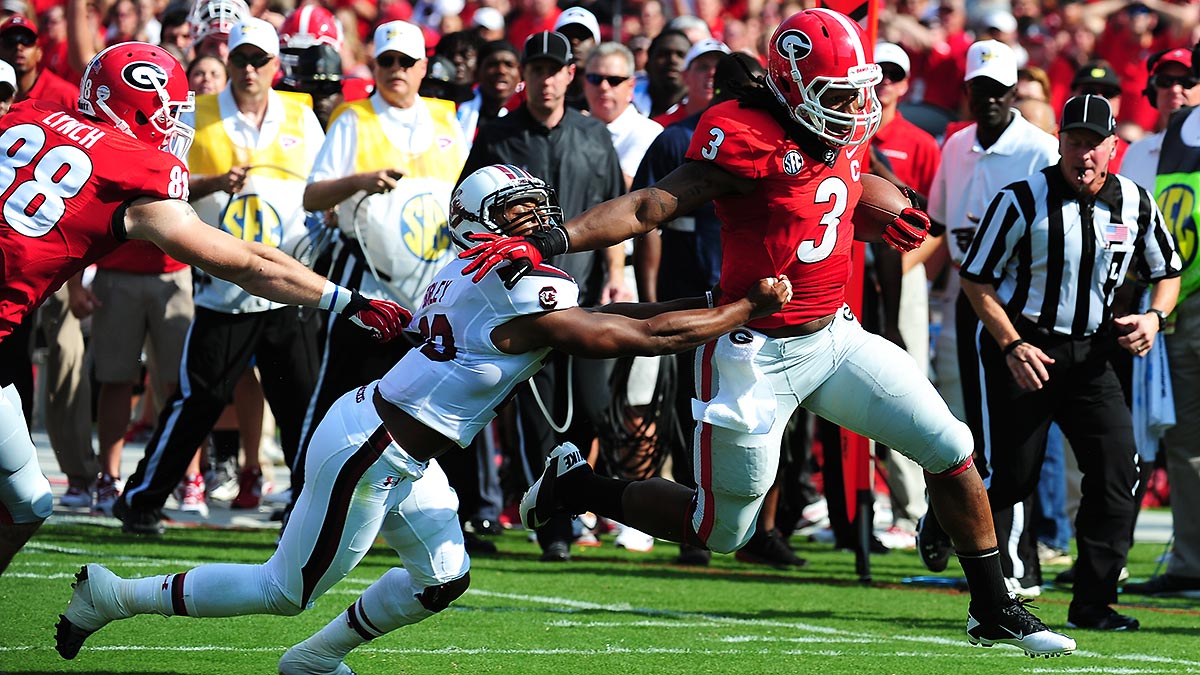 I don’t want to tease South Carolina fans desperate for some semblance of optimism after watching their team get torched by Texas A&M in the SEC opener, so I’ll be clear up front: No, Georgia running back Todd Gurley almost certainly cannot be stopped. Not by a college defense, anyway, and certainly not by the one America saw give up 680 yards of total offense its first time out.

Under Steve Spurrier, the Gamecocks have grown accustomed to fielding killer Ess-Eee-See defenses on an annual basis, and they’ve fared particularly well against Georgia; in their last two trips to Columbia, in 2012 and 2010, the Bulldogs combined for just 13 points in a pair of double-digit defeats.1 But the defense South Carolina fielded against A&M was in no position to stop anyone, and it didn’t exactly stuff East Carolina’s offense into a burlap sack in last week’s 33-23 win over the Pirates, either. When the point spread for this weekend’s South Carolina–Georgia match was initially posted in July, Vegas liked Carolina as a 4.5-point favorite; it looks like by kickoff on Saturday, the line will have moved in Georgia’s direction by 11 points.

Regardless of the defense he’s facing, though, Gurley presents a unique problem. In 23 career games against FBS opponents, Gurley has averaged 106 yards rushing and nearly 40 more as a receiver and return man. He’s also accounted for 36 total touchdowns in those contests. Against the best defense he faced in that span, Alabama, Gurley ran for 122 yards and two touchdowns as a true freshman in the 2012 SEC championship game. Against Florida’s blue-chip defense, he accounted for 141 yards from scrimmage in 2012 and 187 yards in 2013, largely carrying the offense in back-to-back UGA wins. In last year’s game against South Carolina, he logged a career-high 30 carries for 132 yards and scored touchdowns as both a rusher and receiver in a 41-30 win in Athens. (That was also the game in which he memorably charged into the Carolina secondary without a helmet.) In Georgia’s only game to date in 2014, Gurley accounted for 293 all-purpose yards in a 45-21 victory over Clemson, and looked like some kind of svelte tidewater Hercules in the process.

In those 23 games, only three opponents have managed to hold Gurley below 100 all-purpose yards, and the last one to pull it off (LSU in 2013) joined the list only because Gurley suffered an ankle injury in the second quarter; to that point, he’d gashed the Tigers for 86 yards on just nine touches. Kentucky held Gurley to 70 total yards in 2012, which was impressive, but not a total shutdown. In two seasons and change, we have exactly one example of an opponent keeping a healthy Gurley “in check,” or even close to it. That opponent happened to be South Carolina, also in 2012, but as I’ll illustrate in a bit, that game came with an asterisk.

If the Gamecocks hope to pull off the seemingly impossible this weekend, here are their best chances for survival against the most unstoppable player in college football — and of salvaging their conference championship and playoff prospects in the process.

Gurley’s best play — the one that likely flashed immediately into your mind when you read his name in the headline — is a timeless, Lombardi-esque power sweep featuring an honest-to-god fullback, an H-back, and a couple of gasping linemen leading Gurley into the flat.

For the defense, of course, this is an east-west play: The linemen and linebackers have to flow laterally in pursuit of the ball. If it’s well executed on Georgia’s end, though, Gurley’s path should be essentially a straight line up the field — the angle is closer to northeast-southeast than to north-south, perhaps, but either way he’s arriving at the crease as quickly as possible, and at maximum velocity. And while it was the acceleration at the point of attack that leapt off the screen during Gurley’s backbreaking, 51-yard touchdown run against Clemson, it was impeccable blocking that gave him an uninterrupted, straight-line head of steam on his way there, allowing him to hit the seam at full speed with his shoulders (and momentum) aimed upfield at all times.

On a couple of occasions in last year’s win over South Carolina, the downhill emphasis on the sweep was even more apparent. But the Gamecocks also defended the toss perfectly at times, most notably on this first-and-10 run in the second quarter:

Although he didn’t make the tackle, this play was really made by Carolina’s outside linebacker, who — unlike Clemson defenders in our first example — successfully attacked the block of the tight end on the edge and drove him backward into Gurley’s path. In fact, the OLB dominated the point of attack so thoroughly that he occupied both the tight end and the fullback, effectively eliminating the lead blocker and forcing Gurley to slow down and bounce to the sideline rather than make a decisive cut upfield.

While this is all very basic — proper pursuit angles, taking on blocks, etc. — it’s still much easier said than done. This is how it’s done, though. Gurley is alarmingly fast in the open field, but he’s not a shifty, stop-and-go type in tight quarters when faced with penetration at the line of scrimmage. The more often we see him in the pose he’s occupying in the third frame above, with his shoulders and momentum pointed toward the sideline rather than the end zone, the less damage he’ll be able to inflict.

2. Limit His Role As a Receiver

Because of his workhorse size (6-foot-1, 226 pounds), Gurley is not generally regarded as a receiving threat out of the backfield, but the numbers prove otherwise: Over the last six games of 2013 alone, he hauled in 32 receptions for 399 yards and five touchdowns. And that’s not including this ad-libbed beauty against South Carolina from earlier in the season.

Gurley is not merely a safety net in the flat when nothing’s available downfield: Last year, he caught nine passes covering at least 15 yards, and four that went for at least 25 yards, most memorably a wide-open, 72-yard jailbreak against Florida after Georgia caught the Gators in a six-man blitz. His presence in the passing game is even more critical considering (1) the Bulldogs’ starting quarterback, Hutson Mason, turned in an extremely conservative performance against Clemson (more on that below), and (2) starting receivers Malcolm Mitchell and Justin Scott-Wesley are both doubtful for the second consecutive game, with lingering knee injuries.

This is the only aspect of defending Gurley that Clemson got right: Gurley had one, lonely reception in the opener, a doomed screen pass that was immediately sniffed out and crushed for a five-yard loss to end Georgia’s opening possession.

Not coincidentally, that was a third-and-long, must-pass situation, and the Tigers knew exactly what was coming their way.

3. To Hell With It; Make the Quarterback Beat You

The thwarted screen is a good example of how little respect Clemson had for Mason’s ability to hurt it downfield, which remains easily the most pressing question for Georgia coming out of an otherwise dominant debut. Remember: Entering the fourth quarter, the Bulldogs led by only three points, 24-21, and they ran roughshod in the final frame without attempting a pass. Through the first three quarters, Mason put the ball in the air 26 times, but averaged just five yards on those attempts with a long of 23 yards. Only seven of 18 completions went for first downs, and none for a touchdown.

South Carolina’s secondary is licking its wounds, having yielded more passing yards to date than any FBS defense except Bowling Green’s. But Mason is not Kenny “Trill” Hill, or even East Carolina’s Shane Carden, a likely 2015 draft pick; he’s a first-year starter with an unproven arm and a shorthanded receiving corps. If that’s not a recipe for loading the box with eight and occasionally nine guys, I don’t know what is.

4. Get Off to a Fast Start on Offense

The old adage “The best defense is a good offense” is a stupid saying, because the best defense is pretty clearly, y’know, a great defense. But no defense has really stopped Todd Gurley in his college career, even the ostensibly great ones. And the only defense that can make a remotely plausible case to have stopped him on paper, South Carolina in 2012, got an awful lot of help from its offense.

Georgia’s last trip to Columbia stands out as the worst stat line of Gurley’s career: 39 yards on 3.0 yards per carry and zero touches as a receiver or return man. Tellingly, though, it was also the most lopsided loss of his career, a 35-7 rout that could have been worse if the Gamecocks hadn’t taken their foot off the gas in the second half. Carolina scored three touchdowns in the first 10 minutes, before Gurley had even logged his third carry. A dozen plays in, Georgia had committed two turnovers (one interception, one fumble) and watched the Gamecocks take a punt to the house; from there, any pretense of a patient, balanced approach was out the window.

The fact is, if Gurley gets his touches, he’s going to get his yards, and Georgia’s almost certainly going to get its points as a result. The longer the score is within reach, the more comfortable the Bulldogs will be in their four-deep rotation at tailback, and the fresher Gurley will be when it comes time to drop the hammer down the stretch. The most foolproof way for Carolina to prevent that from happening is to threaten to put the score out of reach, even if that means taking some early risks. When it comes down to it, if you can’t stop the guy, just don’t give him the damn ball.