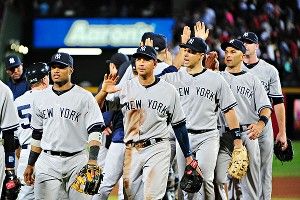 In baseball, as in life, we want to believe that things happen for a reason. For some, accepting that certain events can hinge on nothing more than happenstance is to go through life wondering if an anvil might drop on your head. Or at least on your favorite player’s head.

The truth is, randomness is all around us, especially in baseball. Over the course of a year, much of that randomness tends to even out, for players and especially for teams. But in the course of a single game, random chance can and often does decide the outcome. Once in a great while, a moment of luck can decide an entire season, the way two incredibly unlucky bad hops swung the 1924 World Series. Far more often, we get games like Monday night’s Yankees-Braves tilt, which the Yankees won 3-0 thanks to early offense, spurts of effective pitching … and Ivan Nova being a lucky SOB.

After a 42-inning audition in 2010, Nova’s official rookie season in 2011 was a year-long testament to good fortune. The Dominican right-hander posted one of the worst strikeout rates for any starter last season at 5.3 per nine innings. He wasn’t particularly stingy with walks, surrendering 3.1 free passes per nine frames. But he also pitched for the Yankees, which has its benefits. The Bombers scored an incredible 8.8 runs per game for Nova last year, second behind only Derek Holland’s 9.2 runs of support per game. That’s how Nova went 16-4 on the season despite lousy peripheral stats, and that’s how he finished fourth in AL Rookie of the Year balloting.

Through his first 11 starts of 2012, Nova had been, in many ways, lucky again. Once again the run support was there, with New York putting up 7.4 runs a when Nova pitched, marking the 25th-best run support for any starter this year. The Yankees’ bullpen, typically a solid crew, had been virtually unhittable behind Nova, posting a 0.64 ERA in games he started. The Yankees’ defense had committed exactly zero errors during Nova starts. Those factors helped explain how Nova jumped out to a 7-2 record in 2012, and he’d extended his road winning streak to 10 games.

But elements of bad luck also dotted Nova’s stat line. He ranked a solid 18th in the AL with eight strikeouts per nine innings, with a 3-to-1 strikeout-to-walk rate that placed 17th in the league. He’d made a notable change in his approach, throwing first-pitch curveballs a very high 28 percent of the time, and generally trying to mix up his repertoire and stay one step ahead of hitters. When the other team made contact, though, bad things happened, bad enough to make you wonder if it wasn’t all Nova’s fault. He’d given up homers on 17.3 percent of his fly balls allowed, the sixth-highest figure for any starting pitcher. Some of that could be blamed on Yankee Stadium’s comically reachable right-field short porch, which unless Nova doubles as a world-famous architect without our knowledge, doesn’t count as his doing.

Then there was his batting average on balls in play. Though early sabermetric orthodoxy held that pitchers had little to no control over balls in play, we now know that’s a bit overblown. Advances in PITCHf/x and other ball-tracking systems tell us exactly where every pitcher threw every pitch, how hard he threw it, from what arm angle, and about 900 other variables too. If you keep throwing meatballs, you’re probably going to fare considerably worse than average in BABIP and other stats governed partially (but not entirely) by luck. While kooky things can happen in 11 starts that you might not get over 35 starts, Nova’s .341 BABIP still rated as extraordinarily high, 6th-highest in the majors, in fact. Turns out there was a good reason for that which went beyond random chance. That same Yankees defense which never committed errors also did a terrible job of getting to balls: The Yankees placed 27th in MLB in Ultimate Zone Rating, 24th in Park-Adjusted Defensive Efficiency, and 25th in Defensive Runs Saved, three advanced metrics which measure a team’s ability to turn balls in play into outs. Yankees Stadium and the Yankees’ defense were hurting Nova’s ERA, which stood at 5.09 heading into Monday night’s start, despite 3.89 xFIP.

Nova didn’t get great run support against the Braves this time, as the Yanks scored three runs, all in the first three innings. He also missed badly on location again and again, only to get bailed out by Atlanta’s failure to do anything with fat pitches, and by his teammates’ suddenly amazing defense. To wit:

First inning: Michael Bourn leads off with a single. Martin Prado then gets an 0-1 belt-high fastball … but pounds it into the ground, leading to a 6-4-3 double play. Brian McCann then gets a fastball in the same area, thigh-to-belt high and out over the plate, which he drives all the way to the 400 sign in straightaway center … only to have Curtis Granderson make the catch at the wall.

Third inning: In a span of three pitches, Jason Heyward reminds us why we expect so much out of him and also why he’s so frustrating, swinging in vain at a pitch that bounces in front of the plate, then lacing a solid single to center on a low-and-outside fastball that his huge reach allowed him to hit. Andrelton Simmons then rips a line drive up the middle, causing Nova to instinctively stick his glove out … and for the ball to somehow fly right into it. Nova then fired to first, skipped the ball in the dirt, but got bailed out by a a Mark Teixeira scoop for the double play

Fourth inning: In the interest of fairness, let’s note that Martin Prado’s infield hit to start the bottom of the fourth gives the Braves two hits on weak tappers that fail to make it out of the infield. Still, what follows is far more noteworthy — shocking really, if you watch Yankees games on a regular basis. Nick Swisher, whose defensive misadventures have prompted plenty of calls to trade him in the past, tracks a Brian McCann shot to right … to the track … to the wall … a leap … and a home run-saving catch! Do that play over 100 times and you get the sense that Swisher might not catch any of them; in Yankee Stadium, that ball in long gone. But not here, not on this night. Two batters later, Nova falls behind Freddie Freeman 2-0, one of many times Nova works himself into scary counts in the game. Freeman gets a 2-0 pitch he can handle, and appears to have an RBI single after whacking a shot headed up the middle. Nope. Robinson Cano ranges to his right, slides, handles a really tough hop, and throws Freeman out to save yet another run.

Seventh inning: Dan Uggla walks to start the inning, marking the fifth time in seven frames that the Braves put the leadoff man on. Freeman becomes the fourth batter out of the past five to work a 3-2 count, as Nova’s command wanes. But Freeman can’t lay off a 3-2 pitch high and well out of the zone, and strikes out, short-circuiting another potential rally. Joe Girardi uses the unlikely four-pitcher combination of Eppley, Rapada, Wade, and Logan to record the game’s final six outs, and the Yankees have their shutout.

For the night, Nova throws those seven innings, allowing just five hits, one walk, and no runs while striking out six. That gives him 15 innings pitched, nine hits, one run, two walks, no homers, and 11 strikeouts in his past two starts. His willingness and ability to throw strikes on breaking pitches early in the count, to pitch backwards, and to keep hitters guessing have certainly helped him improve this year, his big bump in strikeouts confirmation of that success.

But on any given night, the numbers can lie, or at least stretch the truth. Ivan Nova pitched well enough Monday night to at least give himself a chance to win without the benefit of good fortune. Factors beyond his control helped make that win a reality.