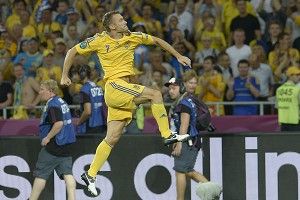 Andriy Shevchenko has been called many things, from “Europe’s deadliest finisher” to a waste of £30.8 million on the part of Chelsea owner Roman Abramovich. But after his performance Monday in Ukraine’s comeback victory against Sweden, he’s going to be known as the guy that made a kid do this:


And that’s pretty much the best an athlete can hope for. Shevchenko — a one-man goal factory at AC Milan and a broken toy in Abramovich’s chest at Chelsea — scored both goals for Ukraine on Monday, wiping out Sweden’s early lead and electrifying what had been a pretty cautious and emotionally flat tournament.

At his best, in 2005 and 2006, Shevchenko’s game was based on pace, his ability to get behind defenders. Well, if his body is going, the striker still knows how to use his head, and on Monday he scored two perfectly placed headers against the Swedes, sending Ukraine top of their group after one match.

His first, the equalizer after an earlier Zlatan Ibrahimovic goal, was the product of a wonderful cross from Andriy Yarmolenko, while his second, the winner, came in the 62nd minute off a corner kick.

The scenes in Kiev’s Olympic Stadium were pretty tremendous. Ukraine has taken a lot of hits in the lead-up to this tournament, with worries that homegrown fans would racially abuse visiting players.

That kid, the one in the clip, sappy as it seems, is the other side of things; the hopeful side. The one that just wants to see his national heroes play their hearts out and maybe get a result. On Monday, that’s what happened. I’m pretty sure we’re going to remember Shevchenko for his performance against Sweden from here on out.