Game of the Night: Pirates vs. Phillies 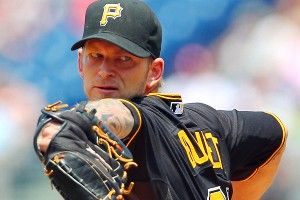 As we near the halfway point of the baseball season, only someone with Grays Sports Almanac in their back pocket could have foreseen what’s happened to Pennsylvania’s two major league teams: The Phillies’ half-decade run of dominance is on the verge of collapse, while the Pirates are in the thick of a playoff hunt.

We’ll take a closer look at the Phillies, what went wrong, and what they might do as the trade deadline approaches. For now, your 2012 Pittsburgh Pirates, in Five Easy Pieces:

5. The following is a list of streaks by Pirates players this season:

If you’ve followed the Pirates or play in enough fantasy leagues, you know this list is a ploy: Pedro Alvarez is responsible for all those streaks. Alvarez blasted his 14th homer of the year Thursday, a lined shot in the first that left the park in about 0.0001 seconds. Only Miguel Cabrera has hit more homers among major league third basemen, and Alvarez tops them all with a .242 isolated slugging mark. Unfortunately, he’s also hitting just .225 with a .292 on-base percentage. Alvarez is such a polarizing player that during one of his home run binges, I predicted he’d hit 35 homers this year, and ESPN fantasy fiend Nate Ravitz said he’d be in the minors by July 1. For a while, it actually looked possible that we might both be right. Pedro Alvarez will put you in an early grave.

4. The Pirates haven’t been all that good at … almost anything, really.

Despite dominant seasons for two of their starters, the Pirates’ rank a modest 14th in FIP among starting rotations.

Their relievers do rank third in ERA … but just 21st in FIP.

Their fielders rank a decent but unspectacular 12th in Ultimate Zone Rating.

All of which looks great compared to their hitting, which is dead last in the majors with a .288 wOBA.

They’ve scored the second-fewest runs of any team in the majors and rank just ninth in NL run differential at -6. Yet they’re second in the NL Central, just a game and a half behind front-running Cincinnati. So what gives?

3. So how are they doing this?

One of their biggest edges has been superior pitching in big spots. Only the Rays and Orioles pitchers have been stingier in high-leverage situations than the Pirates’ staff. There’s some skill involved here, certainly: If Clint Hurdle’s doing a better job getting his best arms into the most important situations, that helps. Or maybe Pirates pitchers collectively pitch better from the stretch than their counterparts. Still, the disconnect between the Pirates’ typical results and those with the game on the line is so great that you have to wonder if they might be benefiting from a lot of good luck. The Bucs are 18-13 in one-run games (among NL teams, only the Giants and Braves have been better), and a perfect 3-0 in extra innings.

The Phillies’ numbers with runners in scoring position on Thursday? Zero for 10. In related news, the Pirates won 5-4 — another one-run victory.

Two young stars, Andrew McCutchen and James McDonald, are enjoying breakout seasons. Even after an ugly 0-for-5 Thursday that included a lazy flyout on a fat 2-0 pitch in the first and a strikeout on a nasty 2-2 cutter in the second, McCutchen’s still posting the best numbers of his career: .336/.391/.576, good for a sky-high .409 wOBA. He’s hitting for more power than ever before (.240 ISO, on pace for a career-high 30 homers) and is on pace to challenge his career-best 33 steals, too. There are questions about sustainability, though: McCutchen owns a .385 batting average on balls in play, and he’s also walking less often than ever before and striking out more often than ever before.

McDonald’s gains, on the other hand, look much more real. The 27-year-old right-hander started messing around a bit with a slider. This year, he’s unleashed the pitch, throwing it nearly one-fifth of the time and achieving strong results. McDonald’s sitting on career highs in ERA (2.44), FIP (2.96), xFIP (3.67), and even Wins Above Replacement (2.3), that last one no mean feat given it’s a counting stat and we’re not even halfway through the season yet. He owned the longest streak of starts with three earned runs or less allowed in a game, at 15; that streak was finally broken during McDonald’s last start on Wednesday, one that still yielded a not-terrible four earned runs in 5⅔ innings, and a win for the Pirates. Not bad for a two-month rental of then-36-year-old Octavio Dotel.

1. None of these things count as the biggest revelation of the year.

Maybe it’s moving from baseball’s toughest division to one of its easiest. Maybe New York did get in his head, as post-hoc guessing for struggling Yankees pitchers often tends to go. Or maybe it was some inevitable regression toward the mean for a talented pitcher with a good track record. Whatever the case, Burnett has thrived in Pittsburgh. He sports a 3.31 ERA and 3.63 FIP and 3.47 xFIP this year, walking fewer batters than he has in six years and giving up fewer home runs than he has in four. Granting that you can play this game with any pitcher, Burnett’s one bad start this year was unfathomably bad: Strip out his 12-run nightmare against the Cardinals in his second start of the season, and Burnett would own a microscopic 2.05 ERA.

After the Bucs whacked Kyle Kendrick for five in the first on Thursday (Casey McGehee and Pedro Alvarez back-to-back homers? In this weird Pirates season, sure, why not?), the Phillies trimmed that lead with two runs of their own in the second on backup catcher Eric Kratz’s second career homer.

But Burnett settled down from there, squelching potential rally after rally with the help of his trademark curve. In the third, he got ahead of Jimmy Rollins 0-2, then threw a bender that broke so hard, Rollins swung over it by about a foot; the pitch was especially back-breaking, given Burnett had struck out Rollins in the first on an 0-2 pitch, too, only that one was a shoulder-high fastball that Rollins also had no chance to reach. Then, after allowing a runner to reach third, Burnett got two strikes on Hunter Pence, and threw a wicked curve that made Pence flinch, then clipped the outside corner for called strike three. Per the indispensable PITCHf/x analysis site Brooks Baseball, Burnett fired 101 pitches against the Phillies, a full 35 of them of the knuckle curve variety. Though he suffered a couple of lapses on the day, his final line included 6⅔ solid innings of work, seven strikeouts, just two walks, and plenty of impressive highlights.

It’s tough to say where the Pirates’ season will go from there. Their weak underlying numbers, and the fact that their offense looks like a vast wasteland after McCutchen, don’t bode well for a prolonged run at a playoff spot. Then again, this is the NL Central we’re talking about, and baseball just added a second wild card to give decent-but-not-great teams like the Pirates a fighting chance. The Bucs have numerous possibilities for in-season upgrades if management’s willing to be aggressive with trades, and McCutchen and McDonald should continue to carry much of the load.

And then there’s A.J. Burnett, who offers another reminder that in baseball, one team’s trash is often another team’s treasure. Seems fitting, since he’s now a Pirate.