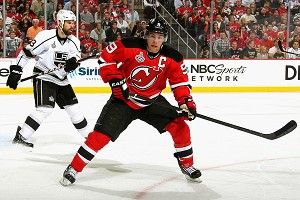 July 1 is New Year’s Day in the NHL, the date when the league calendar officially turns over into a new season. Every contract in the league rolls forward another year — or expires altogether. And that means free agency. Sweet, wonderful, blessed free agency (as it’s presumably referred to among player agents).

In advance of the big day, here are some of the things you need to know about what tradition obligates us to refer to as the NHL free-agent frenzy.

Free agency is a national holiday in Canada

No really, it is. Unlike the NHL trade deadline, for which everyone in Canada just fakes sick to get the day off, the first day of unrestricted free agency is an actual Canadian holiday. July 1 is Canada Day, which is essentially the same thing as Independence Day in the United States, except we don’t pass out after drinking four light beers.

In other words, when your favorite team signs somebody you’ve never heard of and you text your Canadian friend to find out whether or not you should be happy, expect delays. We’re busy lighting fireworks, grilling burgers, and standing in line with our kids for three hours so a preteen can clumsily paint a vaguely maple-leaf-shaped smudge on their cheeks.

There are a ton of unrestricted free agents this year

The new CBA (which is about to become the old CBA once the league gets done with the impending lockout, which will probably wipe out half of next season because owners will cry poor while Dennis Wideman laughs and rubs himself with dollar bills) didn’t just limit spending with a salary cap, it significantly lowered the age for unrestricted free agency. That means more players than ever before can hit the free market; this year, almost 20 percent of the entire league is available to the highest bidder.

That probably sounds a little bit overwhelming. But it’s not, because …

There are two franchise players available this year: forward Zach Parise, and defenseman Ryan Suter. That’s it. End of list.

There are some other big names, even a few that could reasonably be called stars. But everyone else can be described as either “unproven” (i.e., bad), “veteran” (i.e., old), “really unproven” (i.e., terrible), or “enigmatic” (i.e., Russian). Or in some cases, a combination of all of the above.

If you’re looking for a second tier to keep an eye on, start with these names: Shane Doan, Dustin Penner, Jaromir Jagr, Alexander Semin, Ray Whitney, and P.A. Parenteau. Oh, and one other guy …

Justin Schultz is a University of Wisconsin defenseman and Anaheim Ducks draft pick who exploited a loophole to become an unrestricted free agent before ever signing a contract. He’s considered a top prospect, so virtually every team in the league is making a pitch to sign him Sunday.

That means he’s doing what all free agents do — seriously considering offers from teams like Vancouver, New York, and Toronto, while also stringing along Edmonton to drive up the price. Unlike other free agents, Schultz can talk to teams before July 1 and will probably have made up his mind by the time you read this. He’ll wait until Sunday, sign a deal, and then go on to a legendary career (Vancouver, New York) or forget how to play hockey entirely (Toronto). And you’ll pretend that you had any idea who he was until a few days ago.

So yeah, not a ton of star power in the unrestricted ranks. If you want that, you’ll have to look elsewhere …

As always, there are really good restricted free agents that nobody will sign

But wait! Could we interest you in Norris Trophy finalist Shea Weber? Maybe a dynamic young forward like Edmonton’s Sam Gagner or Winnipeg’s Evander Kane? These guys are restricted free agents, meaning any team in the league could swoop in and sign them to an offer sheet, forcing their current teams to match the offer or let the player go for draft pick compensation.

Except that won’t happen, because nobody ever offer-sheets a star player. In one of the quirky little NHL coincidences, GMs refuse to make use of this simple provision in the CBA to try to improve their teams. Some would call this “collusion.” Others would call it “fear of having to fight Brian Burke in a rented barn.” Either way, there almost certainly won’t be any big-name RFA thefts this year.

Put it this way: Any team in the league could have signed Steven “60 goals on a terrible team” Stamkos to an offer sheet last year, and nobody even tried. So … don’t wait up, Evander.

The NHL has ultra-strict rules about tampering

The NHL has strict rules about tampering, so teams are absolutely forbidden to speak to or even about any free agents (other than their own) until noon EST on July 1. This isn’t like the NBA, where you get a window to negotiate before contracts can be officially signed. No contact between a team and players of any kind is allowed — if you want to so much as say “hello” to a pending free agent, you have to work out a trade with the team that owns his rights.

The rules are so strict that in 2009, the Maple Leafs were found guilty of tampering and fined simply because then-coach Ron Wilson told a radio station that yes, they might be interested in talking to the Sedin brothers when free agency opened the next day. The Canucks immediately complained and demanded that a penalty be assessed, because they’re Canucks and that’s all they know how to do.

No tampering. The NHL really means it, you guys!

Weird how that keeps happening. I guess these GMs and agents just work really fast.

Finally, and most importantly: Most of the free-agent contracts signed will be horrible

Maple Leafs GM Brian Burke likes to say that teams make their worst mistakes on trade deadline day. Maple Leafs fans like to hear him say this and then furiously jab their stubby fingers at the “July 1” square on a calendar before chugging a bottle of scotch and collapsing face first into a laptop playing the “All Heart” video on permanent loop. Because, man … NHL GMs are horrible at free agency.

In the years leading up to the last lockout, teams spent July 1 handing out contracts with increasingly ridiculous annual salaries to decreasingly worthwhile players. The salary cap was supposed to make that impossible, but it had the flaw of underestimating the determination of NHL GMs to make horrible decisions. The new trend is to give out deals that are mostly bad in terms of money and horrifically bad in terms of length.

Borderline fourth-line scrub? Here’s three years! Fifth defenseman? Have five! Star player? Have a decade or more! After all, most of the GMs doing the signings will have been fired long before everyone realizes how awful these deals really are. Let the new guy deal with it, am I right?

The bottom line: As frustrating as it is to watch your team sit around on July 1 and do nothing, it’s probably for the best. You show me a GM who can’t find his phone on Sunday and I’ll show you one who isn’t overpaying for an injury-prone third-line “character” guy. Colby Armstrong, I am looking in your direction.

And if your team is active Sunday? Get ready to pay close attention to the next CBA. You’ll want to get familiar with the new buyout rules, because you’re probably going to need them in a year or two.

Game of the Night: Pirates vs. Phillies