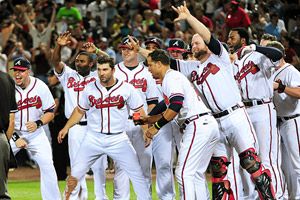 Pffft. Braves-Phillies beat ’em all. Here are the 10 most notable highlights from an absolutely crazy game.

10. The Phillies offense did something!
Coming into last night’s game, the Phils had scored just 80 runs in 24 games, an average of 3.3 runs per game. All eight starting position players cracked at least one hit, with Placido Polanco, Shane Victorino, and Carlos Ruiz collecting three each. Braves starter Cyborg Tommy Hanson was not pleased. This was a heart-wrenching loss for the Phillies in many ways, but seeing the Chase Utley- and Ryan Howard-less team bang out 17 hits, including four doubles and a homer, offers at least some minor solace.

9. Carlos Ruiz was the man.
Chooch went 3-for-5, scored two runs, and knocked in a career-high seven runs (which was also the franchise record for RBI by a catcher). His hits came in different flavors: a run-scoring double to deep center on a two-strike mistake of a high fastball; a three-run homer on a hanging slider to reclaim the lead in the seventh; and most impressively, an opposite-field, three-run, go-ahead double in the eighth on a fastball right on the outside black. In fact, it’s not quite right to say Carlos Ruiz was the man. On a team decimated by injuries, the lame-blooming, slow-footed, 33-year-old catcher is now hitting .329/.363/.575, the best mark among all Phillies regular by a sizable margin. Turns out, Carlos Ruiz is the man.

8. Even in an offensive onslaught, there was some defense played.
John Mayberry replaced Laynce Nix in left field in the bottom of the seventh. He made an impact right away, making a diving catch on a sinking Martin Prado liner that started a 1-2-3 inning for reliever Antonio Bastardo which helped preserve Philly’s one-run lead. Braves first baseman Freddie Freeman also made a sparkling stab in foul territory to start the sixth, starting a 1-2-3 inning that kept the game tied.

7. A normally airtight bullpen got ripped open.
Braves closer Craig Kimbrel was the top reliever in baseball last year per Fangraphs Wins Above Replacement; lights-out set-up man Eric O’Flaherty ranked 15th. Both blew saves in this game, O’Flaherty by serving up the aforementioned hanging slider to Ruiz, Kimbrel on a Shane Victorino infield hit with two outs in the bottom of the ninth.

6. Roy Halladay sent a nation of nerds running to their record books.
The man who ranks among the top handful of pitchers anywhere got smoked. In 5 1/3 innings, Halladay gave up 12 hits and eight runs, despite striking out a respectable five batters and walking none. Here are just a few of the streaks Halladay broke with this ugly performance.

• Halladay surrendered eight earned runs in a game for the first time in nearly five years.

• He’d gone 50 innings without allowing a home run, last serving one up to Lance Berkman on Sept. 19 of last year.

• He was yanked in the middle of an inning for just the second time in nearly four years.

• Halladay was an incredible 107-0 for his career in starts in which he was staked to a four-run lead.

5. You could call this a roller coaster game, but that wouldn’t be doing it justice.
The Phillies jumped out to an early 6-0 lead, leaving the Braves with just a 2.3 percent win probability in the fifth inning. By the sixth, the Braves had claimed an 8-6 lead and an 86.9 percent win probability. That number plunged to 2.7 after the Phillies rallied to surge ahead 12-8 in the eighth, then rebounded to 87.1 after the Braves scored five times off some terrible Phillies relief (more on that in a second), before Victorino’s ninth-inning single sent the game to extras. The inning-by-inning win expectancy chart for this game is completely bonkers.

4. Charlie Manuel enjoys flushing $50 million down the toilet.
How else to explain the Phillies’ manager inability to pull his star off-season acquisition out of dry dock while the Bala Cynwyd American Legion team threw gas cans on a heating Braves rally in the eighth? Is there any doubt that Manuel would have gone to Jonathan Papelbon at some point in the bottom of the eighth if he (like so many other managers) weren’t so obsessed with using their closers in traditional save situations, up one to three runs, bases empty, leading off the ninth? Instead, Manuel entrusted the game’s biggest inning to Jose Contreras and Michael Schwimer, and they blew it. You can’t always predict when the highest-leverage situation will occur. But when it does, having your top guy work on his origami skills while you send vastly inferior pitchers out to do the job is a great way to lose the game.

3. There was some cruddy umpiring at a crucial moment of the game …
… but we’re not going to get into it, because so many other things happened that swung the outcome, and because again, no one will ever top Tim Welke’s “if your foot’s in Wyoming and first base is in Colorado, we call that a neighborhood play” ruling.

2. Brian McCann grand slam was exciting and all …
… but Michael Bourn accidentally poking McCann in the eye as they celebrated the game-tying grand slam was some truly inspired derpery. On the most eventful night of this baseball season, when so many plays captured our imagination, let’s honor the guy who nearly pulled out his teammate’s retina trying to land a high-five.

1. Chipper’s walkoff homer
This was Jones’s first walkoff blast since May 17, 2006 against the Marlins. It was the eighth of his career. And there’s a real chance it might end up as the final walkoff of his career. If it is, let’s remember both the majesty of the blast, and Chipper’s curmudgeonly celebration, touching home gingerly amid the waiting mob, ducking, and emerging quickly from the scrum, taking great care not to damage his fragile knees that might only have five months of baseball life left in them. If you’re a Braves fan reveling in the future Hall of Famer winning yet another game for the home side as a possible playoff run builds, you’re hoping for six.