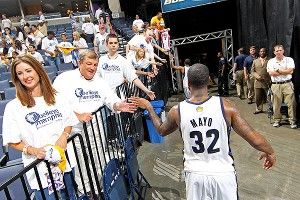 Hero of the Night: O.J. Mayo

As we saw with Dallas last postseason, there are instances where the playoffs come down to having a roster with just enough shot-makers. For the Mavs, it was guys like DeShawn Stevenson. Last night in Memphis, it was another guy who, according to the NCAA, never technically played college basketball.

O.J. Mayo was a pedestrian 6-for-16 from the field in Game 2, and his 2-for-7 performance from beyond the arc didn’t much help the Grizzlies, who shot just 17 percent from out there. The two he made though, came when Memphis needed them. The first was with 9:30 left to play and Memphis up four. Mayo followed a tough Mo Williams mid-range J with a ridiculous 28-footer from the wing right over Blake Griffin. The second was a transition 3 from the wing to push the Memphis lead back to nine with about 7:30 left. On the way back down the floor, Mayo put himself in the early lead for Best Finger Guns Celebration: Playoff Edition as he blew smoke from his three-fingered shooters before sliding them back into their holsters.

When the Clippers brought the ball back down the floor, it was Mayo who was tasked with guarding Chris Paul. With an energy that neither I nor Chris Webber can recall, Mayo stalked Paul along the top of the key before eventually getting the steal.

One of the main problems Memphis presents is that along with having one of the best perimeter defenders in basketball (Tony Allen), they also have a handful of long bodies that, when interested, are truly a pain in the ass. Mayo is among them, and if those spurts of intensity come with a knack for knocking down shots when they matter most, hell … maybe it’ll be Mayo who’s living the DeShawn Stevenson life come June.

In-Game Banter of the Night

Are these guys kidding us? I’d rather watch a Stan Brakhage movie backwards than endure anymore of the Spurs clinical murking of the Jazz, but if the NBA wants to mic this pair up for life, I’d be all ears.
— Chris Ryan

“They’re going back to the crib and you know how it is at the crib.”

This Kid is Our Co-Pilot

Oh, you like Z-Bo? NO, ACTUALLY THIS LITTLE DUDE LIKES Z-BO MORE THAN YOU DO.

Card-Pulling of the Night: Z-Bo on Blake Griffin

As the Clippers and Grizzlies head to Los Angeles, the most fascinating matchup in the series — by far — is the one between Zach Randolph and Blake Griffin. In almost every way, the two are opposites: Z-Bo playing firmly rooted to the floor, Blake playing above the rim. Randolph drawing power from a seemingly constant, running monologue during the game; Blake trying to influence proceedings with drawn out looks that are supposed to say a thousand words.

As Shaq says, you know how it is in the crib. So we can chalk up some of Randolph’s good mood to home cooking. But whether it’s in M-Town or L.A., Randolph has shown us two things (1) He’s starting to get his legs back — this shoulder drop, drive, bucket and one at the end of the game was his best piece of basketball of the night — and (2) He’s starting to get into Blake’s head. Just watch the linked video above and tell me Blake didn’t want anything to do with Randolph.

Even if the Clippers dunk dealer had a decent, efficient (9-for-15) night, he seemed blotted out by Randolph’s … basketball personality. How else could you explain Griffin’s thousand-yard Berenger stare when talking to Easter Suit Sager after the game? Blankly admitting the intense, physical nature of the series, he may have been going for stoic strength, but he came off a little shook. And guess what: This is just beginning. — Ryan