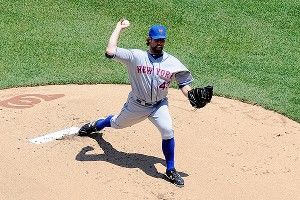 There is no shortage of reasons to marvel at R.A. Dickey. He’s a best-selling author whose book actually deserves that status. He climbs Mount Kilimanjaro for charity. He names his bats after Lord of the Rings swords and steps to the plate to the opening theme from Game of Thrones.

All of these little quirks would be a lot less notable if it weren’t for this: While every athlete is either long gone by his late 30s or, at best, winding down their careers, Dickey is actually getting better. At age 30, he was a glorified batting practice thrower with no idea where the ball was going. At age 37, he’s just now becoming one of the very best starting pitchers on the planet. Barring pharmaceutical help or an act of God, this is pretty much impossible.

Properly harnessing a knuckleball might be considered an act of God, or at least a minor miracle. Dickey was once a decent prospect set to sign a bonus for more than $800,000 until the Rangers discovered he had no ulnar collateral ligament in his right elbow, which is beyond freaky. Dickey’s stuff and command soon evaporated, and he very nearly washed out of baseball. The Washington Post‘s Dave Sheinin tells the story of Dickey’s maturation as both a pitcher and a human being, and his return from the brink. It’s a great read. But the piece that caught my eye was Jeff Bradley’s story in the Star-Ledger on Dickey’s different forms of knuckleballs. Dickey’s ability to expand his array of knuckleball offerings beyond what’s been done before has made his signature pitch even more infuriating, and impossible to hit, for the rest of the league. To truly understand his transition from punching bag to decent pitcher to the guy with a league-leading 9-1 record, 2.44 ERA, and 4-to-1 strikeout-to-walk rate, and a 2.98 xFIP that trails only Zack Greinke, Stephen Strasburg, Cliff Lee, and Gio Gonzalez for the title of best in baseball, the little details matter.

FanGraphs lists the average velocity of a Dickey knuckler at 76.6 mph. He threw it considerably harder against the Nationals in the Mets’ 3-1 win Thursday. Facing Ryan Zimmerman in the first, Dickey threw four knuckleballs, the hardest one coming in over 81 mph. The pitch Dickey used to strike out Zimmerman was not only faster than what any knuckleballer of recent vintage has thrown; it also showed nasty, boring action, churning in on Zimmerman’s hands and causing the All-Star third baseman to swing feebly through it.

Charlie Hough on Dickey: “I think throwing it hard keeps the ball from having drastic movements. His ball has very small, tight, quick movements, which enables him to hit the strike zone more than I could.”

Indeed, Dickey’s shown excellent control for the past two-plus seasons, posting walk rates just above two per nine innings in 2010 and 2011, and again this year. But something’s clicked lately, above and beyond anything Dickey had done before. Dickey’s career strikeout rate stands at 5.8 per nine innings. Yet he’s whiffed an incredible 38 batters over his past four starts, spanning 29⅓ innings … against just two walks. He’s struck out at least eight batters in each of those starts, after doing that just four times in all the other starts of his career. In his first four innings Thursday, Dickey punched out five different Nats swinging. He didn’t allow his first walk until the sixth, when Rick Ankiel drew the base on balls after coming in on a double-switch. There was a time when Ankiel was also a pitcher who made hitters nervous by making sure no one knew where his pitches were going. Maybe that’s why Ankiel’s the only one who seemed remotely able to work the count against Dickey.

“He’s proving that a knuckleball thrown properly is a number of pitches. You change speeds on it. It breaks differently, has different actions. It becomes a fastball, a slider, a curve, a change, all of those things, but it’s only got one name.”

The pitch that got Danny Espinosa to end the second was a knuckler that might as well have been a slower Mariano Rivera cutter: It was an 80 mph beast of a pitch that started middle-in and finished off the plate, tying up Espinosa and causing him to miss by a mile. The pitch that whiffed Steve Lombardozzi in the sixth started thigh-high, then darted below the knees late, ostensibly an 82 mph splitter. You can watch those pitches as part of Dickey’s highlight reel for the day. Not shown: An 0-1 pitch to Bryce Harper that started out looking like a hanging curve, made Harper’s eyes grow as big as dinner plates, then dove what seems like a foot at the last second, causing Harper to miss big. When Hough says Dickey’s pitches only go by one name, he’s only partially right: There is no name for the offering Dickey threw the 19-year-old phenom, nor any limit to the nightmares Dickey will cause if he keeps throwing that dancing son of Satan to major league hitters.

Though Dickey’s riser most impressed Mets backup catcher Mike Nickeas, it’s a pair of sinkers that got him out of his only big jam of the day. With runners on first and second and nobody out, he threw a knuckler low and outside to Mike Morse. Rather than try and take the ball the other way, Morse did what most power hitters would try to do in that spot: Pull the ball. The result was a sharp grounder into the hole on the left side, which shortstop Omar Quintanilla fielded nicely and fired to third for the force. When Ian Desmond rapped another sinking knuckler right to David Wright, the Mets got a 5-3 double play and Dickey had quashed the threat. Make it 23⅔ straight scoreless innings for Dickey, who might be one start away from breaking Jerry Koosman’s franchise record of 31⅔ scoreless.

Plenty of questions remain with this Mets team. Shortstop is still a mystery, with Ruben Tejada on the disabled list for more than a month and the Mets digging so deep into the depth chart with all their infielder injuries that (according to SNY’s Gary Cohen) they considered calling up Wilfredo Tovar, a 20-year-old Venezuelan shortstop … who’s currently playing at A-ball. Shortstop is just one of several problem positions for the worst defensive team in baseball so far this season. What do you do with Ike Davis, the power-hitting, young first baseman who looks lost in every at-bat this year and is hitting .161/.237/.278? And how do you fix the only bullpen in the majors with an ERA over 5.00?

Given the Mets’ preseason expectations (there were none), these were the types of problems you figured they could address slowly and patiently, with an eye toward the team’s long-term health. But even after dropping two out of three in D.C., the Mets sit just a game and a half out of first. Sure, their many flaws and -8 run differential point to a team playing over its head and figures to regress sometime soon. But the Mets have 32 wins — only the Dodgers and Giants have more in the NL. And with two wild cards, the National League in 2012 looks like a wasteland, with once-powerful teams like the Phillies struggling badly and a slew of pushovers (Brewers, Cubs, Astros, Rockies, Padres) available to fatten up contending teams’ records. Strip-mining the farm system for a quick fix wouldn’t make any sense. But if the Mets hold their ground in the next few weeks, grabbing a couple of lower-cost rentals could make this an interesting summer in Queens. For that, they can thank David Wright and Johan Santana … and R.A. Dickey, the guy just hitting his peak while nearly everyone else his age prepares for the end.