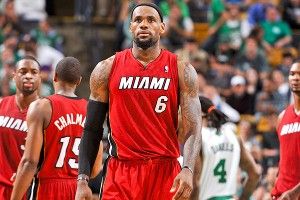 With a line of 45-15-5, LeBron James was downright transcendent on Thursday night, highlighted by a 30-point first half carrying the Heat through Game 6 and into a deciding Game 7 against the Celtics in Miami on Saturday night.

But was his performance truly clutch?

The process we have to go through to answer the question reveals just how flimsy the premise of clutch/unclutch is. Let’s start by considering this alternate scenario: Pretend, for a second, that the Heat had gone into Boston for Game 6 and lost by 15 points in a game where LeBron was mostly invisible. To throw a line out, he goes 6-of-15 from the field and finishes with 21 points and nine rebounds. It’s not a terrible performance, but it’s far from the sort of dominant show we would expect from the world’s most talented basketball player.

If that happened, the dominant story in the Friday news cycle would be about how LeBron failed to come through for his team again. How he struggled when his team needed him to play like a star. How he wasn’t a clutch player. And because that’s true, because we would judge LeBron to be a failure if he struggled in Game 6, you simply have to give him credit for putting on a clinic in the real Game 6. You can’t give LeBron no credit for a clutch win and all the blame for a clutch loss.

Sadly, of course, James’s dominant game will be remembered for all of 48 hours, since whatever meaning gets taken out of it with regard to the narrative of a clutch LeBron James will immediately be overwritten by what happens to James & Co. in Game 7. And even if LeBron plays well and hits a game-winning shot to finish off the Celtics, that enormous performance will be ignored if James fails to complete the Heat’s run with a big game or two against the Thunder.

It’s nothing new for LeBron. Remember his 37-and-14 performance against the Magic in Game 5 of the 2009 Eastern Conference finals? Or the buzzer-beater from Game 2? Or the 45-point outburst that nearly dragged the Cavs ahead of the Celtics in Game 7 during the 2008 playoffs? Or the 48-9-7 masterpiece in the double-overtime thriller against the Pistons in a pivotal Game 5 during Cleveland’s run to the Finals in 2007? You know, the one where he scored Cleveland’s final 25 points? This group included two potential elimination games, one that prevented the Cavaliers from going down 0-2 in a series, and one that gave the Cavaliers a critical 3-2 series edge. We spend hours before these games calling them must-wins and building them up to be critical measures of players and teams alike … and then we forget them in our narratives because they don’t jibe with our final memory.

That process — where we selectively remember the loss or poor play in the last game while ignoring all the other clutch triumphs that would have been criticized if they were losses — is why the scarlet “C” for “choker” is such a hard label to shake once a player has it fixed upon him. The narrative can reject success after success as long as it ends with one failure.

This comes up in other sports, naturally, and I first started thinking about it in terms of Peyton Manning’s run to the Super Bowl during the 2009 playoffs. After his Colts lost to the Saints, Manning took some flak for not coming up in the big games, with the same people who regarded him as a loser before his team actually won a Super Bowl somehow bending the rules to say that the league’s truly great quarterbacks won more than one title.

It was absurd for a number of reasons, most notably because of what Manning had done in the AFC championship game. There, Manning took on the best pass defense in the league (and maybe of the prior several seasons) and stomped all over it. He went up against Darrelle Revis and the Jets and came away with a ridiculous line, going 26-of-39 for 377 yards with three touchdowns and no picks. The average QB against the Jets that year went 16-of-31 for 154 yards with two interceptions for every touchdown.

It was one of the greatest performances you’ll ever see from a quarterback in the playoffs, but because it happened in the AFC championship game (a must-win game) as opposed to the Super Bowl (the last must-win game), it didn’t matter. Of course, had the Jets held Manning to 195 yards and two interceptions and squeaked out an upset victory, the entire Monday edition of the New York Post would have been dedicated to pieces on how Peyton Manning was a bum and Mark Sanchez was a clutch hero who won when he needed to.

The problem, as you can see by now, is that “clutch” can mean anything you want it to. What’s the issue with LeBron James? If his performance in Game 6 doesn’t count as a meaningful “clutch” showing, when does crunch time begin? Is it only when a series is in its final game? Or is it only during the Finals? And then, is it only meaningful in the fourth quarter? Or during the final two minutes? Or is it the final 15 seconds? To get the unclutch label to match up with the story you want to tell about LeBron James, you have to gerrymander the context into a ridiculous small sample and/or have an incredibly selective memory in supplementing that small sample with supporting cases.

Consider it from an alternate viewpoint. What’s more important in defining LeBron’s legacy as a clutch player: The dagger of a 3-pointer he hit with 37 seconds left that tied up Game 4 of this series at 89, or the decision he made to pass up the final shot in the All-Star Game? It should be obvious, but which do you remember more clearly? What about that 3-pointer versus Paul Pierce’s dagger from Game 5? James’s 3 was every bit as meaningful — probably more meaningful, considering that the Celtics already had a narrow lead when Pierce took his shot — but because what happened after each of those two shots went down, one is basically forgotten and the other is part of playoff lore. Does the big shot only count if LeBron’s team wins the game? The series? The championship?

Realistically, the legacy LeBron James leaves behind for this 2012 playoff run is yet to be determined. Five years from now, Game 6 will be a box score on Basketball-Reference.com, and we’ll either remember what James’s Heat did in Game 7 (in the case of a loss) or how they played in the NBA Finals (in the case of a win over the Celtics on Saturday). That’s simply unfair. If LeBron James had been an average player on Thursday night, the Heat wouldn’t be hosting that Game 7 this weekend. Instead, almost exclusively because James played like a man possessed in Game 6, the Heat will live to fight another day. If we don’t consider that performance to be clutch because it doesn’t stick in our memories, the problem isn’t LeBron James. The problem is us.