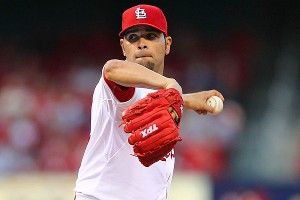 We use the term Game of the Night loosely in this case. Cliff Lee and Matt Cain gave us a hellacious pitcher’s duel in San Francisco, and Bartolo Colon threw 38 (!!!) strikes in a row in a monster start against the Angels. We’ll do our best to get you a taste of both those games later today. Here’s the one game we actually watched beginning to end.

Quick, name the 10 most underrated players in baseball. Is Jaime Garcia on your list? Because you can make a strong case he belongs there.

Let’s start with his backstory. Two years ago, the New York Times‘s Tyler Kepner recounted the story of how Garcia became a Cardinal. The Orioles picked the Mexico-born lefty, out of a Texas high school, in the 30th round of the 2004 draft. Back then, the O’s gave all their draftees a special test before signing them. But the test they gave to Garcia was translated into Spanish, very poorly at that. Garcia didn’t do well on the mutilated test, so Baltimore cut him loose. The Cardinals drafted him the next year in the 22nd round.

His draft status matched the velocity on his fastball — neither was impressive. Garcia profiled as your typical finesse lefty, someone who might find some success if everything broke right, but more likely wouldn’t amount to anything given his sub-90 radar gun readings. He did crack the big leagues, an impressive feat for any 22nd-round pick, let alone a 30th-rounder. But 10 games into his major league career, his elbow gave out. With Tommy John surgery ahead and little prospect fame to fall back on (Baseball America ranked him no. 70 among all prospects in 2007, but he was nobody’s vision of a future frontline starter), that might’ve been the end of the then-22-year-old pitcher’s big league career.

Nope. Garcia returned to the majors in 2010. And this time, he thrived, making 28 starts and impressing in every way, from the traditional (13-8, 2.70 ERA) to the analytical (3.41 FIP, 3.1 Wins Above Replacement). In 2011, he was even better by advanced metrics, slashing more than one walk per nine innings off his ledger, posting a 3.23 FIP and 3.6 WAR. Those kinds of results would place Garcia in the category of “good player” per FanGraphs’ WAR guide, on the cusp of All-Star ability.

But at the risk of losing my nerd card … Garcia is someone who needs to be watched to be fully appreciated. For starters, he throws six pitches: a four-seam fastball, a cutter, a curveball, slider, changeup, and two-seam fastball. He’ll throw each of these pitches in any count, going inside and outside, high and low, changing hitter’s eye levels and swing planes, and generally being a royal pain in the ass. Despite his high-80s velocity, Garcia actually rates just a tick above average at striking out hitters, nudging just above seven Ks per nine innings in his young career. But he’s clearly content to induce weak contact, dispensing of hitters on a couple of pitches rather than running up deep counts and getting bounced from games early.

The most enjoyable pitch to watch (assuming that, like me, you consider smart pitching to be pornographic in nature) is the two-seamer. If thrown correctly, it acts like an evil hybrid of a screwball and sinker, breaking down and away to opposite-handed hitters like an R.B.I. Baseball pitch from hell. Garcia throws it correctly. The result is a nightly romp through the torture chamber for right-handed batters unlucky enough to face him.

Last night wasn’t Garcia’s best by any means, with the two-seamer or otherwise: He went seven innings, allowing seven hits and three walks and striking out just three. He hung several pitches that Reds batters slapped into the ground, including this belt-high two-seamer that Chris Heisey hacked at on the first pitch, making weak contact and rolling into a double play. Call it a case of skill meets luck: Garcia threw just 89 pitches over those seven innings, 32 of them two-seamers. He got batters to swing early in the count, and induced four big double plays.

Though the Heisey twin killing did require some good fortune, a better example of Garcia’s oeuvre came an inning earlier. The Reds had cut the lead to 5-1, then put the first two men on base to start the sixth, bringing the 4-5-6 hitters to the plate, headed by noted antagonist Brandon Phillips. After a first-pitch changeup, Garcia went to the two-seamer. It didn’t quite have the vintage Fernando Valenzuela screwball action on it. But it broke down sharply, to Phillips’s shins. One feeble swing later, the Cardinals had two outs, short-circuiting the Reds’ last and best chance to come back in a game that ended as an 11-1 blowout win for St. Louis.

Befitting a pitcher with subtle and varied skills, Garcia wields a secret weapon that makes his game better: Dude can hit a little. He came into Wednesday night’s game hitting .140/.175/.174 for his career, a terrible line for a position player, but quite decent for a pitcher — good for 0.5 WAR over 136 career plate appearances, in fact. Since 2010, the first year Garcia became a full-time major league starter, he’s tied for 36 among 433 qualified pitchers in hitting WAR. Garcia can do more than put good swings on pitches, too. Facing Reds starter Mat Latos in the bottom of the sixth with two on and two out, Garcia started grinding. And grinding. He made Latos throw eight pitches without recording an out. Finally, on pitch number nine of the at-bat, Garcia broke out his boomstick. Induce four double plays in one game and hit a 395-foot triple, and you’ve done well, my friends.

A few other notes from the Cardinals’ one-sided win:

• Matt Carpenter did a terrific job for St. Louis filling in for the injured David Freese and Lance Berkman, going 9-for-22 with two doubles, two triples, and a homer in nine games. But with Freese and Berkman back healthy, Cardinals brass would’ve been happy for Carpenter to see only occasional fill-in work thereafter. Not so much, as it turns out. Berkman chased after a popup down the first-base line in the top of the fifth. Not only did he not come up with the ball, he also reaggravated his nagging left calf injury. Carpenter pinch-hit for Berkman in the bottom of the inning. With so many fragile players in key roles on the roster (Berkman, Freese, Carlos Beltran, and Rafael Furcal, as well as Adam Wainwright returning from Tommy John surgery and Chris Carpenter out indefinitely), the Cards are something of a boom-or-bust team this year. They lead all of baseball with 70 runs scored after tonight’s romp and hold the NL’s second-best record at 9-3. But those early returns could evaporate if the injuries start to mount.

Then again, Carpenter is just the latest in a long line of Cardinals fill-ins who’ve thrived in recent years … a few with impressive pedigrees, but many of them out-of-nowhere guys who’ve just kicked butt when given a chance. Jon Jay, Skip Schumaker, Allen Craig, Lance Lynn, Eduardo Sanchez, now Carpenter … no Bryce Harpers in the bunch, but some pretty damn good production nonetheless.

• Another of those fill-in types, Tyler Greene, cranked a pitch down the left-field line and out in the eighth for his first homer of the year. Greene was considered one of the favorites to win the second-base job with Schumaker starting the year on the DL. But he’s been relegated to a platoon role with utility infielder Daniel Descalso. When Schumaker and 2011 playoff hero Allen Craig come up, there’ll be a roster crunch, and even greater uncertainty over who mans the deuce. Having choices is a good thing, of course. But sorting out whether Greene’s bat could be playable every day, whether Craig can be competent enough defensively to handle second, or whether a nightly carousel would be necessary to handle the position remains one of the Cardinals’ biggest decisions this year.

• There wasn’t much to cheer about Wednesday night if you’re a Reds fan. Except this: Scott Rolen’s ninth-inning double off Kyle McClellan tied Andre Dawson for 51st all time in doubles at 503. That put Rolen three away from … Babe Ruth. There are many who would argue (perhaps rightfully so) that Rolen didn’t have a monster peak — that he was a top-seven NL player (by WAR) just once and top-13 in MVP voting just once. But Rolen’s career numbers do compare favorably to many current Hall of Famers: .281/.365/.493 at a position that doesn’t generate nearly as many hitting stars as third base’s reputation has led us to believe, with Gold Glove–caliber defense for nearly a decade and a half, adding up to 73.5 WAR (Jim Rice 56.1, Andre Dawson 62.3, Ozzie Smith 70.3). Rolen’s skill set — great D, tons of walks, and those copious doubles — doesn’t typically translate well to Hall of Fame votes. But at the very least, Rolen deserves more than the cursory hand-wave likely to come from certain cynical voters with round-numbers-or-GTFO attitudes toward Cooperstown candidates. Scott Rolen was one of the best players of his generation, and he deserves to be acknowledged as such.