Game 6 Revisited: “How Did This Happen?” 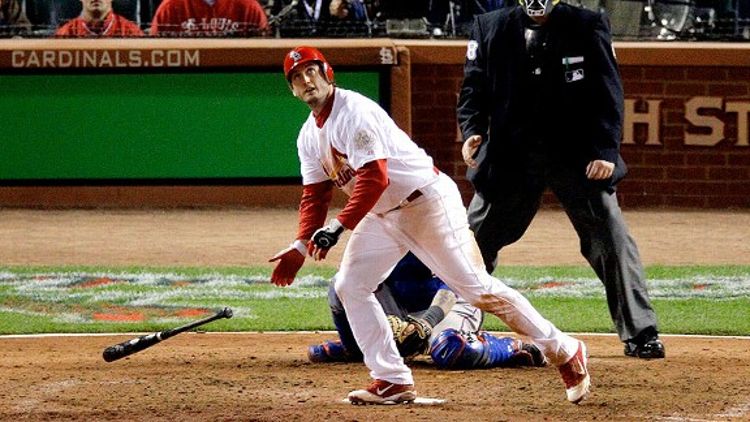 Imagine living your life with no clock.

No more dragging yourself out of bed when it’s still dark out. No more fighting through miles of traffic, everyone around you bound to the same schedule, stuffing muffins in their faces, spilling coffee on their laps, texting with one hand, driving with no hands. No risk of getting dumped or fired or scorned for being late. There are no deadlines. Only moments. Only possibilities.

You might go the rest of your life and never see a more perfect example of that existence than what happened last night. Only baseball could have made that happen.

For the record, the Cardinals’ 10-9, 11-inning win over the Rangers in Game 6 of the World Series took four hours and 33 minutes to play. But this game, like every other baseball game ever played, wasn’t bound by timed quarters, halves, or periods. Baseball games are marked only by outs. Never has getting those outs seemed more difficult.

After six innings, Game 6 looked poised to go down as one of the worst World Series battles of all-time. Hell, we even ran a data query for it. Mark Simon, the excellent researcher at ESPN Stats & Info, framed the question this way: “How many World Series games have featured a combined five errors, a pickoff at third base, and at least two wild pitches/passed balls combined?” Answer: none.

These were, admittedly, arbitrary parameters. Leaving aside the rarity of a third-base pickoff, there’s no perfect way to measure the worst World Series game in history, just as there’s no perfect way to measure the best one. But it certainly felt like something historic was going on. With all the miscues happening on the field, and all the preposterous decisions being made by the managers (mostly one manager), Game 6 was shaping up as quite possibly the most excruciating World Series game of our lifetime.

The carnage started in the fourth inning, with the score tied 2-2. Fernando Salas relieved Jaime Garcia, who looked nothing like the dominant pitcher he was in Game 2, and escaped with only two runs allowed thanks to some guile on his part and a whole lot of blown chances by Rangers hitters. Nelson Cruz, the first batter facing Salas, lofted a popup to shallow left. Rafael Furcal drifted back, onto the outfield grass, further and still further, well into Matt Holliday territory. The outfielder going forward must always call off the backpedaling infielder in that situation. Holliday did not. Replays would later show Holliday’s furtive cry to Furcal: “Take it!” Furcal could not, nor could Holliday, and disaster ensued. When Mike Napoli cashed Cruz with an RBI single to right, you couldn’t help but think the Rangers would win it all, and Napoli, with 10 World Series runs driven in and a long list of big moments, would be MVP.

Two batters later, more ugliness. Colby Lewis hit a tapper back to the mound. Salas wheeled and fired to second … air mailing everybody. Two on, one out, a chance for the Rangers to tack on more runs. Didn’t happen. Texas put 14 men on base through the first five innings, but scored only four runs. Those early failures kept St. Louis in the game, as did the Rangers’ own defensive breakdowns. Lance Berkman reached first to start the bottom of the fourth on an error by Michael Young, who booted the grounder wide of first, then made a poor throw to pull Lewis away from the bag. Holliday redeemed himself a bit with a walk and a takeout slide at second, forcing an errant throw by Andrus that helped set up the tying run. The Cardinals returned the favor, with David Freese bonking a routine popup by Josh Hamilton to start the fifth, and looking ridiculous doing it.

Then Ron Washington decided not to pinch-hit with a one-run lead, Salas on the ropes, the bases loaded, a deep, fully rested bullpen and several on-call starters standing by, and Colby Freaking Lewis the guy deemed irreplaceable.

Then, an inning later, Young made yet another error, this time doing nothing more than taking the ball out of his glove, only to drop it.

Then Washington decided he needed to go even further with Lewis.

Then Lewis, by now running on fumes, walked Freese to load the bases.

Then Washington looked down at the bullpen, considered an entire army of choices, and tapped the one guy who’d been a complete disaster throughout the World Series, Alexi Ogando.

Then Ogando walked in the tying run by very nearly hitting Yadier Molina in the face.

Then Holliday, failing spectacularly at bat and in the field throughout the World Series, completed the trifecta with brutal baserunning, getting picked off third by Napoli … with the bases loaded … on a throw from Napoli’s knees.

Had the game kept going in that vein and ended in some generic way, this would have been a stinker for the ages. If you hadn’t made a Tom Emanski joke by this point, you didn’t have a pulse. But that’s the thing about a sport with no clock. You don’t have a finite amount of time to take a lead or mount a comeback. Anything is possible, so long as you have outs still left to burn. From this moment on, finding outs was something neither team could manage.

Leading off the seventh, Adrian Beltre launched a shot over the wall in right-center to reclaim the lead for the Rangers. Then Cruz bashed a ball into the stratosphere to make it 6-4 Texas. As Lance Lynn stood dejectedly on the mound, Tony La Russa no doubt had the same thought that he did during BullpenPhoneGate: What the hell is he doing out there? Four batters later, Ian Kinsler knocked home Derek Holland with the Rangers’ seventh run, and the game seemed well in hand.

But there were tactical errors, more heroics by the unkillable Cardinals, and more amazing moments still to come. Holland led off the bottom of the eighth by retiring the fifth straight batter he’d faced. He’d more than done his job, especially after throwing 116 pitches in Game 4, and with a cavalcade of right-handed hitters now coming up. The Rangers had spent two good prospects to get Mike Adams at the trade deadline. He was their clear eighth-inning guy, so much so that Washington wouldn’t think to use him two innings earlier, when Lewis stayed in way too long and Ogando threw gas on the fire. Surely Adams was coming in now, right? Nope. First, Allen Craig blasted a homer to cut the lead to 7-5. Two batters later, Molina singled. Finally, only after La Russa sent punchless backup catcher Gerald Laird up as the potential tying run did Washington go to his setup man. The Cardinals followed with two straight singles, the first one a play that was a clear error by Andrus, which allowed pinch-hitter Daniel Descalso to reach. But Furcal, the only Cardinal rivaling Holliday for World Series futility, spoiled a bases-loaded rally by hitting the ball 40 feet. On the first pitch. Inning over.

When Texas went down quietly in the top of the ninth, the Cardinals were down to their final three outs of the season. But no matter what the Rangers tried from that point on, they couldn’t seize that last out.

In what was supposed to be the final at-bat of his Cardinals career (again), Pujols lashed a first-pitch double. Neftali Feliz, a fire-breather of a closer with a 100-mph fastball but also some scary command issues, walked Berkman on four pitches. Still, the Rangers seemed ready to celebrate. Feliz struck out Craig on an unexpected slider, then got two strikes on Freese. One more strike and the Rangers would have their first World Series in their 50-year franchise history. Feliz threw a fastball. Freese drilled it. Cruz, playing all the way back near the warning track, needed just a few steps to get to the wall. Somehow, he still missed the ball by a mile, the carom whizzing by him, and Freese buzzing into third with a triple. A two-run, game-tying, down-to-their-last-strike, outfield-can’t-possibly-allow-a-triple, triple.

From then on, you couldn’t breathe. We’d crossed the plane of reality to some screenwriter’s fantasy, a script so implausible that no one would ever greenlight it.

Josh Hamilton, he of the groin so wrecked that one jackass baseball writer told his manager he should be benched, walloped a two-run homer to give the Rangers a 9-7, 10th-inning lead.

Then Darren Oliver, a pitcher who’s been around so long he was once Nolan Ryan’s teammate, came in to face two Cardinals lefties … and both of them scratched out singles.

Then after a Lohse sacrifice, Scott Feldman came in, looking for his first career save.

Then after Feldman notched the second out of the inning, Washington ordered the fourth intentional walk of Pujols in two games.

Then, down to their final strike once more, Berkman lined a single to center to tie the game, saving the season yet again.

Then with two outs in the top of the 11th and a runner on first, Washington sent up light-hitting, seldom-used utilityman Esteban German to die a quick pinch-hit death against Jake Westbrook, yanking Feldman out of the game in the process and leaving the Rangers bullpen exposed.

Then Washington went to his worst, and least-used reliever, Mark Lowe, with the game on the line.

And then, in a final masterstroke of temporal chaos, David Freese, the kid who grew up a Cardinals fan on the edges of St. Louis, the unlikely hero who hoisted his teammates on his back to get to the World Series, the man of destiny who waited until one strike remained in his season before granting his team deliverance, hit a cannon to straightaway center that sailed over the wall and into baseball history.

As the Cardinals piled onto the field and their fans reached a state of delirium, Joe Buck delivered an homage to his father, aping Jack’s Game 6-ending call to the 1991 World Series, “We will see you tomorrow night.”

And we will. Cruz and Holliday are both questionable with injuries, Napoli’s hobbled after a badly turned ankle, the bullpens will get another full night, the Rangers will try to recover from the worst playoff loss since that other Game 6 a quarter-century ago, and Chris Carpenter will go for the win in a park where he’s been nearly perfect all year.

But the Game 7 prognostication could wait. As Freese’s teammates shredded his jersey at the bottom of a dog pile, the words of Buck’s broadcast partner Tim McCarver kept resonating. Amid a din that engulfed half the state of Missouri, he could only rightfully ask, “How did this happen?”

It happened because it’s baseball, a game where time stands still, and the impossible becomes possible.