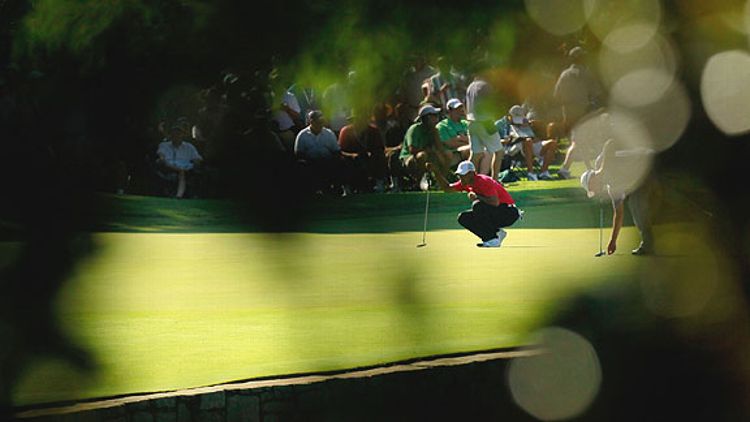 I’m in Johns Creek, Ga., on a sweltering Friday for the second round of the 93rd PGA Championship. This year, 98 of the top 100 players in the world are on hand to play the Atlanta Athletic Club’s revamped Highlands Course. Looming over everything, though, is the astonishing decline of Tiger Woods.

A day earlier, Tiger shot a 77, his worst opening round in a major. I’m here to follow his uphill climb to make the cut. (Even when a tournament is not about Tiger Woods, it’s about Tiger Woods.)

10:30 a.m.: Joining me for the next eight hours is my friend Justin, a scratch golfer and Tour fanatic. Justin is picking off nondescript golfers from 60 yards away, muttering things like, “Martin Laird, 22nd in the world.” Justin should probably be working for the Golf Channel, not tagging along with me.

Kevin Cott is a freelance writer and an attorney from Atlanta. Follow him on Twitter at @kmcott.

11 a.m.: With nearly three hours to kill until Tiger tees off, we settle on following the Tour’s gnarliest player for a few holes: 22-year-old phenom Rickie Fowler (bonus points for his work in this video). While standing at least 50 feet from Fowler, the two guys behind us whisper the following conversation:

11:15 a.m.: We hang back to watch Anthony Kim, Ernie Els, and Jhonattan Vegas for a couple of holes. Kim is sporting a visually disturbing mullet, flowing behind him like a horse’s mane. It’s probably time to start worrying about Anthony Kim.

11:25 a.m.: Our first golf spikes sighting in the gallery! Always exciting. Thank god this middle-aged white guy is here to substitute for Tiger in a pinch should a situation arise.

12:40 p.m.: After refueling on hot dogs and Yuengling, we head over to the practice tee to catch Tiger. Adam Scott and Steve Williams are warming up in the middle of the range. Steve is laughing too hard at everything, like a jilted lover who knows his ex is watching. Easy there, Stevie.

12:45 p.m.: Scott and Williams exit for the putting green just moments before Tiger arrives, denying everyone a chance to see Tiger and Williams cross paths. That seemed planned.

1:45 p.m.: As Tiger strides to the first tee, the crowd swells like a tidal wave down the first fairway. Tiger pushes his first drive right, though, and you can almost hear the air begin to seep out of the gallery. This is not the usual rock-concert experience.

1:50 p.m.: Tiger’s freefall has been compared to everyone from Rick Ankiel to David Duval, but I’m hoping the better analogy is Michael Jordan during his return to basketball in 1995. Jordan and Woods are the two most iconic athletes of the past half-century, each having taken leave from his respective sport in the middle of his prime. It’s easy to forget now just how human Jordan looked at times during the ’95 season; the lasting image was Nick Anderson, stripping the ball from Jordan. Anderson even noted after the game, “[That] didn’t look like the old Michael Jordan. Jordan responded by going Keyser Soze on the NBA over the next three seasons. Tiger can still do that.

1:55 p.m.: Tiger leaves his approach short in the left-side bunker, blasts his bunker shot 15 feet past the pin, and saves par with a winding downhill putt. That’s the putt the old Tiger always made.

2 p.m.: Walking along the left side of the second fairway, we nearly smack into Phil Mickelson. He’s deep in the woods on the third hole. He pulls out a long iron, squints through the trees, and nonchalantly knocks it through a six-foot window and onto the green. Phil gives the gallery his wide-eyed, “I’m a crazy man!” smile, waves, and ambles back towards the fairway. That was terrific. Like stumbling upon a kangaroo in its natural habitat.

2:15 p.m.: Tiger is playing alongside Davis Love III and Padraig Harrington, by the way. Harrington has the gait of a boxer, shifting side-to-side and bobbing his head like he’s approaching the center of the ring. He’s got the best walk on the Tour. Love, on the other hand, is comically stiff. He bounces with every step with his arms pinned at his sides. I wonder if anyone else is enjoying this.

3 p.m.: Tiger blasts an easy approach 15 yards past the pin, leading to an unforced bogey. He couldn’t control the distance on a full wedge with a perfect lie, no wind, and an easy pin placement. Strangely, this is actually encouraging. Tiger’s swing is still a study in controlled violence, and when he strikes the ball flush it still sounds differently than everyone else’s — he just genuinely looks like someone who spent three months rehabbing a knee injury.

3:30 p.m.: Tiger is 1-over through six holes and realistically needs to shoot 4-under over the final 12 holes to have a shot at playing the weekend. It’s not happening. He seems oddly withdrawn and has barely spoken a word to his caddie, childhood friend/employee/alleged sex liaison Bryon Bell. After Tiger’s tee shot on the seventh hole, some idiot shouts, “Abracadabra!” at the top of his lungs. Tiger doesn’t even flinch.

4:15 p.m.: Tiger birdies the eighth and ninth holes to finish the front nine even-par and bring the cut line within striking distance. He’s in good position on the 10th, but again can’t control his distance with an easy wedge and blows a crucial birdie opportunity. He’s not remotely there.

4:30 p.m.: Tiger pulls his drive way left on the 11th, leading to a double bogey. He doubles the 12th, as well, after knocking a bunker shot over the green and into the water. His tournament and season are over. The remaining six holes are awkward for everyone.

5:50 p.m.: Still trying to process seeing The Girl with the Tiger Tattoo.

6:20 p.m.: Standing behind Tiger on the 11th, we watch what might be his final competitive tee shot in the U.S. in 2011. Fittingly, he sprays it right. A guy with a camera in a safari hat next to us zooms in on the ball, grimaces like a doctor delivering bad news, and says to us in a thick accent, “Woods found the bunk-ah.” He quickly snaps a few shots of Tiger, packs up his gear and shuffles off. I look back about two seconds later and he’s nowhere to be found. I think I may have just seen God.

6:30 p.m.: Woods tries to reach the 18th green from the bunker, but anticlimactically plunks it in the water. I half expect Tiger to pull a Roy McAvoy and hold out his hand for another ball. Instead he trudges up to the hazard, takes his drop, and knocks it close for a bogey tap-in to finish at 10-over par. It’s the saddest round of golf I’ve ever seen.

Tiger seems even-keeled afterward. He emphasizes that he’s excited to be healthy again and ready to get back to work for next season. He isn’t exactly gregarious, but for someone who just hit career rock bottom, he isn’t nearly as prickly as one would expect.

Watching Tiger, I find myself thinking about Jordan’s brutally candid Hall of Fame speech. He effectively torched the entire room, at one point saying to his own family: “I wouldn’t want to be you.” Now that was a portrait of a man as an island.

It’s unclear if Tiger still has that maniacal tunnel vision after seeing his life turn upside-down. Maybe not. What is clear is that the Keegan Bradleys of the world are suddenly hoisting Wanamaker trophies, with Tiger watching helplessly from the ground. It’s a weird and unsettling turn of events.

Now we’ll see if he gets up.

Just Quinn, Brady: No Such Thing as a 'Pre' Season