Just Quinn, Brady: No Such Thing as a ‘Pre’ Season 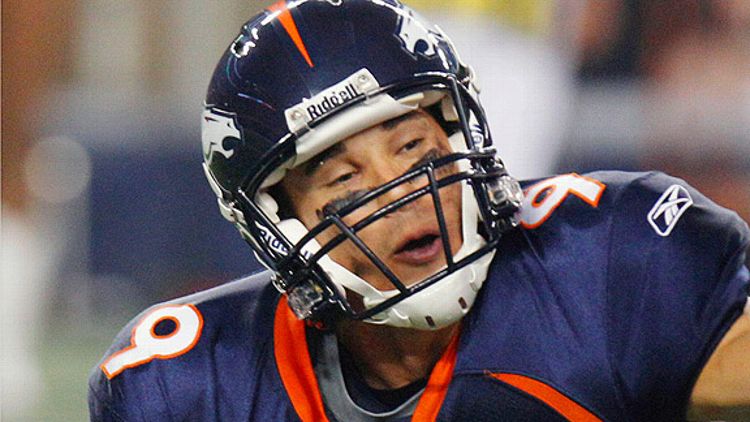 When we had the chance to have a weekly column written by Denver Broncos quarterback Brady Quinn, we jumped at the opportunity. So please enjoy: “Just Quinn, Brady,” the blog of Denver’s Best (Looking) Quarterback.

Sorry, one second, I have just have to finish my last set of scrunches.

Okay, hey. I’m back, and in case you were wondering, yes, scrunches are a hybrid of sit-ups and crunches invented by my neighbor/trainer to work out my top two abs.

Pretty pumped right now because after my Week 1 performance (no such thing as a “pre” season in my book) I’ve all but locked up that first string slot. Numbers don’t lie: eight completions for 360 feet passing including a 24-foot bomb to Eron Riley. I’d post a link to the highlight but nfl.com hasn’t answered my emails about posting it yet. I guess some editor fell asleep at the wheel and forgot to record that epic fourth quarter. It’s like the Heidi Game all over again. (NUTSHOT! Don’t be a bitch.)

After Riley caught my tight spiral I ran over to him on the sidelines with a Sharpie and asked if he wanted me to autograph the ball as a memento from the big-boy leagues for when his ass gets cut. He was so intimidated all he could do was crack up and walk away.

A lot of you are probably thinking, “Anybody can have a solid game against a second-string defense!” First, it was a third-string defense. Secondly, if you have a golden-armed second-coming of Joe Montana (me) on your roster, would you put him in harm’s way by forcing him to play against professional athletes? No. You throw the glass-armed third-coming of Bradlee van Pelt (Te-Blow) to the wolves (got eaten up for one incompletion and NO scores) and place me in the delicate bosom of rookies who went to Ivy League schools (Brown has a football team?) and 28 year old free agents looking to survive the first cut and avoid deportation to the CFL.

Here’s a rule of thumb: if the defensive player has an actual photo of himself on his espn.com player page, then Coach isn’t gonna risk me playing against him. He wants me going toe-to-toe with players who have a generic silhouette headshot on every form of ID except their Office Depot work badge.

But it’s great to be back out on the field regardless of the opposition. Brings me back to my Notre Dame days. You know, the thing I miss most about Notre Dame are the dreams I had when I fell asleep on the bus back from practice. One time I was a legit salmon.

Te-blow was in rare form after the game (though I gotta admit, it takes massive huevos to face the media after that errant incompletion and NO scores). Somebody asked him what the pre-season means to the Broncos and he replied that we use these games as a “measuring stick.” I almost lost it. Hey bro! Here’s a hint, a measuring stick is called a RULER. I learned that word freshman year and Te-Blow got through four years at Florida without picking that up? What does he call shoes: Foot-Leathers? Because I do.

Oh, real quick, saw the trailer for Jack and Jill this weekend and I laughed so hard whey protein powder came out of my butt (side effect from the supplements I’m taking).

I thought it would be chill to be able to field some questions from you guys, my fans. I set up a Twitter account without getting a lot of mustard on my keyboard (WINNING!) so tweet me your questions and I’ll try to answer my favorite ones every week on this blog — Twitter.com/JustQuinnBrady. And follow me. Te-blow has 242,000 followers (mostly his cousins) and I wanna try beat that by early, early, early, Tuesday morning. I already have a pretty nasty email lined up and rarin’ to go straight to his mother as soon as I pass him. F it. I’m gonna send it now. It’s too good. (QUINNING!)

All right I gotta head out. My cousin Zach (he was on Home Improvement, whatever.) just dared me I couldn’t eat a phonebook. I wanna drench that shit in water and start drinking before he realizes he was dumb enough not to impose a NO SMOOTHIE rule.

Taking Stock: A Look at the New York Giants' Crash