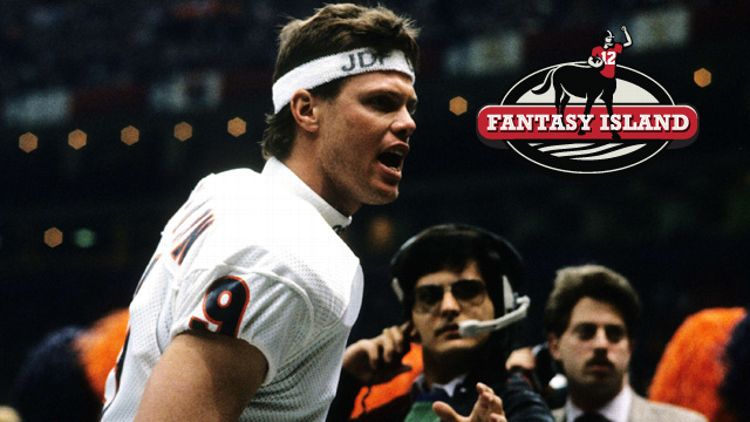 We’re here: Week 16. For those of you lucky enough to still be around, there is boundless glory to be won. To help with the preparation during fantasy football’s most sacred of times, we’ve compiled a short weekly schedule designed to draw from the good (and the bad) methods of readying yourself for the big time.

The Playboy parties, steakhouse dinners, and photo shoots can wait — today is a day for business, the final chance to improve your roster before Week 16. Celebrate your championship berth in style with these waiver-wire pickups.

Kaepernick established a rapport with Michael Crabtree in three weeks, something Alex Smith couldn’t achieve in three years. He gets the QB1 nod over Russell Wilson (available in 72.7 percent of ESPN.com leagues) because he scores more consistently and thrives in night games. I considered leaving the RB slots empty; then I decided to include San Diego’s run-of-the-mill tandem, which has about the same effect. Do not add them unless you are pulling an Eight Men Out and intentionally (but secretly) losing for a greater purpose, in which case you can point to this article as proof that Battle and Brinkley were touted as members of a Week 16 All–Waiver Wire Team. Hilton and Shorts are dependable WRs in deeper leagues, while Pitta is the ultimate risk-reward option.

On January 9, 1969, a rock-star wasted Joe Namath guaranteed that the New York Jets would defeat the 18-point-favorite Baltimore Colts in Super Bowl III. Since then, many players have followed in Namath’s footsteps, gaining Super Bowl week notoriety for a myriad of reasons. But after a highly scientific survey of ESPN’s archives, I’ve uncovered a pattern: The Super Bowl week escapades classified as “confident” usually resulted in a win.

Namath knew well enough to promise fans a Vince Lombardi Trophy, a brash claim that was sure to strike fear into the hearts of Colts players and coaches. Any self-respecting fantasy owner will do the same. Make sure the guarantee is momentous — avoid sending your opponent a passive-aggressive text or e-mail, which will be taken with a grain of salt. Instead, write an op-ed to your local paper, dispatch a singing telegram to your opponent’s workplace, or invest in some skywriting. This is about leaving no doubt.

The scene: Glendale, Arizona. February 2008. It was media day at Super Bowl XLII, and the 18-0 Patriots were flying high, but no one expected candor from a particularly tight-lipped franchise. Frankly, televised cup stacking offers more suspense than a Belichickian media day — that is, until Ines Gomez came along.

TV Azteca’s correspondent hijacked Tom Brady’s press conference and lavished the quarterback with compliments, and finally, a desperate marriage proposal. The most unforgivable part of this wasn’t the breach in media etiquette, but Brady’s response. He rejected the poor woman, saying that he already had “a few Ms. Bradys in [his] life.”

If we’ve learned anything from Namath’s actions, unassailable confidence is what matters here. Brady went on to lose Super Bowl XLII, and who can say it wasn’t because he declined the offer? Qualifying for your fantasy league’s championship game has its perks. Marriage proposals from gorgeous strangers are one of them. Just be sure to say yes.

Continuing with our trend, Jim McMahon represents all that is right with quirky championship preparation. Peeved by the incessant speculation over an ass contusion he suffered before Super Bowl XX, the volatile Bears quarterback mooned a helicopter during practice. Aside from being a brilliant (if NSFW) commentary on the media’s intrusiveness, McMahon’s dropping trou deserves praise for its brazenness. And guess what? The Bears proceeded to annihilate the Patriots, 46-10. I’m not suggesting that you should pull down your pants in public upon seeing a helicopter, but do something in the spirit of it. Confidence always wins.

Legend has it that Packers receiver Max McGee got absolutely hammered the night before Super Bowl I, a game in which he caught two touchdown passes and racked up 138 receiving yards. Drinking heavily before a fantasy championship is a far less complicated endeavor — Vince Lombardi’s curfew isn’t a factor, and 52 men aren’t counting on you to be in peak physical condition. Honestly, there’s no compelling reason not to consume a responsible amount of adult beverages on Saturday night. You should be proud for getting this far. Unwind a little.

Pro tip: Set your lineup before going out, especially if you live in the Pacific time zone. You don’t want to oversleep and wake up after the early games have kicked off, only to find Marcel Reece locked into your FLEX.

Whip up a hearty breakfast, say a few prayers, and call your opponent for one last round of trash talk. Nothing more can be done. Clear waivers, full lineups, can’t lose.