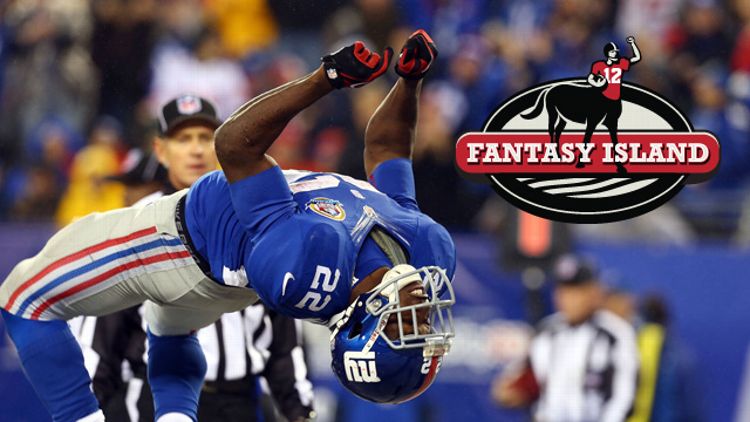 The two most important terms in fantasy are trustworthiness and upside, and this game has a ton of one and hardly any of the other. Anyone who trusted Michael Turner last week might be playing in the consolation bracket, and you’re definitely there if you shot for Jacquizz’s upside. If you did manage to sneak through, look elsewhere for RB help, as the G-men have only allowed five RBs to hit pay dirt all year, and both Atlanta RBs rely on touchdowns for fantasy value. The good news is David Wilson has a ton of that upside this week, with the Falcons having allowed a rushing score in five of the last seven games, and with Ahmad Bradshaw’s gimpy knee, there might not be anything left to keep David Wilson off the field.

Twelve weeks ago I made the assertion that Brandon Marshall will end the year as the no. 1 WR in fantasy, and with two weeks left in the fantasy season, he is barely holding off Calvin Johnson. And there’s more good news for the three most important groups of people in the world (People Named Josh Klein, People Named Brandon Marshall, and Brandon Marshall Fantasy Owners), and Marshall’s facing a Packers D that has been torched by no. 1 WRs this year. Green Bay shut Marshall down in the first game between these two, but I think he keeps the fantasy WR crown for at least one more week. In WR news that you may actually get to use, Randall Cobb is the only trustworthy starter. Greg Jennings hasn’t looked 100 percent since his injury, and Jordy Nelson seems to always reinjure himself halfway through the first quarter.

The Redskins are top 10 against the run, and that should lessen the impact of 20-plus Trent Richardson body blows. Look for his disappointing 3.5 yards-per-carry average to dip once more. Brandon Weeden faces the league’s 31st-ranked secondary, and that makes him a safe start along with leading man Josh Gordon and the upward-trending Greg Little. Every afternoon spent watching D’Angelo Hall means poisonous peacock-strutting, cheap punches to opposing face masks, and then Hall getting torched deep.

A mental image I cannot shake: Rams GM Les Snead perusing the Week 14 box scores, fully enjoying his Monday-morning breakfast routine until reaching the Steelers-Chargers game and Danario Alexander’s robust stat line — seven receptions, 88 yards, and two touchdowns. The Rams could certainly use a receiver of Alexander’s stature and play-making ability, especially with an injured Danny Amendola. Amendola looks to be a game-time decision; don’t insert him into your lineup until he’s declared active. If he doesn’t play and you’re desperate for a receiver, consider Brandon Gibson, who accrued 16 fantasy points in Buffalo.
— Matt Borcas

Bad news: Don’t let that nice game last week fool you; Montell Owens is not a starting fantasy RB, especially not this week. Amassing 91 yards and a score against the hapless Jets is not that impressive, and the Dolphins have the seventh-best run D in the league. If Cecil Shorts is playing, he’s still a viable WR2 in all leagues. Reggie Bush is a flex play, but I’d rather roll the dice on Daniel Thomas. The Jags are bad against the run, and I think Thomas gets the goal-line looks.

Sunday’s Saints-Giants game presented a vexing Catch-22 for me: I needed a solid 20 points out of Drew Brees, but none of them could come from touchdown passes to Jimmy Graham, my opponent’s tight end. Watching the game, of course, was torture. Graham didn’t score any touchdowns, but he seemed to be the only weapon Brees targeted in the red zone. So congratulations if you own Graham. In other news, even a home loss to Andy Reid and Nick Foles couldn’t thwart Tampa’s fantasy studs — Doug Martin and Vincent Jackson performed valiantly, and will do so again vs. the Saints’ abysmal defense.

Firing your offensive coordinator in the middle of the year and expecting improvements is always a tough gamble. Was it Cam Cameron’s fault that the Redskins scored 31 points against the mortal Ravens defense? Will running Ray Rice more help to cover up for an exposed secondary? The Ravens will need all the points they can get with Peyton and the Broncos coming to Charm City. We’ll see more Ray Rice — I mean, isn’t that all new offensive coordinator Jim Caldwell is being asked to do? But Rice won’t find much running room against the Broncos. I do think he tops 100 total yards, but most will come off check-downs and screens. If you have another option, try to avoid Eric Decker. He’s long fallen off Peyton’s radar in favor of Jacob Tamme and Demaryius Thomas. Thomas should be the big star once again, finishing somewhere around eight catches for 100 yards.
— Ben Liebman

Even before the Tom Brady dissection humbled Houston, the Texans ranked a pedestrian 19th against the pass. At this critical juncture I’d rather start perpetual fantasy roster backup Andrew Luck over, say, Brady against San Francisco or Aaron Rodgers at Chicago. Indy’s won seven of eight on the backs of its frenzied passing game and ranks no higher than 18th in the other major categories (passing defense, rushing defense, rushing). Luck will get you 300 yards and a pair of scores. The Pats stumped Schaub, but he deserves a mulligan — Sunday is his first home start since the 527-passing-yard overtime track meet last month against the Jaguars.

Here’s the beauty of fantasy football: This game will be the belle of the ball at 4 p.m. in a lot of sports bars around the country. There is a ton of fantasy goodness in play here, with both RBs being top-10 plays and flex options abounding in both passing games. If you’re making a decision, I think one of Seattle’s WRs will have the best day — Sidney Rice if he plays, or Golden Tate if Rice sits out with his sore foot. I also think that Stevie Johnson can be started with confidence, as the Seahawks secondary has been decimated by ADD and the NFL is against all-night studying.

There is a moment every year when a backup RB stakes his claim as next year’s starter on a subpar team. Sometimes it’s the preseason (Alf Morris), sometimes it’s early in the year (C.J. Spiller), and sometimes it’s in Week 15. Joique Bell looks better than Mikel Leshoure, and this is the week he shows it to all of us. The Cards gave up four rushing scores last week, and I think Bell gets more carries and a ton more yards. Bell may not be a starting play this week, but the takeaway from this blurb should not be to start Joique Bell, it should be to bench Mikel Leshoure.

If I’ve said it once, I’ve said it a million times: Fantasy football isn’t fair. The shrewd owner who invested a middle-round pick in RG3 may lose this week because of an untimely knee sprain; meanwhile, the owner who foolishly drafted Cam Newton in the first round is coasting to a championship thanks to Cam’s inexplicable renaissance. In three weeks, Superman has notched a league-leading 101 points, an especially jarring figure compared to the 16.1 points per game he was averaging through 10 games. Steve Smith will assume the role Mike Wallace played last week, ravaging San Diego’s secondary for deep touchdowns and 100-plus yards. Ryan Mathews is not someone I’d feel comfortable starting with my season on the line; Danario Alexander is.

The Steelers rank fourth in the NFL with only 3.7 YPC allowed on defense, so why should you start Murray? In addition to likely seeing a heavy workload on Sunday, Murray will face a defense whose true ability to stop the run isn’t reflected in traditional stats. I don’t want to get too sabermetric-y on you (secretly I do), but the Steelers actually rank 22nd in the NFL in run defense success rate — the percentage of running plays with which they decrease the opponent’s chances of scoring. It’s basically a complicated way of saying they’ve allowed a low YPC due primarily to game situations. As those even out over time, opponent rushing success will improve. It starts this week with Murray.

Oscar contender this game reminds me of: Flight

There’s only one reason why Flight is an Oscar contender: Denzel. There’s only reason the Chiefs are not being demoted to NFL Europe: Jamaal Charles.
Charles is every bit as disproportionately good for the Chiefs as Denzel is in Flight. He’s a total powerhouse that obscures the rest of the cast behind him. The only other possibility for fantasy production on the Chiefs was Dwayne Bowe, who landed on the IR with a rib injury this week, ensuring that the Chiefs will be worse than ever. I think that the Chiefs, Chargers, and Cardinals (all start with C; coincidence?) should merge for the remainder of the season and play as a single team. But even then, Jamaal Charles would probably be the only Chief who’d play.

Tom Brady proved he was impervious to the hardest-hitting NFL defenses last week. San Francisco is a more complete defense — second against the pass and run — but Aaron Rodgers, Drew Brees, and Matthew Stafford all produced standard fare in losses to the Niners. The Pat that’s peaking at the right juncture is Aaron Hernandez, but he’s a must-sit this week. In the aforementioned games against high-octane offenses, San Francisco put the clamps on Jimmy Graham (33 receiving yards), Jermichael Finley (47), and Brandon Pettigrew (18).

Rex Ryan has taken heat for sticking with Mark Sanchez over Tim Tebow or Greg McElroy, but he deserves more criticism for starting Shonn Greene over Bilal Powell. Ryan is slowly coming around — Greene and Powell split carries last week — but has yet to make a bona fide commitment to the second-year guy from Louisville. If by some chance you belong to the quarter of ESPN.com leagues in which Kenny Britt is available, add him immediately. Since Tennessee’s Week 11 bye, Britt has outscored Kendall Wright by 18 fantasy points and is particularly dangerous in the red zone. Finally, Chris Johnson’s slump ends here — the Jets have held an opposing running back under 100 yards with no touchdowns only twice in 13 games.