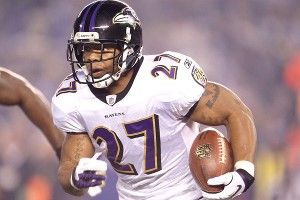 And so ends this dismal installment of Thursday Night Football 2012. Remember when Thursdays used to be must-see TV? At best — this season — NFL Network presented us with “Must C-minus TV.” I fondly recall the legendary names associated with Thursday night television: Cosby, Seinfeld, J. Fox. Just like that, those icons have given way to the likes of Cassel, Hartline, and Heyward-Bey. If nothing else, we shouldn’t be featuring Clay Harbor this close to the anniversary of Pearl Harbor. Too depressing.

Back to what’s important — gambling on men who protect their genitals with plastic! Was anyone else bold enough to urge you to bet that Mark Sanchez would end his coveted interception streak last week? Probably not. I can’t brag too much as, overall, my prop bet predictions took a small dip — bringing my season-long tally to a positive and still impressive 199,500 jermajesties overall.*

Second half Lions (-?) over the Cardinals

If the Cardinals were ever going to cover a second-half spread, you’d think it was going to be last week when down 38-0 at half in Seattle. When are you going to pull together and play with pride if not at that moment? Betting against the miserable Cardinals in the second half has been a winter lock. This week it’s even lockier, as Arizona goes up against the Lions and Calvin Johnson — the greatest garbage time receiver in the history of the National Football League. 10,000 jermajesties

Saints to score over 29 points against the Bucs

Last week, we watched Nick Foles torch (at least lightly scald) the Bucs defense. This is actually nothing new. Tampa Bay has yielded 312 yards passing per game this season. And most of those games weren’t against an angry Drew Brees, who’s trying to salvage his 2012 campaign. Actually, Brees put up 35 points last time these two teams played. Expect the same, if not more, on the New Orleans racetrack. 10,000 jermajesties

The Ravens fired Cam Cameron this week and brought on James Caldwell specifically because Rice wasn’t getting enough touches. And even so, he’s gone over 19 carries three of the last four weeks. If this is a sucker prop bet, I’m sucking hard. 15,000 jermajesties

With Gronkowski on the shelf, Hernandez has become a goal-line favorite for Tom Brady. Last week, Hernandez was targeted 11 times, scoring twice, including once when fatheaded defensive coordinator Wade Phillips forgot to send someone to cover him for one of the easiest mother-effing touchdowns in Monday night’s mother-effing history. Can you tell I lost my fantasy playoff game by fewer than six points? 2,000 jermajesties

Last week, the Cowboys’ four-time All-Pro nose tackle had a heated exchange with owner Jerry Jones after the latter accused him of not playing hurt. Or not not playing hurt — depending on how you look at it. Then yesterday Ratliff underwent surgery for a sports hernia — so take that, Jerry! By the way — is there a more lazily named condition than a sports hernia? Seems pretty broad. If Al Roker tears the lining of his abdominal cavity pointing at the Doppler 5000, is he said to have a weather hernia? Are there traffic and investigative reporting hernias, too? OK, — I’ll stop now.

On a scale of Hagman to Lincoln, how dead is the horse that’s being beaten by former and current NFL officials regarding the Bountygate scandal?

I’m not even sure how to bet this. The point is, enough is enough. Let me get this straight — after all this exhaustive talk and analysis and meetings and appeals, it’s been determined that a bounty did exist and that the players knew about it, but almost no one’s getting in trouble? Super call. Let’s, as fans, collectively put together a slush fund used to pay a bounty on any sportswriter/NFL official who mentions the word bounty from this day forward. I’m in for 3,000 jermajesties.

I would rather watch a marathon of Yes, Dear reruns on CBS than endure this mess. Note to the Red Zone channel: Don’t bother checking in on this game till one of the teams is on the 3-inch line.

I’m only half kidding about this one. Check this out:

If I were Ponder, I’d destroy this video and all of YouTube … oh and I’d also hand off to Adrian Peterson every snap from now until the end of my career. That way, I’d have a fighting chance to play in this league.

Over/under 0.5 fantasy football playoff games in this country riding on the play of any of the New York Jets wide receivers this Monday night

Hill … Cumberland … Kerley … If I were Mark Sanchez, I might regularly try to concuss myself by running headfirst into my teammate’s fat ass, too.

6/1 odds Mick Jagger ends up getting knocked out by one of the juicehead gorillas on Jersey Shore after his recent comments at the Hurricane Sandy relief concert.

During the Stones’ performance at the 121212 show the other night, Mick Jagger requested of the crowd, “If it rains in London, you have to come and help us, OK?” Huh? Pretty insensitive. Let’s see — what do we Americans owe you after a halfhearted performance of “Jumpin’ Jack Flash” and a song I never heard of before? How about we send you the Jacksonville Jaguars and call it even?

9/2 odds that, thanks to unfortunate perilous stunts eradicating Johnny Knoxville and Steve-O from this earth, Carson Daly is able to jump up a couple of spots on the list of Top 20 MTV Born Talents — presented by yours truly last night on Jimmy Kimmel Live.

Let’s pray this doesn’t happen. Did Puck from the The Real World: San Francisco get screwed? I’d love to hear your input on my nonsensical list.

And that’s that. Enjoy week 15. Also — enjoy some delicious Mexican food at the Grantland holiday party thrown by Bill Simmons tomorrow night at his home located at (I apologize — the address I just added was almost definitely deleted from this blog).