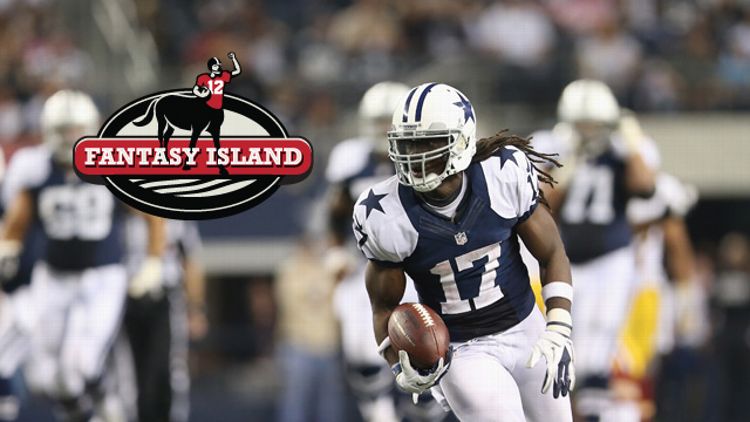 This is when one feels like the quiet teenagers in the cafeteria with an earnest passion for Magic: The Gathering. No more than four people on the planet care about your fantasy team, and they are all bloodthirsty adversaries. The waiver wire is an analog channel of lonely, scattered transmissions and Davone Bess reruns — but no lingering contender can afford to forfeit their turn at the well when buckets of upside linger.

Nerves tangle and overwhelm because it’s rarely Aaron Rodgers or Jimmy Graham on a white horse galloping across beaches while you gleefully reach for the title — it’s falling into the arms of Montell Owens. After the scattered fortunes, your difference makers are mostly in-house, and the start/sit game magnifies — T.Y. Hilton is a high-reward burner, but Nate Washington’s 13 targets at Indianapolis can’t be overlooked — until you read too much Bryce Brown propaganda and start him over Marshawn Lynch.

You have to trust the process and carry on — plug in the five lineup stalwarts, ignore kickers, start a matchup-based defense, and look into filling those lineup holes with one of these shiny new wire guys.

Ben Roethlisberger, QB, Pittsburgh Steelers, available in 6.6 percent of ESPN leagues
On the off chance that Big Ben was unceremoniously let go as a bye-week casualty, he needs to be at the top of your depth chart this weekend against a Dallas secondary overrun with holes. The two best linebackers, the best slot corner, and starting safety Barry Church have all been lost for the season; $50 million shutdown corner Brandon Carr has filled in at free safety; electric rook Morris Claiborne can minimize prime deep threats like Hakeem Nicks and Jeremy Maclin, but that leaves panoramic views over the middle for Heath Miller to exploit.

Greg Little, WR, Cleveland Browns, 86.5 percent
The second-year North Carolina receiver regressed back to being a prospect most of this season but is slowly picking up the slack behind Josh Gordon. This week’s menu features a Washington Redskins secondary that will keep their coworkers from capturing the NFC East by hemorrhaging 289 passing yards a game — good for 31st in the league. Back-to-back four-catch postings are pedestrian, but look for Little to go from 69 yards to 80-plus and a score.

Dwayne Harris, WR, Dallas Cowboys, 99.8 percent
As the index-finger controversy headlines accent the melodrama at Valley Ranch, it’s important to note that even with Dez Bryant, Harris saw eight targets last week. We’ll know what happens with Bryant in the coming days; in the meantime, Dallas’s default deep threat needs to be acquired. Cole Beasley is a hustler, but Miles Austin is good at his job. Kevin Ogletree hasn’t panned out. Without the Dez Dispenser, Harris becomes a five-catches-for-100-plus option overnight. Pittsburgh is tough but wounded, and subsequent desperate shootouts with New Orleans and Washington will yield inflated lines.

Jordan Shipley, WR, Jacksonville Jaguars, 99.9 percent
Stash this deep cut and then set a Google Alert for “Cecil Shorts.” Shipley found a job in late November with Jacksonville, and in Shorts’s concussion-related absence caught five balls for 55 with seven targets in a game that saw Chad Henne throw more than 40 times. Henne will be looking for revenge against his former employers in this Least Interesting State Rivalry classic. Look, I’m a Texas homer, but that can be advantageous because I enjoyed six years of Shipley in college. Being waived by the Cincinnati Bengals after tearing his ACL and MCL last year and missing the Andy Dalton revolution has to sting. It’s time for him to get his Wes Welker on.

David Wilson, RB, New York Giants, 59.7 percent
The perpetually boring but productive Joique Bell is the safer Hail Mary start at running back, but trotting him out there at this juncture is on par with playing prevent when Peyton Manning goes no-huddle. To recap Wilson’s rookie campaign: The first-round pick fumbles an early carry in the Wednesday-night opener and is sent to special teams purgatory because he can’t pick up a blitz. Andre Brown, a journeyman from Baltimore, supplants Wilson as Ahmad Bradshaw’s primary contact, but goes on to break his fibula. After months of relative inactivity, Wilson piles up a team-record 327 all-purpose yards in a single game, including 100 rushing yards and two rushing touchdowns. The Atlanta Falcons are a middling 23rd against the run — the only question is how many carries are budgeted for Wilson.

About Last Night: Tags, You're It