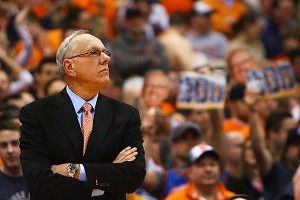 My first experience with live college basketball came on February 12, 1994, when my dad and I made the three-hour trip from the Adirondack Mountains to see Syracuse take on Kentucky. Through an old grad school connection, dad got us in to the home locker room an hour before the game, and that’s where I met one of my heroes, Lawrence Moten. He was on a trainer’s table having his feet taped, and he was nice enough to sign a hat I’ve since lost. Moten never made an impact in the NBA, but he still holds the school record for career points, and he’s the Big East’s all-time leading scorer with 1,405 points in conference play. (Considering the current circumstances, that’s an honor he’ll probably hold in perpetuity.) What stands out in my memory the most are his high white socks, his no. 21 jersey, and how he’d soar above a defender, like he had springs in his shoes, when he rose for a jump shot.

On our way out of the locker room, we passed the three biggest men I’d seen at that point in my life, all wearing Kentucky blue. I was nervous, and asked them (as a group), “Are you Jamal Mashburn?” They laughed and walked away without answering, because Mashburn had left Kentucky the year before. I remembered that fact just seconds after the words left my mouth, and my face stayed bright red through most of the first half. That night, Moten scored 18 points, sophomore John Wallace added 18 of his own, and no. 14 Syracuse upset no. 4 Kentucky 93-85.

I cared about Moten and Mashburn, and I cared about Rick Pitino, the charismatic Kentucky coach who put on a passionate show as he paced up and down the sidelines. But Jim Boeheim? The nerdy-looking man who mostly sat with his chin in his palm on the Syracuse bench? He didn’t move me. There was nothing obvious about him, and when you’re young, it’s harder to appreciate the subtleties.

By my informal count, that was Jim Boeheim’s 427th career win. And after Monday night’s 72-68 win over Detroit, he became just the third D-I men’s coach — after Bobby Knight and Mike Krzyzewski — to reach the 900-win milestone. But defining his legacy isn’t as simple as counting wins, and almost 20 years after that Kentucky game, there’s still nothing obvious about the man.

Boeheim, now 68, grew up in central New York and played for the Orange from 1962 to 1966. In his senior season, as captain, he and Syracuse legend Dave Bing led Cuse to the Elite Eight, where they lost to Duke. Boeheim went on to a short professional career with the Scranton Miners of the ABL, and became an assistant at his alma mater in 1969. He was promoted to head coach in ’76, and has remained at the helm ever since.

Growing up in upstate New York — and I hasten to add that my experience may not be universal — it felt like most of what I heard about Boeheim was negative. Yes, he could recruit talent, but he was a poor game coach, sat on his hands in pressure situations, and routinely underachieved in the NCAA tournament. Also — and this was the big one — it was impossible to win a national championship playing his patented zone defense.

This last piece of wisdom ignored the fact that it took a Keith Smart jumper to deny Boeheim a title in 1987, or that it took one of the best college basketball teams ever — the ’96 Kentucky Wildcats — to stop them in the championship that year. And the mantra became obsolete, of course, when Carmelo Anthony and Gerry McNamara helped Syracuse stun Kansas in 2003 for Boeheim’s first and only title.

But it’s true that Boeheim has suffered his share of disappointments. He’s not Coach K, who has won four national titles and secured 11 1-seeds over his career. (Boeheim has one and three, respectively.) He doesn’t have Bobby Knight’s titles, though he has managed to avoid Knight’s late-career fade. But Boeheim is an icon nevertheless, albeit a confusing one. He can be brilliant and very funny, but he can also be rude and petty. As he’s aged, his dominant facial expression has become increasingly dour, but his teams get better and better.

After Monday night’s win, in an interview with ESPN’s Doris Burke that was broadcast over the PA to the Carrier Dome fans, the Boeheim contrast was on full display. He began with the classy gesture of recognizing Dave Bing as the man who jump-started the Syracuse basketball renaissance as a player. Then, in classic Boeheim mode, he chastised the entire crowd — the same adoring fans who had just given him a rousing cheer — for being too quiet during the game. He wasn’t necessarily wrong about the lack of volume, but I had two immediate thoughts. First, if you want loud fans, don’t play your games in a cavernous dome. Second, this is not the time or place, Jim. Enjoy yourself for once. Smile.

But Boeheim has never given a fig for public perception. This is the man who showed remarkably thin skin when a local reporter noted that he’d lost six games in a row to Pitino. But he’s also a prostate cancer survivor who has helped raise millions for cancer research, and he’s someone who’s been unwaveringly loyal to Syracuse for more than 35 years.

To me, Boeheim is typical as a college coach in the sense that he’s neurotic, but atypical in his fatalism. He has always seemed content to let events play out without exhibiting the controlling tendencies of his contemporaries, and he rarely gets excited during games, regardless of how well or poorly his team plays. Who else but Boeheim, to use the famous example, would have chosen not to call a timeout during the thrilling end of the Sweet 16 game against Georgia in 1996, when John Wallace’s leaner with three seconds left kept Syracuse’s dream season alive? What other coach spends more time sitting than standing during games?

In the long run, it’s worked. There have been so many great moments in the Boeheim era — nine regular-season Big East titles, five Big East tournament championships, the six-overtime game against UConn, the three national games, the Warrick block for the title, McNamara’s heroic four days at the 2006 Big East tournament, so many legendary clashes with Georgetown — and throughout them all, Boeheim has remained his enigmatic self.

And though his reputation for underachieving has diminished since 2003, there’s still a suggestion that Boeheim has let opportunities slip away. That critique has re-emerged lately, after he failed to make the Final Four with 1-seeds in 2010 and 2012. He’s 5-9 all time in Big East tournament championships, which is easy enough to call a mediocre record if you ignore the fact that it’s a pretty incredible feat to reach title games 14 times in 33 years in the country’s best conference.

But what about the Big Dance? In an effort to evaluate his tournament record against other legendary coaches, I devised an imperfect system. I looked at Syracuse’s seedings using Database Sports (plus the brackets for 2011 and 2012, not included), and figured out how often they underachieved, overachieved, or went to the same round as expected. A 1-seed, for example, would be expected to reach the Final Four, while a 2-seed would be expected to reach the Elite Eight, and 3- and 4-seeds should lose in the Sweet 16.

I found that since seeding began in 1979 (Boeheim made two tournaments prior to that year), he’s overachieved five times, reached his expected round 11 times, and underachieved 11 times. That’s a 31.3 percent “overachievement rate,” and a 59.3 percent “average or better” mark. It doesn’t sound great, but let’s look at how that compares to some other modern coaching icons, with records and percentages:

(Note: For 1-seeds, I counted reaching the final game or winning the title as overachieving, regardless of whether they were considered the “best” 1-seed.)

Obviously, this is not a perfect system. An 8-seed that falls to a 9-seed in the round of 64 is evaluated the same way as a juggernaut 1-seed that gets upset by a 9-seed in the round of 32, which, in real life, is wildly different in scope. Also, it’s much easier for a lower-seeded team to avoid underachieving, which means that earning 1-seeds will likely lower your percentage. And it doesn’t measure titles, which always come to define a coach’s legacy. But as a pure measure of how often a team lives up to its seed, it shows that while Boeheim doesn’t overachieve very often, he reaches at least his expected round more often than any of the other major coaches except Roy Williams. So maybe he doesn’t fail in March quite as often as we might think.

There’s one other bit of common wisdom that’s been going around the college basketball world for the past two weeks, and that’s the idea that Boeheim will never catch Krzyzewski on the all-time wins list. Coach K is currently 36 wins ahead, and he’s three years younger. Neither man has shown any signs of pulling a Bobby Knight and losing their edge, so the definite advantage goes to Coach K. But Boeheim only needs two extra seasons to catch him, and consider his personality: wry, dour, curmudgeonly, fatalistic, cynical. What do we know about those types of people? They live forever! In the Krzyzewski-Boeheim horse race, my money’s on Jim.

Two final thoughts: First, watch Michael Carter-Williams, Syracuse’s sophomore point guard and the nation’s assists leader, dish out 10 dimes Monday night. There’s no point guard in the country with his kind of vision, except maybe Michigan’s Trey Burke. He’s a genius inside the lane, finding passing lanes that seem inches wide, and he’s terrific at setting up his teammates for 3s (especially sixth-man extraordinaire James Southerland, as you’ll see), when the defense collapses.

Last, I have to take a moment to recognize the nation’s best dunker, 6-foot-6 Doug Anderson, for his six incredible jams against Syracuse on Monday night. Considering the fact that he can’t do much else on offense, he may be the first true “dunk specialist.”