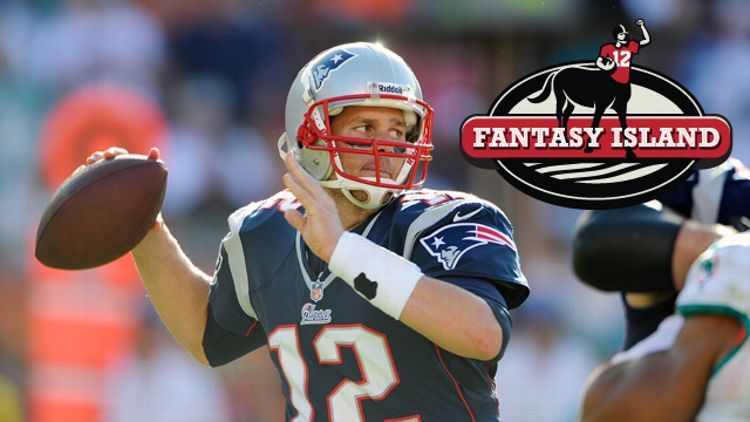 For as good as the Rams have played NFC West opponents — their divisional record currently stands at a surprising 4-0-1 — they’ve been horrendous against the AFC East. The Dolphins eked out a 17-14 win over them in Week 6, the Patriots clobbered them in London, according to a number of websites, they were defeated soundly by the Jets just three weeks ago. (I, for one, remain unconvinced that the Jets actually traveled to St. Louis and pulled off a 27-13 win. Are there witnesses willing to testify to the veracity of this?) Anyway, the Bills seem to have figured out the lethal Fred Jackson/C.J. Spiller tandem — 11 and 13 fantasy points last week, respectively — and they will complete the AFC East sweep on Sunday. Danny Amendola cannot be trusted anymore; the only Ram in your starting lineup should be Steven Jackson.

Don’t look now, but BenJarvus Green-Ellis has become exactly what I thought he was going to be at the beginning of the year (it just took him 10 weeks to get there), a consistent workhorse who’s going to get goal-line touches and a boatload of carries every week. He’s topped 100 yards each of the past three weeks, and against a team that just got worked by Bryce Brown and has given up a rushing TD in seven of its last eight games, I’d expect that trend to continue. Start the Law Firm with confidence. On the other side of the ball: DEZ(!!!!) has been absolutely on fire the past three games, and is a solid top-10 play this week. I’d still be wary about starting DeMarco Murray; he averaged less than four yards a carry last week against a phoned-in Eagles’ D, and the Bengals are fresh off holding Ryan Matthews to 26 yards last week. Murray has been on your bench basically the whole season, and he needs to stay there this week.

The mid-season think pieces about Brandon Weeden made an undeniable point: for a rookie, this dude throws lots and lots. Three months into his starting tenure, the attempts are starting to net numbers: 364 yards and two scores on the West Coast last week, and also back-to-back dates with the Kansas City and Washington secondaries. The trickle-down economics point to an uptick for explosive Browns rookie Josh Gordon, and in deeper leagues, the sophomore-slumping Greg Little. The talent is there, and these final weeks will be about crystallizing the rapport. I took an elective called Fundamentals of Acting in college; it was a class of maybe 15 students and one of those happened to be Jamaal Charles. The Monday morning after setting a record for rushing yards by a freshman against Oklahoma, he was in class bright and early doing practical work in scenes from plays. That’s commitment you can depend on.

T.Y. Hilton is the most impressive playoff difference-maker this side of Cecil Shorts. Also, I implore you to ignore his receiving corps colleague Donnie Avery, who hasn’t caught more than five passes in a game since Week 2. The frantic game-winner at Detroit was a checkdown, and Hilton has three touchdowns in three weeks with two identical box scores of six catches for 100 yards. Vick Ballard is a clutch little dude, and I’m all in. Chris Johnson enjoyed 117 yards from scrimmage the last time these teams met for brunch and mimosas on a picturesque October morning. The Titans receiver you want (or, more likely, have to cart out there and pray for) depends on the scoring system: Kendall Wright quietly has 54 catches; Nate Washington’s Team Locker loyalty has paid off to the tune of 633 receiving yards.

Aside from Ryan Lindley’s Rookie of the Year candidacy, did anything crash-and-burn faster in the 2012 NFL season than Percy Harvin’s MVP campaign? There was a time when Harvin, who was placed on IR Wednesday, was thought to be one of the few non-QBs in play for the award. Nowadays, Adrian Peterson, J.J. Watt, Arian Foster, and, improbably, Zoltan Mesko rank ahead of him. Of course, the blame shouldn’t fall squarely on Harvin’s shoulders; Christian Ponder has had his own role in the downfall. Which raises another question: Why isn’t Joe Webb starting? Selfishly, I want Webb to start because I think he’d be an intriguing fantasy player, but I’m sure Leslie Frazier can drum up some legitimate football reasons to make the switch.

Charlie Batch shared an embrace with Ben Roethlisberger after the Steelers’ win in Week 13 that would rival the hug Mel Gibson gave his son in that “GIVE ME BACK MY SON!” movie (it’s either Ransom or Payback, and I’m too lazy to IMDB it). I bet he’s DESPERATELY hoping that Roethlisberger comes back this week and takes back over. He doesn’t want to have to maintain Game 2’s level of play. Jonathan Dwyer was the go-to back early, but shared touches with Ike Redman in the second half. He’ll start again this week and should see a lot of work against the Chargers. Speaking of which …

The Chargers have gone five-plus quarters without an offensive touchdown. Here, though, is what they did have last week:

Expect Pierre Garcon’s resurgence tour to continue against the depleted Ravens defense — if I were his MVP campaign manager, I’d publicize the fact that the Redskins are 5-1 with Garcon and 1-5 without him. Garcon’s return has also bolstered RG3’s run for the fantasy-points title, a race in which he leads Tom Brady 259-245. (And, let’s be honest, that flip-fumble to Josh Morgan on Monday night should’ve counted as a touchdown pass.) Like Nick Saban and PB&J sandwiches, Ray Rice is so good, he’s boring. The opposite is true for Joe Flacco, who’s wildly inconsistent but always entertaining.

Cam Newton is playing for offseason endorsements and I can’t be mad at the hustle. To be painfully obvious, drop any lingering Panthers backs because in the red zone, Cam Juice is going solo down the middle from here on out. I expect million dollar smiles and an S on the chest. The last time Matty Ice and Killa Cam got together for horseshoes and lemonade in late September, each southern gentleman scored thrice. Newton tacked on 80 rushing yards and had time to bake cupcakes for his mother, color-code his headphones, and indulge in a cinematic late-night workout. The name-brand receivers are comfortable plays — look for Roddy White to once again emerge as the most targeted and productive.

Here’s what Rex Ryan had to say about the most important position in sports on Tuesday: “I’ve got three quarterbacks I feel good about. I think we’re in a lot better situation than probably a lot of teams.” Where has Rex been hiding these three QBs he feels good about? And, yeah, the Jets are probably in “a lot better situation” than most Arena teams, but what’s that matter? Shonne Greene rushed for 104 yards last week, momentarily stalling the Bilal Powell bandwagon. Chad Henne and Justin Blackmon fell back to earth in Buffalo, but not Cecil Shorts (7 receptions, 77 yards, 1 touchdown), who’s challenging Pierre Garcon for the “Best NFL Receiver from the University of Mount Union” crown. Montell Jordan Owens will start at running back for the Jags.

Ryan Tannehill has thrown one TD or less in all but one game all season. He’s on a pace for NINE TD’s ON THE SEASON. NINE. Not a typo. And also? Sixteen interceptions. OUCH. With San Francisco coming up next week, I’m not optimistic about any Dolphin in this game. Not the rushers, not the receivers, not the QB. Mario Manningham is injured so Michael Crabtree may see another big week. The Rams held San Francisco’s offense in check, but the Dolphins won’t.

You have to taper hopes for the banged-up Hakeem Nicks. The on-again, off-again foot and knee issues are Carrie and Mr. Big status, and he took a particularly nasty shot to the nose on Monday night. In November, Nicks had nine total catches against the Packers, Cowboys, and Steelers. He’s only eclipsed 100 receiving yards once this season. The most frustrating part is that easy money matchups aren’t meeting their projections, and now it’s the fantasy playoffs, and no thanks. Drew Brees has seven interceptions over the last two weeks, but his steady captain flow will get back to basics: he’s undefeated with no picks in four Giants showdowns.

The Seahawks are 5-0 at Qwest Field and 2-5 in away games, but do their players score more fantasy points at home than on the road? (Let the Jeopardy! theme play for a bit.) Answers: “Yes” for Russell Wilson, “no” for Marshawn Lynch, and “usually” for Golden Tate and Sidney Rice. Wilson has been on a roll since the bye week and qualifies as a high-upside start this week. Both Tate and Rice scored 15 points in Chicago, putting to rest any concerns that they couldn’t both do well in the same game. The Cardinals set fantasy football back 33 years in their 7-6 loss to the Jets and brazenly continue to sabotage Larry Fitzgerald’s career. On the bright side, Rashad Johnson averaged a staggering 40 yards per carry last week.

Lions head coach Jim Schwartz wins Funniest NFL Coach Award for Week 14. (Yes, I’m keeping track. Mostly this season, it’s been the Jim Harbaugh show — albeit unintentionally — with an occasional intentional appearance from Greg Schiano. Last year it was Rex Ryan, but Mark Sanchez fumbled his sense of humor away in Week 5.) Schwartz confirmed to the press that Titus Young will undergo surgery for his injured knee “unless he doesn’t show up.” Oh, my. Someone has alienated someone. With Ryan Broyles freshly on the IR, Mike Thomas will play opposite Calvin Johnson until it’s his turn on the Inevitable Detroit Lion WR Season-Ending Injury Carousel.

The story in Packers camp is that they’ve agreed to terms with Ryan Grant. Expect him to become increasingly more important in the Packers’ playoff run. He’s expected to play behind Alex Green, but he’s experienced in the Packers’ offense so don’t be surprised if he gets work early if Green is ineffective. Jordy Nelson continues to break my heart this year. When I play him, he gets injured in the first quarter. When I sit him, he catches three TDs. Week 13 was a “get injured in the first quarter” week. Sigh. Perhaps Greg Jennings will show up a little more this weekend.

1. This is the highest-rated MNF of the year.
2. Andre Johnson scores two TDs.
3. Brandon Lloyd has more than seven targets, and less than 40 yards receiving.
4. There is one D/ST score for each team.
5. Matt Schaub throws for more scores than Tom Brady.
6. Jon Gruden says “I LOVE FOOTBALL.”
7. At least 60 percent of fantasy matchups will be swayed by this game, but that will not stop Ted From Accounting from alerting me that his fantasy matchup will be swayed by this game. I WILL NOT CARE, TED. STOP TALKING TO ME.
8. OFF TOPIC: If the New Orleans Hornets switch to the Pelicans, and the Charlotte Bobcats switch to the Hornets, in how many years will it be cool and ironic to wear the Michael Kidd-Gilchrist Bobcats jersey I just bought?
9. NE 37, HOU 35
10. Kat Gotsick’s waiver wire column will be both insightful and re — oh wait, that’s for my Fantasy Fantasy Island column. Stephen Whiting is killing it.

GOOD LUCK IN THE PLAYOFFS!!!