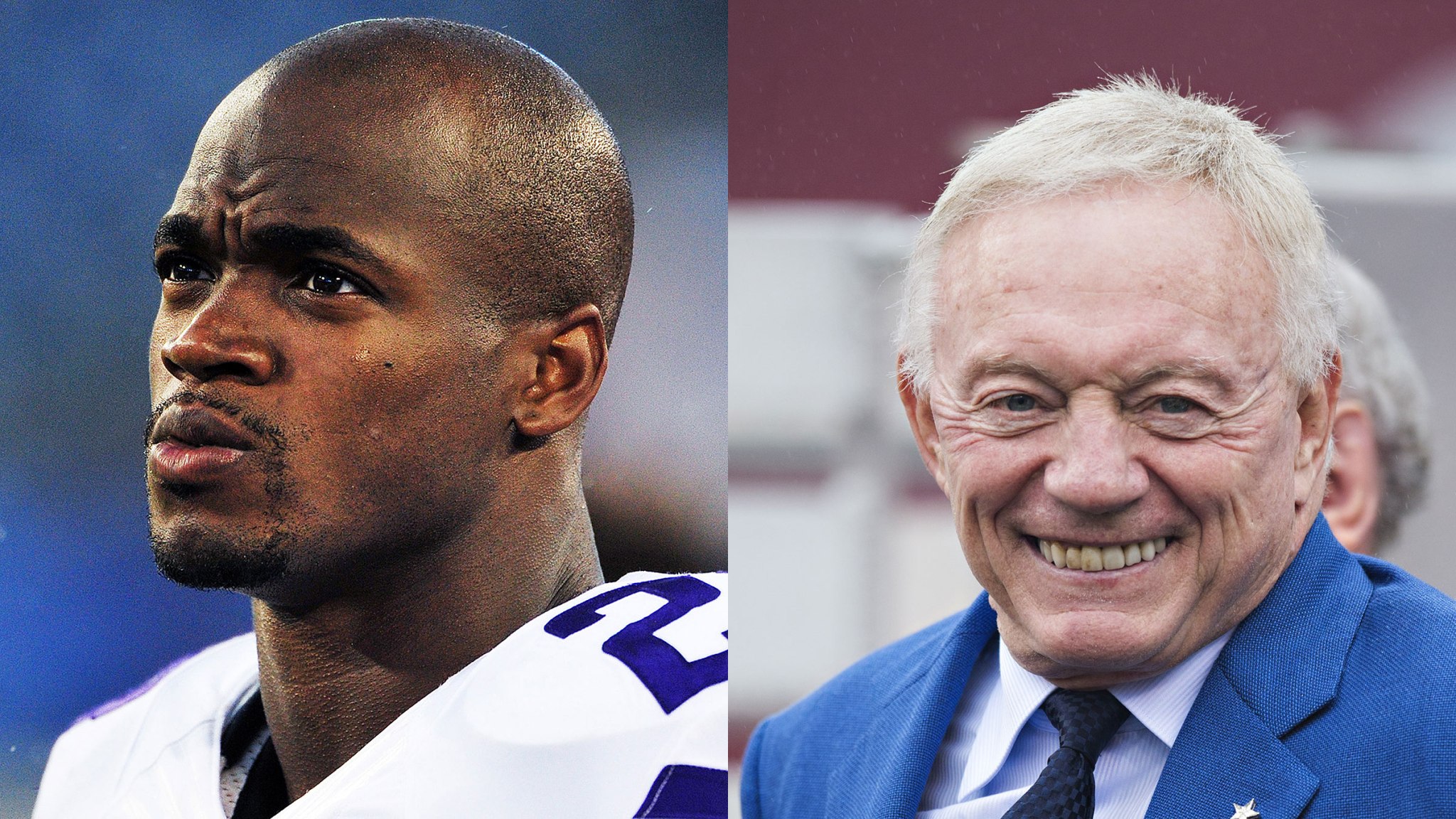 Last week, on the heels of the Seahawks not picking up the fifth-year option on his rookie contract, some interesting chatter started to emerge about Bruce Irvin. The Atlanta native was approached by someone from BlackSportsOnline.com at a Hawks game and made some comments about wanting to be in Atlanta next season after his contract expires. “Atlanta is where I want to be,” Irvin said. “Believe that.”

Yesterday, Pete Carroll attempted to explain that the comments were taken out of context, and that Irvin was referring to living and working out in Atlanta rather than playing for the Falcons. Either way, the incident got us wondering about the ultimate destinies for a bunch of players across the NFL. Some players just feel like they’re meant to play for a certain team. For example, there’s an embattled running back who seems fated to end up on the Cowboys and an underutilized, undersize wide receiver who looks like he was created in Bill Belichick’s lab. There are no real criteria here, other than matching players and teams that make sense because of narrative symmetry, scheme fits, convenient locations, or whatever other reasons we decide to make up. Keep in mind: This is supposed to be fun!

Adrian Peterson to the Dallas Cowboys

Sure, it’s too easy, but c’mon. Even if you disregard what Peterson and Jerry Jones text about late into the night, there are plenty of other reasons why this would be perfect. Peterson’s hometown of Palestine is two hours from AT&T Stadium, and in a state with plenty of high school football lore, Peterson’s legend is still bigger than most: Just imagine what Peterson looks like today and put him on a field with a bunch of linemen about his size, and that’s what it was like.

From a pure football perspective, it couldn’t really be a better fit, either. Stylistically, Peterson is more like DeMarco Murray — upright, downhill, I-chuckle-at-your-arm-tackles — than almost any back in the league. Except he’s better. There have been stretches of Peterson’s career in Minnesota that featured quality offensive lines, but what’s coming together in Dallas is … I almost don’t want to talk about it out of fear of jinxing something beautiful. It’s like mentioning a perfect game. After the draft, the dream for this is mostly — if not totally — dead, but there’s no harm in imagining it. With Peterson in the backfield, Tony Romo’s completion percentage would land somewhere around 87 percent.

I’ve said on the Grantland NFL Podcast that Hawkins could catch 150 passes in New England, and I was only sort of kidding. Hawkins hasn’t reached Fitzgerald-like levels of quarterback futility in his career, but as he gears up for Year 5, it’s getting close. After three seasons of the Andy Dalton experience, Hawkins landed in Cleveland and took part in that Hoyer/Manziel/Shaw debacle last season. He led the team with 63 receptions and 824 yards, but the Browns offense couldn’t have been less suited to his skills. Only the Cardinals and Bucs averaged more air yards per attempt than Cleveland last year — but looking at the spectrum of wide-receiver body types in the NFL, it’s hard to find two guys less alike than Andrew Hawkins and Mike Evans.

Hawkins is a 5-foot-7, quick-footed nightmare who could be very useful in the right quick passing game. Julian Edelman has long since turned into more than a slot receiver for the Patriots, who could easily find some space in their offense for someone with Hawkins’s talents. It also seems like Hawkins is the type of guy who would love life in the football laboratory that is New England. I might be wrong, but I can’t remember any other NFL players wandering the halls of this year’s Sloan Conference like the rest of us nerds. He wants to know everything he can about the sport, and working with Belichick & Co. feels like a good place to start.

Max Unger to the Denver Broncos

For all of us zone-blocking center fans out there,1 this offseason has been tough. Chris Myers, the savvy master of the position for years, was released by the Texans. Then Unger was dumped by the Seahawks in favor of some big tight end. The 29-year-old missed some time over the past few years, but Seattle’s running game was at its best with him in the lineup.

With Myers gone, Houston would actually be a natural fit for Unger, but this isn’t about team needs. It’s about perfect football homes, and right now, Denver fits that bill. For a guy from Hawaii who went to college at Oregon and has spent his entire pro career in Seattle, New Orleans is considerably farther east than anywhere Unger has ever played. Denver would be a significantly smaller departure, and with Gary Kubiak in place as Broncos coach, it would also be a perfect spot schematically. Presumably because Manny Ramirez didn’t align with what Kubiak wants at the position, the Broncos jettisoned their starting center as part of the trade up for Shane Ray. Unger does fit, and come on, tell me this guy wouldn’t do well in Colorado.

Cordarrelle Patterson to the Baltimore Ravens

When Bill Barnwell and I were mocking the first round of the draft, the possibility of DeVante Parker going to the Vikings came up. As I listed off the receivers on Minnesota’s roster, I forgot Patterson. This is how far we’ve fallen in the span of one season: I went from thinking Patterson was the most exciting player in the league to forgetting he was a person.

Mike Zimmer is saying the right things about Patterson’s future in Minnesota, but the cratering of his usage and impact during Year 2 was disheartening. There are a number of places where he would be useful, but I landed on the Ravens. Over the past two seasons, Marc Trestman used Alshon Jeffery as the get-the-ball-in-his-hands receiver in the Bears offense. There were a lot of end arounds and quick throws for a guy who was good but not great at making the most of getting the ball in space. Those plays are where Patterson is at his best. And it’s not like the Ravens’ depth chart is packed with wide receiver talent. Steve Smith is 36, and with Jacoby Jones gone, Baltimore could also use some juice in the return game. It could be the Ravens, but really, on behalf of anyone who enjoys fun, I just want a team to save Patterson from his Norv Turner–forced exile. We all deserve it.

Hue Jackson trending toward a downhill running game in Cincinnati makes plenty of sense for a team with shoddy quarterback play and a solid offensive line, but Jeremy Hill’s emergence likely means a diminished or different role for Bernard. Aside from their playoff shellacking at the hands of the Colts, a game in which they needed points in a hurry, Bernard ceded primary control of the backfield to Hill down the stretch last season. If a team wants to make Bernard its passing-down back, that’s fine with me. He’s plenty good at it. Let’s just make it the right team.

Four times in the past five seasons, the Saints have had two backs finish in the top 15 for DYAR for receiving yards among running backs. In 2012, it was two backs in the top six. An explanation for DYAR is here, but the key factor is that it’s not a rate stat, meaning we’re not talking about efficiency. This is total production, and it points to how much the Saints get from running backs in their passing game. With Darren Sproles, Pierre Thomas, and Travaris Cadet gone, it feels like Bernard’s destiny is to pair with C.J. Spiller as the Saints’ next terrifying pass-catching duo.

I’ll always remember the 2015 draft for what didn’t happen, and what didn’t happen is Chip Kelly trading away his entire team. NFL Network’s Albert Breer reported before the draft that teams considered Cox and Kendricks available, which isn’t all that tough to believe. Both were part of Andy Reid’s last draft class in Philadelphia, and in terms of X’s and O’s, they aren’t perfect fits in Bill Davis’s defense. Here’s the thing, though: They’ve both been great in spite of that.

The Eagles have moved Cox around the way you’d expect for an end in a hybrid defense, but he’s still built to be a 3-technique tackle in a 4-3 defense. Cox was hugely productive for Philly last year, but I’d love to see what he could do with a simplified role like the one Gerald McCoy has in Tampa Bay or what Ndamukong Suh had in Detroit: “See the quarterback? Line up in this spot every time2 and go ruin his day.” Those defenses are harder to find these days, but Dallas has one of them, and it could use an interior force to go with the edge-rushing crew it’s put together. I also just really want to see what Cox could do after an offseason with Rod Marinelli.

Minnesota’s need for Kendricks has fallen off a bit after it drafted his brother, but that’s kind of the point here. Who wouldn’t want to see two brothers in the same group of linebackers? Younger brother Eric fills one spot in Zimmer’s defense, but Chad Greenway’s contract is up at the end of the season. Imagining a nickel package with the Kendricks boys at the two linebacker spots and Anthony Barr with his hand on the ground is too fun to ignore.

While most of these have been an excuse to play with destiny, this one has the feel of pure, distilled, Imperator Furiosa–style redemption. Griffin’s fourth season in Washington can’t really go worse than the past two, but there also hasn’t been much indication that Jay Gruden is invested in Griffin as the franchise’s quarterback.

If we’re picking the most hospitable spot for Griffin, Houston feels like the logical choice. Griffin is from Texas. There’s a freaking statue of the guy three hours from Houston. Based on numbers alone, Baylor doesn’t have the fan base of Texas or A&M, but I’m guessing there are still enough memories of Griffin lighting those teams on fire for Houstonians to get onboard. That’ll be especially true if the Hoyer-Mallett-Savage experiment goes awry and it becomes clear that the Texans’ roster is a quarterback away from coasting to the playoffs. I could see Bill O’Brien as the type of coach who might already be out on Griffin entirely — he’s hardly the kind of prototypical pocket passer O’Brien’s worked with in the past — but for our purposes, the appeal of the reclamation project is too much to pass up.