The NFL Awards They Should Give 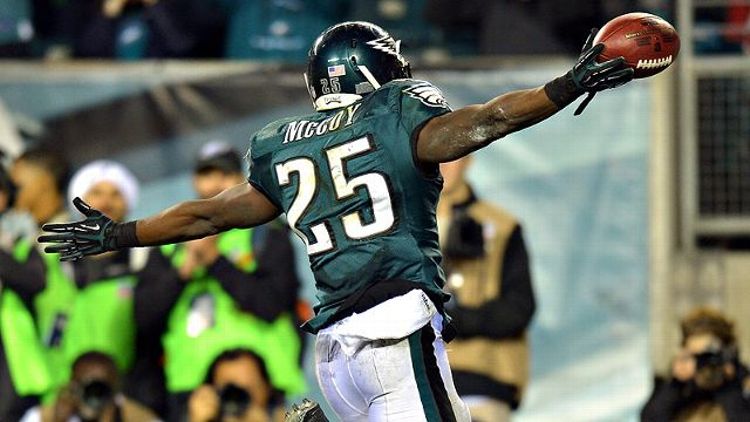 The NFL regular reason is over, and you know what that means: Awards season has begun! It’s that time of the year for final arguments about who deserves football’s hardware, but rather than rehash the cases for MVP, Defensive Player of the Year, and which rookie running back ran for the most yards, we decided to come up with a few awards that aren’t actually handed out.

The deserving Defensive Player of the Year is also the player who made the most significant jump in the past 12 months. The jump in Quinn’s sack total — from 10.5 last year to 19 this year — is massive, but it’s only a small piece of the explanation about how much better Quinn was in 2012. Even with a 19-sack season, we’re talking about one play per game among 60 to 70 snaps. What made Quinn maybe the best defender in the league this year was that he was disrupting four or five passes every week. Adding seven forced fumbles doesn’t hurt.

A rookie at 21, and a member of that already historic 2011 defensive draft class, Quinn played only two years of college football after being ruled ineligible for his junior season at North Carolina. Flashes of what he might become started near the end of last season, but I still don’t think anyone could have imagined he’d be the best pass-rusher in the league this quickly. Any excitement about the Rams’ future begins with him.

It’s not that Casey’s level of overall production has taken a huge step forward this year — it’s that the type of production has changed. Last year, in his second season, Casey consistently showed the ability to be around the ball and make plays, but a combination of conditioning concerns and injuries kept him off the field in a lot of passing situations. This year, he managed 10.5 sacks as a defensive tackle.

No player was a more welcome interruption of my regularly scheduled programming this year than Patterson. His nine touchdowns included two kick returns, three rushes, and four receptions, and each seemed to include him running around or away from at least three players. I can imagine that after watching him in the return game, Vikings fans must have been thinking that all Patterson needed was a chance. They were right. After getting four or fewer touches on offense in each of Minnesota’s first 10 games, Patterson finished with a score in the Vikings’ final five contests. It’s hard to be the most exciting player in football with so few opportunities, but somehow, I think Patterson might have pulled it off.

This might be heresy, but sometime around Gordon’s 95-yard touchdown against Jacksonville, his casual dominance started to remind me of Randy Moss. They’re different players — Moss’s jump-ball supremacy still stands alone — but each makes it look a little too easy. The long striding helps, but there’s something else about it that’s hard to pin down. Either way, Gordon’s big-play ability stands alone in 2013. As Bill Barnwell noted last week, only Calvin Johnson averaged more yards per game in a non-strike season since the merger. Gordon’s 30 catches of 20 or more yards are three less than the Panthers had — as a team.

Interior Lineman of the Year

The season Watt just had is a testament to how little we care about individual greatness if a player’s team is a flaming car wreck. Before the season began, one of the prop bets Barnwell and I discussed on the Grantland NFL Podcast was Watt finishing with over or under 15.5 sacks. We both went under. Sack numbers are hard to replicate year-to-year, and it turns out we were right. Watt finished with only 10.5, but aside from that, this season wasn’t all that different from his historic 2012.

No player was as constantly disruptive, no one hit the quarterback more, no one made more tackles for loss in the running game, and no one earned as much attention from opposing offensive line schemes. In Houston’s 13-6 loss to the Jaguars, Watt finished with eight tackles (six on runs that went three yards or fewer), a sack, and five quarterback hits. He may be a fixture at the Pro Bowl for as long as he’s a semi-productive player, but this year, he was still probably the best defensive player in football.

Along with a blitzing Lavonte David, McCoy was Tampa Bay’s pass rush this season. He finished with only nine sacks, but if McCoy keeps this up, that total will be about double digits every year for a while. If the rumors of Lovie Smith to Tampa Bay are true, the idea of a newly fired Rod Marinelli joining Smith and coaching up McCoy is a pretty attractive one.

Take your pick. McCoy wasn’t just the most prolific runner in football this year; he was also the most fun.

I think he deserves it just for this catch alone.

Executive of the Year

I know, I know — this is an actual award. But considering how little time we ever spend discussing or debating it, I thought it was worth bringing up.

What makes Keim’s case so impressive is that it includes a first-round pick who played a total of zero games this year. Offensive line is clearly the Cardinals’ weakest point, and they won 10 games while playing an entire season without seventh overall pick Jonathan Cooper. The rest of Keim’s moves were just that good.

The hiring of Bruce Arians as the head coach and Todd Bowles as the defensive coordinator are the big ones, but the way that Keim filled out an already solid defense was remarkable. Karlos Dansby and John Abraham were both run out of their respective towns last offseason before coming to Arizona on short-term deals and making massive impacts. And few 2013 draft picks contributed more than Tyrann Mathieu. One that came close was Andre Ellington, whom the Cardinals took in the sixth round in April. Add that to the sixth-round pick Arizona gave up for Carson Palmer, and it’s pretty clear which team made out the best with its late-round options this year.

Telesco’s performance in his first year checks a lot of similar boxes. He hired a pair of coaches in Mike McCoy and Ken Whisenhunt that helped revive both Philip Rivers and Ryan Mathews’s careers, found Keenan Allen in the third round of the draft, signed Danny Woodhead and King Dunlap for nothing, and before he was hurt, Dwight Freeney was set to be Telesco’s version of Abraham. San Diego’s defense was an injured mess, but the rest of Telesco’s choices are a big part of why his team is in the playoffs.

This was a tough choice, so I just decided not to make it. Allen will likely be the Offensive Rookie of the Year after a season every bit as good as the one A.J. Green had in his first year, but fellow third-round pick Warford may have been even better for the Lions. Finding immediate starters in the first round is a challenge, but both the Lions and Chargers managed it two rounds later.

The same goes for Mathieu. Keim and his staff deserve a lot of credit not only for recognizing Mathieu’s value among all the noise, but putting together a coaching staff that would be creative in how to use him.

Hardy had already made himself a lot of money before his four-sack game against the Falcons sealed the division for Carolina, but putting that type of cap on the season certainly doesn’t hurt. He has said he wants to be back in Carolina next year, and I’m assuming that, despite contract issues elsewhere on the roster, the Panthers will do what they can to make that happen.

Hardy’s 15 sacks are half a sack more than Julius Peppers ever had in Carolina, and his overall value isn’t too far off from that of the Panthers’ previous superstar defensive end. What makes Hardy so attractive in free agency is that he’s the perfect defensive lineman for today’s game. His ability to line up all over the formation and stop the run makes someone irreplaceable.

Graham was going to get a massive contract either way, but he certainly helped himself with another ridiculous season. What will be interesting is whether his agents really can pull off the argument for Graham being a wide receiver rather than a tight end. I’m not sure how that designation works, but lining up next to a tackle every so often shouldn’t be the reason.

The Pro Bowl is the Pro Bowl, so this probably isn’t worth the time, but these two are particularly awful oversights. Campbell is the best player on one of the league’s best three defenses and among the most versatile defensive linemen in the league. David just finished the second season in NFL history with at least 100 tackles, five sacks, and five interceptions. The Pro Bowl is the worst.

His snub was probably even worse last year, but Wilkerson is right there with Campbell in how they affect the game from a position that’s chronically undervalued.

Coordinator of the Year

There’s an argument to be made that Chip Kelly is the coordinator of the year, but for simplicity’s sake, the pool of candidates here doesn’t include head coaches who call plays.

We saw 17 weeks of NFL football, and I still have no idea how the Patriots won 12 games. Apparently, it’s because New England somehow has the fourth-best offense in football. I need an explanation of how that’s possible. Having Tom Brady helps, but I still don’t understand how McDaniels took this group and made it a viable NFL offense. Through 15 weeks, no quarterback had targeted rookies or players shorter than 6-feet more than Tom Brady, according to ESPN Stats & Information. If the Bears’ receiving corps looks like an NBA team, the Patriots look like a middle school team.

The Pats have survived the same way they always do — with the ability to make first downs out of nothing. New England is always using motion and other tricks to turn those short throws to Danny Amendola and Julian Edelman into extensions of their running game, and even now, it’s still working. Oh, and we haven’t mentioned that McDaniels also lost maybe the best right tackle in football in November.

Nobody wants to hear excuses about injuries, and that’s probably Zimmer’s fault. The Bengals lost their two best defensive players for the season in Geno Atkins and Leon Hall, and they still managed to put together a top-five defense. What Zimmer has done with midround picks (Michael Johnson), undrafted free agents (Vontaze Burfict), and other peoples’ junk (Terence Newman and Reggie Nelson) defies explanation. If this isn’t the year he gets a chance as a head coach, I don’t know when it will be.

The book on Whisenhunt has become pretty clear — give the guy a viable NFL quarterback, and he’ll give you a top-10 offense. It started with Ben Roethlisberger, continued with Kurt Warner, and now it’s happening with Rivers. It’s not a surprise that Whisenhunt is already getting consideration for his next head coaching job.

Dispatches From Bowlvania: Milkshakes Were Made