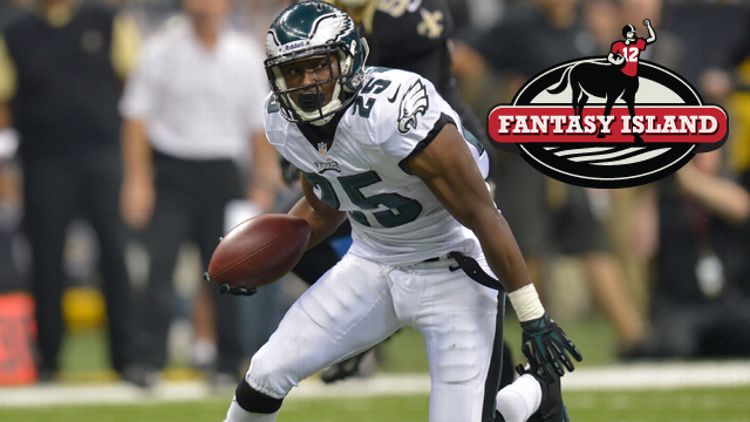 The fantasy football season isn’t quite over, but as of this week, the Fantasy Island competition is. After 16 weeks and a very tight race, we’re pleased to announce that Matt Borcas has won a spot as our fantasy football writer. This week is Matt’s soft open of sorts, and when it comes time for rankings and previews next summer, everyone will get a full introduction as we start ramping up to the season. Thanks again to everyone who participated in this year’s competition, and to those who’ve read.

One hundred years after the sinking of the Titanic, another overblown, too-big-to-fail enterprise — the Philadelphia Eagles — is crashing and burning, and Andy Reid insists on bringing fantasy owners down with him. Case in point: On Wednesday, Reid announced that despite LeSean McCoy’s return to the starting lineup, he would employ the dreaded three-way split between McCoy, Bryce Brown, and Dion Lewis.

It didn’t have to end this way for the Eagles. Their skill position players were meant to carry fantasy teams to championships, not to the first overall pick in next year’s draft. But as Reid spends his final days in Philadelphia brooding like Captain Edward John Smith, owners of McCoy and Brown are left to fend for themselves.

McCoy must be started, but I’d feel queasy about him being my RB1. (ESPN’s experts have collectively deemed him the 20th-best running back this week.) On the other hand, I wouldn’t touch Brown with a 10-foot pole. If you’re reading this, you’ve probably qualified for the championship, which means that your team is at least somewhat good. Logic dictates that you should have better FLEX options on your roster than Brown, and I strongly recommend using them.

Peyton Manning and Eric Decker vs. the Browns
As a founding father of the Brandon Weeden fan club, it pains me to admit that Kirk Cousins was the best quarterback on the field during Sunday’s Redskins-Browns game. If Cousins could carve up Cleveland’s defense, I don’t want to imagine the variety of horrific things Peyton Manning will do to it. Demaryius Thomas is obviously a must-start, but I prefer Eric Decker here solely because of Thomas’s difficult matchup with Joe Haden.

Reggie Bush vs. the Bills
Bush has been an enigma in 2012, torturing owners with his erratic week-to-week swings. Nevertheless, Daniel Thomas has been placed on IR, and Bush should fare well at home against the Bills, who’ve given up the most rushing touchdowns (22) in the NFL.

Every member of the Cowboys’ offense vs. the Saints
Even with last week’s shutout of the Bucs, the Saints still rank last in total defense, surrendering a whopping 433.3 yards per game. By contrast, the 31st-ranked Jaguars, who give up a measly 394.1 yards per game, seem like the Steel Curtain. Meanwhile, a Cowboys offense that struggled for much of the season is finally coming together. Count on big performances from Tony Romo, Demarco Murray, Dez Bryant, Miles Austin, Jason Witten, and, yes, even fullback Lawrence Vickers.

The Bears’ defense vs. Ryan Lindley
Through Week 9, Chicago’s defense was scoring an unprecedented 17.6 fantasy points per game. Who can forget those days when Peanut Tillman pulled off strip-and-scores with relative ease, Brian Urlacher was a healthy, run-stuffing god, and Lovie Smith possessed impeccable job security? Since then, the Bears have regressed below the mean, hitting rock bottom against the Seahawks in a -1 point effort. This is all to say that Ryan Lindley and his 8:0 turnover-to-touchdown ratio is exactly what the doctor ordered for these very hungry Monsters of the Midway.

Cecil Shorts vs. the Patriots
Six receptions for 101 yards is substantially more than I thought we’d get out of Cecil Shorts last week as he returned from a concussion. The Jags will be playing catch-up for most of this game, and owners of Shorts and Justin Blackmon will benefit greatly.

I’m a sucker for these lists, and, admit it, you are, too. Without further ado, I present the best (and worst) of fantasy football in 2012:

Worst Draft Day Strategy: Selecting Gronk or Jimmy Graham in the first round