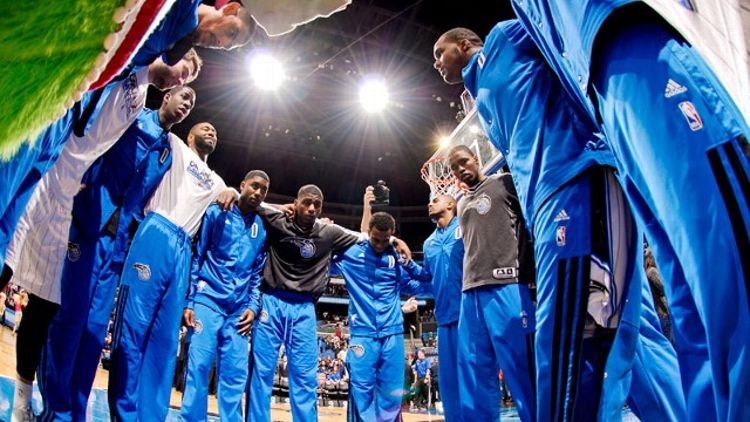 Even the harshest critics of the return Orlando got in the Dwight Howard deal had to concede this: The Magic’s own horrid play would land them at least one really good shot at the no. 1 pick, the most valuable commodity in the sport. Even if the mid-tier players and mid-tier picks the Magic received from Denver and Philadelphia didn’t work out as hoped, they’d at least have their own stockpile of lottery deliciousness.

But after a 5-10 start that featured some ugly blowouts and a key injury to Jameer Nelson, the Magic have moved to 12-13 and injected themselves into the playoff race. John Hollinger gives the Magic a 71 percent chance of snagging a playoff spot, even though a relatively easy early-season schedule has helped fuel this solid start. It’s a fair question now: Could the Magic actually make the playoffs? Three trends suggest it might not be so crazy, even if executives and scouts around the league are almost universally skeptical — for reasons both of talent and motivation as we approach the trade deadline.

• Orlando’s own fantastic defense. The Magic, having lost Dwight Howard and a defensive mastermind coach in Stan Van Gundy, rank sixth in points allowed per possession. Each member of of last year’s top-10 overall in that category made the postseason, and 91 of 100 such teams did so in the last 10 seasons. It’s very hard to miss the playoffs with a top-10 defense.

They’ve been even better since getting Nelson back, re-jiggering their rotation, and getting better minutes from Nikola Vucevic, Gustavo Ayon, and some other unheralded pieces; over their last 10 games, the Magic have given up just 95.2 points per 100 possessions, a mark that would top the league for the season.

“We’ve already won 12 games,” says J.J. Redick, “I don’t think a lot of people would have predicted that. It’s always a little fun to beat expectations.” Arron Afflalo, a new piece from Denver, says Vaughn’s emphasis on D has been clear: “The focus in Denver was to run teams into the ground,” he says. “Here, we’re a little more detail-oriented as to how to get stops on defense.”

Vaughn has introduced some tweaks to account for Howard’s absence and the team’s revamped roster, Redick says. We’ll get to that stuff shortly. But if there’s a mistake the NBA analyst community made in assessing this Magic team, it was probably forgetting the difference between a sub-par talent team stocked with tough-minded veterans and a sub-par talent team giving heavy minutes to rookies and second-year guys.

• The Sixers’ tailspin. Philadelphia is 12-14 and has lost five straight, and it’ll only get worse if they don’t get Jrue Holiday and Evan Turner back soon (not to mention the other center in the Howard deal). Even counting Philly’s semi-tough five-game stretch of losses, the Sixers have still played the second-easiest schedule in the league, in terms of opponents’ winning percentage, and they’ve played 15 of their first 26 at home. They’re about to start a brutal 10-game stretch that includes an eight-game road trip. If their health doesn’t turn soon, they could easily be sitting at something like 15-21 or 14-22 after that stretch.

Orlando has its own injury issues, with Glen Davis out with a shoulder strain. Davis is having a really interesting season. He’s shooting 45 percent on a whopping 16 attempts per 36 minutes, and most of those attempts are relatively low-efficiency mid-range shots and tricky floaters/hooks from the post. He doesn’t get to the line nearly as often as a high-usage player should. And yet Orlando has very few players capable of creating any offense on their own, let alone drawing the occasional help defender. Only about 6.5 percent of Orlando’s possessions end in isolation plays, the second-lowest figure in the league, according to Synergy Sports.

It’s unclear where Davis’s 15 shots per game are going to go. Jameer Nelson is confident a sampling of guys can take two or three of them each. “It’s unfortunate Glen is out,” Nelson says, “but it’s an opportunity for other guys. Josh [McRoberts], Gustavo [Ayon] and Andrew [Nicholson] have all been great for us.” (An aside for lineup geeks: Nelson says it was surprising to McRoberts and the team in general when Vaughn began using McRoberts occasionally at small forward. “I joked with him about it,” Nelson says. “We all did: ‘Dude, you’re playing the three!’ He didn’t know what to do at that spot. But now he does, and it’s almost like he doesn’t know what to do at [power forward] or [center] anymore.”)

• The mediocrity of the Eastern Conference. Only Miami, New York, and Atlanta have really separated themselves. Chicago is close, at 14-10, and a point differential almost identical to Atlanta’s, but the rest of the bunch — Milwaukee, Boston, Indiana, Brooklyn — are all right around .500. They’ve all had their own injury issues, some of which (Danny Granger, Derrick Rose) will resolve themselves, but they’re also all in a place where another injury could spell disaster.

So should we really believe in the Magic, this alleged also-ran everyone thought would be banking on its own ineptitude? There are some strikes against the potential sustainability of this start. The offense has been bad, with no sign of being able to produce efficient looks. Orlando is tied for 27th in points per possession, and though they’ve been better lately, it’ll be hard for them to push their ceiling up without getting some easier points. Those top-10 defenses that missed the playoffs all did so while supporting one of the three or four worst offenses in the league.

Every point is work for the Magic — all hard screening and furious cutting, especially around the elbow areas, until something finally comes open. “You have to be in shape to play for us,” says Nelson. “We are all used to running as hard as we can all the time.” The system has so much movement, Nelson says, the Magic players have agreed that asking out due to fatigue is an acceptable part of the process, and not a sign of weakness.

All that motion has produced a ton of mid-range jumpers and very few high-value looks — free throws, layups, and 3’s. The Magic are on pace for one of the half-dozen lowest free-throw attempt rates in league history, and the 3-happy system of the Van Gundy era is totally gone. The lack of foul shots isn’t a concern yet, Nelson says. “We haven’t talked about it. We’re not going to try and get a bunch of layups just to draw fouls. That’s just not the way we play.”

The lack of 3’s would seem to suggest that Vaughn has totally overhauled what Van Gundy built. But that’s not at all what’s happened. The Magic, in fact, play almost exactly as you’d expect a Van Gundy team to play if you took away the most important ingredient — a dominant pick-and-roll center and defensive beast — and added a touch of Gregg Popovich stuff. Van Gundy had borrowed some of his tenets from Popovich, anyway.

The Magic, for instance, always ranked near the bottom of the league in isolation plays under Van Gundy, and many of those motion sets centered on picks at the elbow were staples of his system. It’s just that the Magic lean on them more now, without Howard’s pick-and-roll game and post-up work to open up the floor for an army of spot-up shooters. “Even a lot of my 3’s come off the dribble now,” Redick says. They didn’t get out on the break much under Van Gundy or draw many foul shots — even with Howard — and they still don’t.

The Magic in the last couple of weeks have re-introduced some high pick-and-roll sets for Nelson, and they’ll add more of that when Hedo Turkoglu (a ball handler) and Al Harrington (that precious floor-spacing power forward) return from injury, Redick says. The Magic also only have one heavy-minutes unit that’s been productive on both sides of the floor — the starting lineup, but with Redick in place of Moe Harkless. That lineup has been one of the league’s very best, but Davis, a key ingredient because of his scoring and screening, is out for four to six weeks.

The same style of adaptation applies on defense. The Magic under Van Gundy prioritized defensive rebounding, and they rarely forced turnovers, because Van Gundy hated gambling for steals. He preferred his guys stay in front of their men and force mid-range shots.

Guess what? The Magic are no. 3 in defensive rebounding rate, and only three teams force turnovers less often. The flip side: The Magic give up a below-average number of shots at the rim, and only about a half-dozen teams coax opponents into more mid-range jumpers. “The hardest shot in the league is a contested two-point jumper,” Nelson says. “And we are forcing teams to take a lot of those.”

That’s in part because Vaughn has adjusted the team’s base defense to account for Howard’s absence. Van Gundy had his guards almost always chase opposing ball handlers over screens on pick-and-rolls, since going under them would yield an open 3-pointer. That strategy had the downside of allowing those point guards to build up some speed with their defender behind them, but Howard was always around to deter penetration.

He’s not anymore, and so Vaughn has adjusted to stop penetration at all costs. Guards have permission to go under picks now in some matchups, and other players are free to help on penetration, even if it means leaving an outside shooter open in the mid-range area. “Jacque’s main point is ball containment,” Redick says. “We are living with those long 2’s.” Adds Nelson: “We don’t have that dominant shot-blocker anymore, so we have to contain the ball.”

Can this continue? Maybe. Orlando’s opponents aren’t shooting an unsustainably low percentage at the rim or from the mid-range, but their collective 32 percent mark from deep — second-lowest in the league — is likely to come up. Opponents have hit just 28 percent from the corner, second-worst in the league, so Orlando is probably due an unfriendly hot streak from there. Ditto for free throws, on which opponents have shot a league-worst 71 percent — misses that would seem to owe nothing to Orlando’s defense. The difference between 71 percent and the league average from the line (about 75.5 percent) probably accounts for one of Orlando’s wins in the big (statistical) picture.

The bigger question, of course, goes back to those tantalizing ping-pong balls: Does Orlando even want to make the playoffs? Rob Hennigan, the team’s GM, declined comment for this post, and the players all insist there’s nothing they can do about the trade deadline. Redick and his expiring contract will be a prime asset for teams in need of shooting and secondary play-making, and the Magic have some other cheap pieces — Ayon, McRoberts — that might draw interest. “I can’t be concerned about it,” Nelson says. “It’s a business.” (He has the same attitude toward the Howard trade, even if he concedes Howard “probably could have handled it better.” Nelson says Orlando’s fans seemed to care more about their stirring road win over the Lakers than the Magic players did. “Man, even today, at my daughter’s Christmas party, I had five or six people congratulate me on that game,” he says with a laugh. “They didn’t even ask me about last night’s game.”)

Afflalo doesn’t even want to hear it: “You play to make the playoffs, and once you’re in, you play to win the whole thing.”

Rival executives are eyeing the Magic carefully, and most expect them to be sellers at the trade deadline. That, plus the stagnating offense, makes a playoff berth unlikely. But that doesn’t detract from what this team has accomplished nearly a third of the way into the season.

The Year in Eli Manning