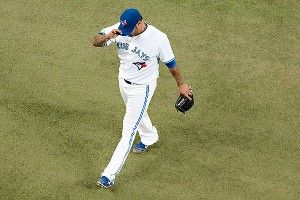 CC Sabathia serves up a grand slam in the first inning of his first start. Joey Votto’s hitting a buck-fifty-four through four games. For fantasy players, these are minor annoyances. Sabathia’s probably going to be a top starter again this year, and Votto’s probably going to contend for an MVP. These kinds of ugly performances by blue-chip players in the first week of the season will likely be long forgotten by Game 162.

The same cannot be said for closers. If you see a ninth-inning guy not making gobs of money melt down in spectacular fashion, even this early in the season, your radar should go up. Not because their health or skills are necessarily compromised. But because the closer role is almost completely arbitrary. (St. Mariano excepted.)

Last week, we discussed the destructive nature of saves and managers’ obsession with managing to the save rule. When a closer starts blowing saves, it certainly hurts a team. But it’s also a gigantic logistical pain in the ass for managers. They’re already second-guessed constantly. When a closer starts costing his team games, that pressure ramps up 10-fold. They can’t (and shouldn’t) bench the cleanup hitter for an 0-for-12 streak or the staff ace for a couple of bad starts. But they can (and will) demote a closer after a few blown saves, especially when the guy’s not making big bucks.

In a minute, we’ll run down some of the most tenuous closer situations, based on each closer’s early-season struggles, lack of experience at the job, and smallish contract, with suggestions for whom to add to your roster or try to acquire.

But let’s turn this around first. If you’re fortunate enough to own multiple closers, you should be shopping them hard right now. Don’t just offer any closer either. Say you own Mariano Rivera, J.J. Putz, and Rafael Betancourt in a fairly shallow league. All three have the potential to have big years with 35-plus saves. But the owner in your league who has Andrew Bailey and Sergio Santos is pissed off right now, scared his attempt to draft 70 saves will end with nearly zero, due to injuries and ineffectiveness. He might get anxious about Putz’s periodic injury history, or Betancourt being nearly 37 years old with limited closing experience, his excellent peripherals be damned. In that scenario, Rivera’s the guy to shop, the savior offering a rock-solid option to your leaguemate in need.

Hell, even if Rivera’s your only closer, he’s worth marketing right now. Yes, managers’ capriciousness when it comes to handling save situations means you can’t be sure the lesser closer(s) you pick on waivers or via trade will come through all year long. But this is simply a matter of arbitrage. An unimpeachable closer like Rivera might fetch more right now in trade than he will at any point this season; you might land a legitimate slugger or staff ace for him if you hustle. Turning around and trading for Alfredo Aceves, on the other hand, might cost you a bag of beans, even after Aceves notched his first save (and first out) of the season Monday night. The gap between the two closers’ trade value is enormous. Yet there’s a decent chance Aceves finishes not far behind Rivera in saves this year. Exploit those gaps between perceived and actual value often enough and you’ll crush your fantasy league.

Two blown saves in four games so far for Santos. Monday night’s debacle started with a Dustin Pedroia double (happens to the best of ’em), followed by a pair of walks and a Ryan Sweeney single to give Boston the lead (not so much). The Jays traded a solid pitching prospect to get Santos from the White Sox, with an attractive long-term deal attached to their new ninth-inning guy. But Cordero’s second on the active saves list with 327 and saved 37 games as recently as last season. See if Cordero’s available in standard 10- or 12-team mixed leagues. If he’s not (or you’re in a deeper league), see if you can get him as a throw-in to a bigger deal.

Aceves didn’t just lock down the save in Toronto Monday night, he retired the Jays 1-2-3 in the ninth to do it. Bobby Valentine’s new to the manager’s job in Boston but already seems to have chosen some favorites (and non-favorites). To wit: Mark Melancon actually saved 20 games for Houston last year, but might not be the guy if Aceves falters. The starting rotation’s too thin and the Sox have invested too much energy prepping Bard for the fifth starter’s job, so that doesn’t seem likely either. Boston could always go outside the organization for pitching help. The hunch here, though, is that Aceves will get some rope now that he’s got a save in his pocket. It might seem unlikely now, but Aceves could end the year with 30 saves.

Like Valentine, Robin Ventura’s new to the manager’s job on the South Side, and thus not beholden to the biases of his predecessor. The skipper likes Santiago’s screwball and isn’t sweating having a lefty in the closer spot, rare though that may be. I’d still want to own Thornton and Reed, though, both for save potential and for the value they’d bring as 70-inning setup men in deeper leagues. Reed especially is a strikeout machine who could rack up 80-90 whiffs to go with low ratios, even if he never sniffs the closer role.

Rodney notched back-to-back one-out saves against the Yankees over the weekend, but he’s hardly ensconced as the new closer with Farnsworth out. The fact that Farnsworth’s still fighting the same elbow injury that caused him to miss ample time last fall should make you wonder if he’ll miss more than the four to six weeks the Rays are saying. Maddon will likely play matchups with Howell and/or McGee against lefty-laden ninth-inning lineups. Rodney could get a bunch of save chances, but he has a history of lousy command that might trump his excellent hat-wearing skills. Meanwhile, Peralta earned Joe Maddon’s trust both as a setup man and fill-in closer last year, and Rodney has yet to enter a game in a traditional save situation, up one to three runs, bases empty, starting the ninth. If Peralta’s available, I’d grab him while no one’s looking at him.

Everyone and their dog shorted Johnson’s chances in fantasy drafts this spring, figuring he lacks the strikeout rate (5.8 K per 9 innings) and the closer’s pedigree (just 23 career saves) to hold the closer’s job for long. Valid arguments both, but there comes a point at which doubt is so high, you want to go against the grain and take the supposedly shaky guy. Johnson’s already got a couple saves to his credit, so trading for him might’ve been easier a few days ago. Still worth inquiring to see if he can be had cheap; specing on Kevin Gregg isn’t what you’d call a high-upside play.

Lidge has the long track record (sixth among active saves munchers) and the slider that still slides, as he showed in banking an early save against the Cubs. Rodriguez has the heater (average fastball velocity above 98 mph) and one successful save chance of his own in which he struck out the side. Incumbent closer Drew Storen’s headed to see Dr. James Andrews, so the winner of the Lidge/Rodriguez battle could be a huge add. It’s just damn near impossible to know who has the upper hand for saves right now. If you could have either guy you’d want Rodriguez for his raw skills and massive strikeout potential, but both pitchers are almost certainly owned already in your league. The contrarian play is to see if Storen’s owner dropped him as soon as he heard the words “Dr. James Andrews.” If his injury proves to be less severe than expected, Storen’s a great stash — doubly so in leagues that have DL slots.

Holland was a top-10 MLB reliever by virtually any metric other than saves. But the Royals signed Broxton to a one-year deal as Joakim Soria insurance, hoping the once-dominant Dodgers closer would regain his blazing fastball. He has, and Broxton pulled a Rodriguez in making his first save chance of the season a strike-out-the-side affair. But here’s why you should pick up Holland, or keep him if you already own him: If the Royals fade out of the race as expected, a successful closer on a cheap, one-year deal becomes enormously attractive at the trade deadline, including for teams who’d convert him to a setup role. If Broxton goes, Holland becomes the favorite for two to three months of saves.

Quickies: Vinnie Pestano might have better stuff and better peripherals, but Chris Perez is the one making the (relatively) big bucks in the Indians bullpen, and the one with the history of saves. Assuming he’s now mostly over his spring injuries, he could rack up another 30-plus saves, ugly though they might be. … Carlos Marmol’s always been a roller coaster as the Cubs’ closer, posting gigantic strikeout rates but also walking the ballpark on off days (and sometimes during on days). Theo Epstein and Jed Hoyer would’ve surely loved to cash Marmol in for pieces that could contribute to the next winning Cubs team, but Jim Hendry’s largesse means Marmol’s owed an oppressive $16.8 million over the next two seasons. Marmol posting a loss and a blown save in his first two outings of the year wouldn’t help in that regard. He’s a volatile buy-low, but a buy-low nonetheless.