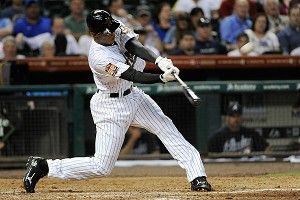 Welcome to Diamond Reflections, a video wrap-up of yesterday’s action in MLB. In this post, we talk baseball, share a few laughs, and watch some highlights. Our friends at MLB.com don’t allow embedding on recaps and highlights, so for now there are just links to the video. That will have to suffice until things get a little less hoard-y.

Fan of the Day

No contest — the Arlington Sprinkler, and a rare embed from our pals at MLB.

Monday’s best home run goes to Justin Maxwell, who did THIS in his first at-bat with the Astros.

Monday was more a day of the bat than the glove, but Oakland’s Josh Reddick had this inspiring throw to nail Jason Bourgeois at third.

Is clutch a real thing? Is it nonsense? Here’s some evidence for the former, courtesy of the Mets’ Daniel Murphy and Monday’s only walk-off hit.

Honorable mention: Ryan Sweeney’s go-ahead single puts the Red Sox in position for their first win of the season.

Who said Barry Zito was dead? The San Francisco lefty earned his first complete game shutout in nine years, throwing a four-hit gem against the Rockies.

Where to Watch Ozzie Guillen Apologize