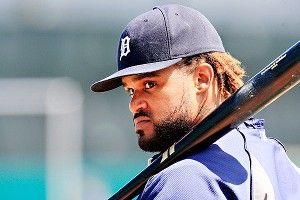 Like most 3-year-olds, I had a favorite toy. Carried it with me everywhere. Hugged it. Talked to it. Played with it. When I’d lose it, even for a second, I cried. When my mom would find it and give it back, I’d clutch it tightly, my world made whole again.

My favorite toy and I were inseparable. And why not? Just look at how awesome it was.

Under the heading “You know you’re a numbers nerd when,” walking around day and night with a Little Professor calculator has to rank near the top of the list. It’s with that spirit in mind — and a big hat tip to ESPN fantasy maestro Matthew Berry for the inspiration — that we unveil Grantland’s Fantasy Baseball Nerdy Keys to Victory. Leading up to Opening Day, we’ll run through some key statistical concepts that will make you better fantasy baseball players, and also more informed baseball fans. We’ll introduce more concepts periodically during the season, to ensure you’re managing your team the right way, without overreacting to hot and cold stretches, or missing the bigger picture.

We start today with the concept of regression to the mean — something you’ve heard about if you’ve ever read my Grantland colleague Bill Barnwell.

Six years after I got my Little Professor, my dad bought me a much weightier gift, literally and figuratively: the 1983 Bill James Baseball Abstract. Like all Bill James Abstracts (as I would discover when these became annual gifts), the ’83 version was stuffed full of eye-opening, counterintuitive ideas that changed the way my kid-sized brain watched baseball. The most enlightening and simplest concept was something James called the Plexiglas Principle — also known as The Whirlpool Principle, also known as regression to the mean.

The crux of Plexiglas is this: A team that improves in one season tends to decline the next, and vice versa. It was an easy idea to understand, but a tough one to believe. We human beings are hard-wired to hate randomness. So we look for patterns in everything. Thus a team that wins 75 games one year and 81 the next is perceived to be on the rise, destined for greater things. A team that slips from one season to the next is on its way down, headed for a stretch of lean years. Fans make this mistake, writers and prognosticators make this mistake … even MLB general managers make this mistake.

When the Seattle Mariners rose to 88 wins (from 78) in 2007, GM Bill Bavasi and his staff saw a team on the rise, one that might be a big trade or two away from postseason glory. So the M’s made those trades. The biggest one landed Erik Bedard, a talented left-handed starter who finished fifth in 2007’s AL Cy Young voting but also had some injury troubles in his past. The linchpin of the deal, Adam Jones, just enjoyed his best season, clubbing 25 homers and netting nearly three Wins Above Replacement as the Orioles’ starting center fielder. Meanwhile, Bedard threw just 81 innings in 2008 before injuries knocked him out for the rest of the year; he tossed just 83 innings the next year, then missed all of 2010, got dealt in a three-way trade for a fraction of what Seattle gave up to get him, and is now on his third team since leaving Baltimore. As poorly as the trade worked out for Seattle, it was the thought process behind it that was worse. Bavasi had ignored the Plexiglas Principle, believing his team was bound to keep improving, when in fact they were more likely to regress after winning 88 games. (The fact that they scored fewer runs than they allowed in ’07, pegging their true talent closer to 79 wins than 88, was something else Bavasi missed — the constant pressure placed on a GM to win or be fired might’ve played a role, too.)

But here’s the thing about the Plexiglas Principle: It works for players too. Which means it’s a valuable tool you should wield aggressively in your fantasy leagues.

To see how likely a player is to bounce the other way after a big change in performance, I enlisted the help of ESPN Stats & Information‘s brilliant and hard-working group of researchers. We looked at the 10 biggest year-to-year gainers and losers in both OPS and ERA for the 2008, 2009, and 2010 season among hitters and pitchers who garnered enough plate appearances and innings pitched to qualify for the batting average and ERA titles, then tracked how they performed the following year. (OPS and ERA are both flawed metrics in their own way; obviously you can perform this exercise with other stats too, be they advanced metrics like wOBA and FIP, or even just Triple Crown stats.) Here are the results:

Of the 10 biggest OPS losers in ’08, six improved in 2009. But the degree of improvement is more striking. Prince Fielder hit like an MVP candidate in 2007, dropped to mere above-average first baseman status in 2008, then hit like a possible MVP again in 2009. Robinson Cano dropped 126 OPS points, then surged 156 points the following year. Chone Figgins and Freddy Sanchez also saw big upticks in their performance after down years.

Of the 10 biggest OPS gainers in ’08, seven pulled back in 2009. That total’s slightly misleading, since several of these players didn’t budge much either way in year three of the sample. Still, Stephen Drew, Manny Ramirez, and Ian Kinsler all saw sizable pullbacks in 2009, while Aubrey Huff absolutely cratered after a big 2008 season (he then rebounded to play a key role in the Giants’ World Series win in 2010, before putting up sub-replacement numbers in 2011; don’t trust Aubrey Huff, kids).

The swings are even more dramatic on the pitching side. Dice-K put up a roughly league-average ERA in 2007, was elite in 2008, then threw batting practice in ’09. Scott Olsen, Jamie Moyer, Dave Bush, Kyle Lohse, and Derek Lowe also regressed badly after big improvements in ’08.

Did you know that three years before Justin Verlander hit the Cy Young/MVP daily double, he posted an ERA just under 5.00? OK, it’d be easy to predict a pitcher of Verlander’s talent to shake off that kind of result and rebound strongly. How about Javier Vazquez, Aaron Harang, Brian Bannister, or Ian Snell? (Granted, you probably wouldn’t have wanted to roster Bannister or Snell on your 2009 fantasy team either way.)

More of the same. Some of the best eye-catchers are Zack Greinke (love Greinke this year, but he’ll never again put up numbers like he did in 2009); Joe Mauer (ditto); Cole Hamels (the bad-luck bug ate him alive in ’09); Javier Vazquez again (pro tip if you ever find a time machine: back Javy on NL teams, stay away when he’s on AL teams, especially the Yankees); Kevin Millwood (still don’t know where that ’09 came from); and of course, the tantalizing Aubrey Huff.

Making these decisions for your team works best when the statistical fluctuations are random; if extenuating circumstances such as injuries exist, your leaguemates will know that too, and it’ll be tougher to gain an advantage. Still, I’m willing to bet that whoever drafted Ben Zobrist in your league in 2010 got a hellacious bargain. Yes, Zobrist’s injuries in ’09 were well known. But even the most disciplined fantasy player will have a tough time seeing a player fall 249 OPS points (plus 17 homers and 59 points of batting average) and not get scared off.

OK, all that history’s fine. Now we need some actionable numbers. Who were last year’s biggest gains and losers?

Werth stands out here, in that he didn’t have as miserable a season as many of the others on this list; he’s a good year-after pick this season. But to win fantasy leagues, sometimes you need to go ugly. Colby Rasmus collapses so badly that the Cardinals ship him to another nation? Yes. Carl Crawford instantly makes the Red Sox wonder if they can get a refund on their $142 million investment, and might start this year on the DL? Potential bargain.

Want to go uglier? In standard 10- or 12-team mixed leagues, who’s going to want Alex Rios after his apocalyptic 2011 performance? The answer is you. Rios’s teammate Adam Dunn didn’t garner enough plate appearances to make this list, but he might be represent the ultimate test of faith. What do you do with a player who racks up an .892 OPS, 38 homers, and 103 RBIs one year, then drops to .569 (!!!), 11, and 42 the next? Buy! Even if Rios and Dunn flame out, the cost of drafting them or buying them at auction should be so low that you can replace them and still feel fine about your team.

I’m not buying Aramis Ramirez in any league. Puts up big numbers while playing more than 125 games for the first time in three years, and turns 34 in June? Regression ahoy. I’ve been a Curtis Granderson fan since he first broke into the big leagues, but he’s pretty much a sure thing to come down after a sudden leap that saw him obliterate his career highs in homers (by 11), runs scored (by 24), and RBIs (by 45); draft him, but only if he falls to the second round.

I don’t want to get too far into it here, since I’ll be writing about the impact of team defense on a pitching staff another day. But suffice it to say I’m not buying Fister or Verlander (obviously a great pitcher, but not worth super-elite prices this year) due to both the Tigers’ horrific defense, and both pitchers’ huge improvements in 2011. Ricky Romero is a fine pitcher, but the combination of Plexiglas, Romero’s lack of killer peripheral stats (strikeout rate, walk rate, etc.), and the loaded Yankees and Red Sox lineups make him a stay-away pick, given likely asking price. That goes double for Joe Saunders, owner of the fourth-worst strikeout rate among all qualified starters in 2011.

Actually not a ton of potential values here: Myers is now a closer, Carmona has a different name and an uncertain future, and Hernandez deserves his King Felix nickname but was never going to sustain a low-2.00s ERA. The best bet in this bunch might be Ryan Dempster, a thoroughly unsexy pitcher toiling for a lousy team, but also someone who’s topped 200 innings for four straight years, and still struck out nearly a batter an inning last year at age 34; his true talent is considerably better than a near-5.00 ERA guy.

It’s certainly not a 100 percent certainty that a player rising or falling one year will do a 180-degree turn the next. But even among a smart group of friends or fantasy experts, the natural tendency is to be wary of a player who stunk last year, and to jump all over someone who surged to new heights. In the heat of a draft or auction especially, when lightning-quick reactions abound and cold-hearted preparation often gets replaced by gut instinct, your leaguemates are more likely to reject last year’s losers and go the extra buck for last year’s winners. They won’t have to time to consider that most stats in standard 5×5 fantasy leagues (saves, wins, runs scored, and RBIs, of course, but also batting average and ERA) can be highly variable, subject to everything from a manager’s whims to the quality of the lineup around you or the defense behind you.

Call this concept the Plexiglas Principle, regression to the mean, or anything else. Just make sure to use it to your advantage when you take a seat at the draft table.