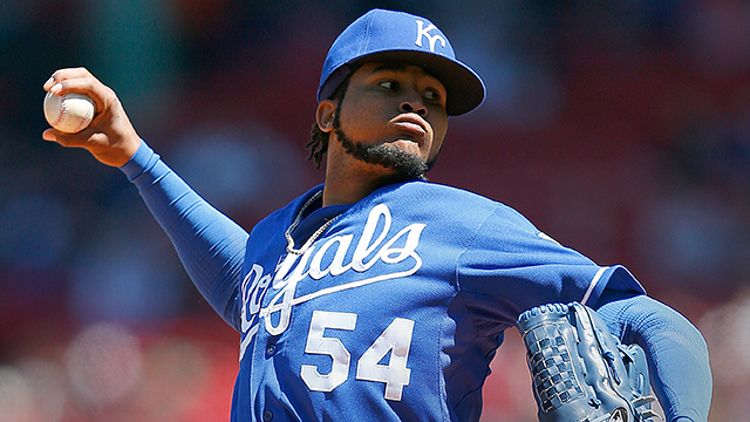 Lost in all of last year’s hoopla over Miguel Cabrera becoming the first player to win the Triple Crown in 45 years were the impressive numbers put up by the Angels’ Ervin Santana. Big Erv gave up 39 homers, the highest total of any pitcher in the majors. His 5.63 FIP was the single-worst mark for any of the league’s 88 qualified starters. To be fair, Santana didn’t quite pull off a Triple Crown the way Cabrera did: His 5.16 ERA was merely the fifth-worst mark for any full-time starting pitcher. So of course when the season ended, Kansas City Royals executives took one look at Santana’s near-historic season, considered his $13 million option for 2013, nodded to each other, and said what everyone was thinking: “We’ve gotta get some of that!”

Miraculously, trading a prospect and paying all but $1 million of Santana’s salary to acquire 2012’s worst pitcher has actually worked out. The 30-year-old right-hander has averaged more than seven innings per start, posting a 2.00 ERA and a 6-to-1 strikeout-to-walk rate, and ranking among the AL’s leaders in Wins Above Replacement. After a rough first start in which he struck out eight but also allowed three homers and four runs in six innings, Santana’s been nearly untouchable: 3-0, 1.20 ERA, 23 strikeouts, four walks, opponents’ batting line of .239/.271/.274. And while the Royals have ceded 19 runs in their last two games, they’re still the AL’s third-best run-prevention team. As April comes to a close, Santana and the most overhauled starting rotation in baseball have the Royals a half-game out of first place, vying for the team’s first playoff berth in 28 years.

To track how they got here, we need to start with Santana’s transformation. Which means it’s time to call in the esteemed analysis hounds at ESPN Stats & Info.

One of the biggest reasons for Santana’s horror show last year was his sky-high home-run-per-fly-ball rate. Nearly one out of every five fly balls that he gave up in 2012 went for home runs — 18.9 percent, to be precise, the highest mark for any qualified starter last season. A number that high requires a bit of bad luck. But if you’re throwing low-90s meatball fastballs all year long, they’re going to get hammered, and Santana’s fastball was the single-worst pitch thrown by any pitcher in 2012, per Fangraphs’ pitch values. That fastball, Santana’s Achilles’ heel for the past four seasons, has been more respectable this season: 58 percent of his fastballs have hit the strike zone this year, vs. 51 percent last season. In fact, Santana’s entire repertoire has been far less whackable in 2013. Of the 308 pitches Santana’s thrown to left-handed hitters this season, just one’s been hit for a home runs; last year, Santana tossed 1,583 pitches to lefties, with 23 of them leaving the yard. Timing matters, too. Santana hasn’t been completely impervious to gopher balls this year, giving up four in 36 innings. But just one of those came with men on base, vs. 17 multi-run shots out of 39 total in 2012.

But Santana’s go-to pitch, in good times and bad, has always been his slider. Never has that slider been as dominant as it is right now. He’s throwing it more often than ever before (41 percent of the time), his slider usage against lefties climbing to 37 percent from last year’s 31 percent. Santana’s slider has proved especially lethal this year as a two-strike pitch. ESPN Stats & Info tracks a stat called “non-competitive pitches,” basically obvious non-strikes. In 2012, Santana racked up 17 strikeouts on non-competitive sliders. This year, he’s already got nine.

Check out his whiffs of Dayan Viciedo, Gordon Beckham, Paul Konerko, and Tyler Flowers on April 3.

… and Will Middlebrooks on April 21.

Santana’s blazing start has highlighted a vast improvement in Kansas City’s pitching numbers compared to a year ago. The 2013 Royals own a strikeout-to-walk rate of exactly 3-to-1, following Monday’s 9-0 loss to the Indians, the sixth-best mark in the majors. Last year, Royals pitchers struck out 2.17 batters for every walk, ranking just 25th. Last April, KC’s strikeout-to-walk rate was just 1.67-to-1, the worst in all of baseball.

One of the best ways for a team to prevent runs is to ensure that the underbelly of the pitching staff — the long- and middle-relief corps — sees as little action as possible. To do that, you need your starters to go deep into games. Through Kansas City’s first 23 games this season, eight starts have lasted seven innings or more. That’s a pace of 56 for the season. The Royals have managed only 50 or more seven-inning starts once since 2000. Six of KC’s seven-inning starts have resulted in two runs allowed or fewer. That’s the 10th-best mark in the majors this year, compared to 28 such starts in 2012, which ranked 25th.

Of course, for fans of the team with the longest playoff drought of any team in the big four North American sports, one stat trumps all. Given the Royals’ adversity-laden history (especially since the mid-’80s), the team’s good-but-not-great 13-10 record still ranks way up there:

Most Royals Wins in First 23 Games

Can they keep it up? First we need to start with a big, fat sample-size caveat — we haven’t seen enough of Santana or any of his teammates to say with any degree of certainty what might happen over the next five months. No. 1 starter James Shields, acquired in the big offseason trade with the Rays, does offer a glimmer of hope for sustained success (23.2 percent strikeout rate, 6.5 percent walk rate, 3.09 ERA, 2.68 FIP through his first five starts), given his strong track record. But the rest of the rotation is still very much a crapshoot. Jeremy Guthrie, whose new three-year contract raised more eyebrows than paying Santana eight figures this year, owns a 3.06 ERA … but he also sports a 4.94 FIP (six homers allowed in 32⅓ innings) and an erratic track record, with last season alone divided between his 6.35 ERA in half a season with the Rockies and his 3.16 ERA upon landing in Kansas City. The wild card in the Rays deal, Wade Davis, tossed 12 combined scoreless innings against the Twins and Braves … but he’s been awful since, with 20 hits, seven walks, and 15 runs allowed over his past 8⅓ innings pitched. Fifth starter Luis Mendoza is … Luis Mendoza, a sometimes competent, sometimes lousy right-hander holding down a spot until better talent arrives.

The Royals boast multiple other strengths, from a bullpen full of flamethrowers to reliable lineup catalysts in Alex Gordon and Billy Butler to young breakout candidates like Alcides Escobar and Lorenzo Cain. But we still need to see if Danny Duffy and/or Felipe Paulino can come back from their injuries this summer, or if the Royals look outside the organization should the rotation need reinforcements. Will Eric Hosmer start hitting? Will Mike Moustakas start playing like someone who doesn’t belong in Triple-A? Kansas City might sit just a half-game back of first-place Detroit, but the loaded Tigers face far fewer question marks, given the state of the two teams’ rosters.

The same Royals team that pulled off a winning road trip against Atlanta, Detroit, and Boston just got pummeled in two straight games by the Indians. There’s a big gap between the 72 wins the Royals bagged last year and the 90-plus it’ll likely take to crash the postseason this year — the Shields trade alone was never going to be enough to bridge the divide. The agony this franchise can cause in a matter of weeks or months dates back to before many of the current Royals players were born.

For the suffering to end, they’re going to need big seasons from at least a couple of unlikely sources. Ervin Santana and his slider of death would be a great place to start.

The Bandwagon Fan's Guide to the NHL Playoffs