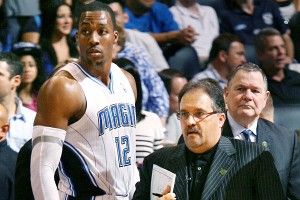 The reason LeBron James took such an L after he made The Decision wasn’t so much because of where he decided to play as it was about how he conducted himself while making the announcement. Simply put: It was corny. A faux-casual/faux-altruistic setting, a rigid line delivery that made it seem like he had been rehearsing all day in front of a mirror. The dorky phrasing about taking his talents to a beach. It all went wrong, all at once, and forever changed the way many people viewed the greatest player of his generation. It wasn’t that he was evil. It’s that he wasn’t cool.

This should come as no surprise to us. People who idolize superheroes like Dwight Howard does usually aren’t very good in dealing with the very un-comic-book-like real world.

Dwight Howard is not a cool dude. Dwight Howard does not have charisma. Dwight Howard doesn’t inspire. You can admire his physique, marvel at his defensive abilities, and play hypothetical games about making him your first pick if you were starting a franchise tomorrow. But this guy wears a cape and probably looks at Kazaam as a good career move. He was never really cool. And now he never will be.

Look at this guy. Howard has handled his image about as confidently as he put his arm around Magic coach Stan Van Gundy’s shoulder in that photo. He thinks we’re laughing with him, but we’re laughing at him.

After Thursday, though, I don’t think anyone is laughing anymore. I have rarely seen an athlete pull what Howard did during the Magic’s surreal 96-80 loss to the New York Knicks. At the end of the third quarter, Howard had two points and five turnovers. He finished with eight points. He sold out on screens, lagged on defense, and barely bothered in the post. Even if there was some extra layer to this story, even if Van Gundy is masterfully playing the press as well as Howard is mishandling them, Howard quit Thursday. It says more about him than any trade demand ever could.

Just look at the way the TNT panel of Shaq, Kenny, and Chuck turned on Dwight from before the Magic-Knicks game, to after. (OK, not Shaq, he still has a bull’s-eye on Van Gundy from Miami.) Before the game, it was all about Van Gundy committing the cardinal sin of airing dirty laundry in public. These guys are ex-players and they somewhat predictably protected their own.

After the game, it was a different story. They looked disgusted. They sounded confused.

I don’t know how things work in the NBA. But I do know about working in an office. And an NBA arena is just an office, except with expensive hot dogs and bright lights. And when you go into an office, you can complain about the boss all you like, but you don’t make your coworkers look bad. You just look worse in the end.

Like a teenager, Dwight Howard acted like not trying was cool, that not giving a shit would show us all how beyond this situation he is. If we’ve learned anything, it’s that this situation will never end. Dwight is not beyond it, he’s up to his ears in it.

And the more he worries about how good or bad he comes off in public, the more the public starts to see him for what he really is. He’s no superhero. He’s not even a good coworker.