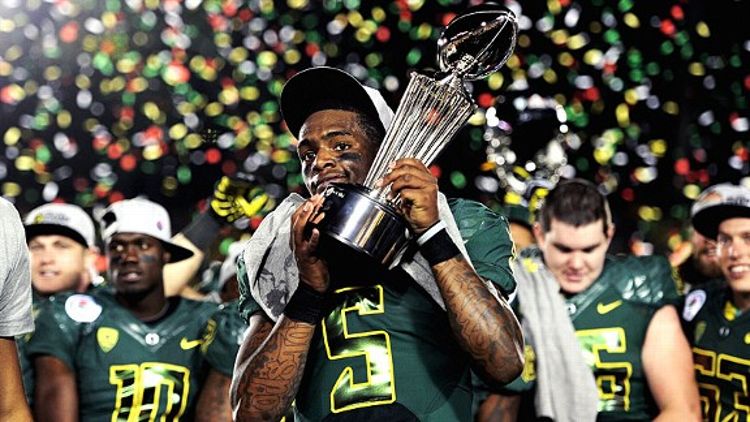 Whether you realize it or not, the gimmick’s dead. Oh sure, you’ll keep it up. You’ll run onto the field in your oblong stadium clad in some new, flashy fabric. You’ll keep building up facilities that make your athletic department look like a wooded Dubai. You’ll keep touting your corporate-funded, anti-tradition philosophy. But c’mon. It’s been 95 years since you’ve won the oldest, most patriarchal bowl of them all. It’s time to embrace your status. You might all be anarchists up in Eugene, but after knocking off a resilient Wisconsin team for the biggest victory in your school’s history, you are now among the elite and powerful.

Of course, this is exactly what Oregon has been gunning for all along; they would have gladly taken all of the Tostitos had Michael Dyer’s knee scraped the ground in Tempe last January. For all of their anti-establishment posturing, Oregon has always wanted the same things that every program wants: huge recruits, huge wins, huge dividends. But Oregon got to the mountaintop by insisting that another route was possible, one cleared of the intangible things on upon whose importance college football has always insisted. Now that they’ve won the Granddaddy, how are they going to tell their recruits that the way things have been done in the past aren’t good enough?

In the weeks leading up to their match-up with Wisconsin, the narrative practically wrote itself. Wisconsin was the old guard, a power-running team coached by a buzz-cut Midwesterner and supported by a fanbase that still gets jacked up by “Jump Around” and the Motion W. It almost seemed like Adidas begged the Badgers to let them design a new uniform for the Rose Bowl. That the rose-shadowed numbers they wore last night looked like they were designed by Russell Stover seemed depressingly appropriate.

But on the field, Wisconsin and Oregon played nearly identical games. For all of the conservative/progressive binaries that were touted pregame, the two teams’ offensive schemes were nearly identical. Both were centered around their Heisman-finalist feature back, both quarterbacks rolled out effectively and tossed impossible deep-balls off of their back feet. Neither team felt like playing defense until late in the second half.

Montee Ball finished with 164 yards on the ground, only five more than LaMichael James, while Russell Wilson and Darron Thomas finished with nearly identical stats. De’Anthony Thomas was able to do pretty much whatever he wanted against a hard-working Wisconsin defense, while Oregon couldn’t do anything to stop Jared Abbrederis from stringing together 320 all-purpose yards on the night. When Wilson spiked the ball on the Oregon 25-yard-line with no time remaining, it might just as well have been Thomas out there, throwing his arms out in frustration while the field exploded into red and white around him.

For their part, Wisconsin played like champions all year, and tonight was no exception. Throughout 2011, an air of quiet confidence hung around the Badgers. They were like a movie team, banded together and ready to overcome adversity. Wilson was the last-minute blue-chipper, the transfer student who was game to being hazed with the freshman after arriving in Madison earlier this year. Ball was the returning all-star, poised to finally get his big break. Even the two losses they took seemed scripted — hail marys on consecutive weeks? Anyone who didn’t think they’d win the B1G Championship Game in thrilling fashion needs to crack the cellophane on their DVD of Friday Night Lights.

And yet, the story ended in heartbreak for Wisconsin at the Rose Bowl. In any other year, in any other movie, just getting to Pasadena would have been a major accomplishment in itself; though its importance has been slightly reduced by the travelling National Championship Game format, the Rose Bowl is still the Rose Bowl. For Wisconsin, though, it must have been nearly impossible to see it as anything but a consolation, and in the end, even consolation kept its 25-yard distance.

One presumes that Oregon fans have, by this time, grown accustomed to superficial changes in their program’s identity. And while it’s been equal-parts thrilling and philosophically confusing to watch the Ducks rise to prominence over the past decade, the wait for any real, tangible change — the kind of change you can print on a T-shirt and see in a trophy case — has to have been excruciating. It’s tempting to think of the Oregon image as a mirage, but it’s always been more of a promise: if you wait long enough, the way things are will finally match the way they look. In other words, and despite what they’ve tried to tell us, Oregon has been a normal football team all along. They have linebackers and punting formations. They have American flag stickers on their helmets. And now they have the kind of hardware that comes with getting something they’ve always wanted.