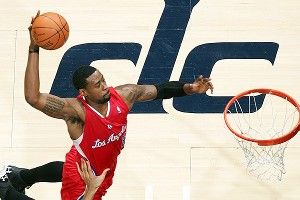 Apparently. We’re going to go a little The Man Who Shot Liberty Valance here and print the legend, because the legend is so good you should make it the new bedtime story that you tell your kids. In fact, I don’t even want to know if this is true or not; that’s how bad I want to believe it.

Here’s how it goes: Once upon a time (Saturday), the Clippers played the Wizards. The Clippers won by a boatload, but that’s not important. There were lots of dunks. So many it’s hard to count. But one dunk stood out from all the rest. The Clippers’ DeAndre Jordan dunked on JaVale McGee and then, according to Wizards Extreme, HE STARED DOWN MCGEE’S MOM, PAMELA. IN THE CROWD.

I looked through the archived broadcast of the game and could see no visual evidence of DeAndre ice-grilling McGee’s mom. BUT THAT DOESN’T MEAN IT DIDN’T HAPPEN. I went all the way to Loch Ness and didn’t see any monster; doesn’t mean I’m about to swim up in there!

Also, it’s not that we wish any public embarrassment on Pamela (or JaVale!) McGee, it’s just that (1) this is the funniest thing that’s happened so far to a very, very amusing Wizards team, and (2) it keeps Pamela “My son is the future of the NBA” McGee in the news.