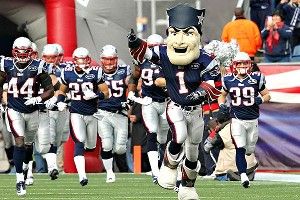 Something strange is happening in the NFL, and it’s about time someone had the courage to speak up. The results of recent playoff and Super Bowl games reveal a deep anti-animal agenda that is frankly alarming in this supposedly “enlightened” age.

Serious accusations deserve some serious facts, and I’m ready to be the Edward R. Murrow of the NFL’s emerging anti-animal controversy.

B. Of this group, 16 have human nicknames.* Fifteen have animal nicknames.** One has a nickname that is neither animal nor human.***

*The Giants and Titans belong to this category. Are they human? Debatable. Are they human-based? Yes. Ditto for the Saints. You can’t be canonized until you’re dead, and thus no longer technically human, but they’re still conceived in our image.

***The Jets. Unless they’re named for the American gang in West Side Story, which seems unlikely.

C. In the past five years, no team with an animal nickname has won the Super Bowl. The odds against this are astronomical. There’s only a 3 percent chance it would happen, given a random sample. And that random sample wouldn’t include men like Peyton Manning.

D. In that same time period, only two animal teams even reached the Super Bowl. They both lost. One, the Arizona Cardinals, lost in mysterious last-minute fashion, and the Saints resorted to trickery to beat the Colts. Both results are more than a little suspicious.

E. In the 32 playoff games pitting an animal team against a nonanimal team, the nonanimals are 20-12. Again, the success rate is unrealistic for a random sample. If you’re looking at the real world, on the other hand, humans are typically far more successful than animals, a few shark attacks aside.

F. Of the 20 teams to make the championship round in the past five years, only six had animal nicknames. In his time as commissioner, Roger Goodell has not addressed this disparity even once. But perhaps the media is to blame for not holding him accountable. Go ahead, try to find another story about this. Nothing’s out there. It’s like we’re all complicit in the scandal.

G. However, when you look at all the teams that have made the playoffs over that span, the edge is only 31-27 for the human teams over the animals, which is what you’d expect based on the makeup of the league.

H. Therefore, we can conclude that teams with animal nicknames are faring poorly in the playoffs, to a degree that can’t be explained by mere chance and can only be part of a larger conspiracy.

So what’s happening, and why? How can we explain this phenomenon? In 2007, I studied the data and found that there was a distinct neo-Luddite strain running through the NFL playoffs. In other words, the bias was against humans and against technology. Now, something else seems to be true. Teams with human-based nicknames are enjoying great success at the expense of their animal brethren.

Has the NFL gone too far? Should Goodell have to answer to the mounting evidence of an anti-animal agenda? Should humans take precedence over animals? Should we sweep this under the rug and call it the natural order? Or should the league take steps to ensure parity? Also, what does PETA think?

Stay tuned. I have a feeling this is only the beginning of what will become a very explosive issue. Good night, and good luck.