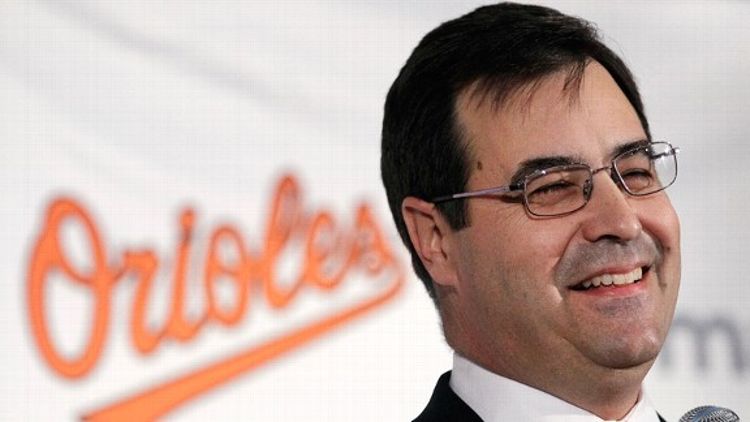 Dan Duquette is back in the big leagues, after nearly a decade away from the game. His mission: Turn around an Orioles team that hasn’t had a winning season in 14 years, and do it going head-to-head with the two superpowers of baseball, plus two of the best-run franchises in the game. Good luck with that.

Despite those overwhelming odds, Duquette is upbeat when you talk to him about his new role as GM of the Orioles. He was eager to take on a rebuilding project, feeling that would play best to his strengths. In his interview with the O’s, Duquette said he stressed an element of his resume that few other major league executives could match.

“I had operated a major league team in a small market, and one in a large market,” he said in an interview from his new office in Baltimore. “Only a handful of execs had done that. Both times, we had to create an infrastructure to increase our talent base. We did that successfully in Montreal, where they became one of the top two or three teams in terms of producing big league players from the amateur level. The Red Sox were in the bottom three in doing that when I got there; when I left they were top five.”

Rebuilding a farm system and shepherding draft picks all the way to the majors can take years, and many owners aren’t willing to exercise that kind of patience. Few have shown less patience in the past two decades than Orioles owner Peter Angelos. Here’s how long each of Duquette’s predecessors lasted as GM (or co-GM): four years, five years, three years, two years, one year, two years. The last Orioles general manager to survive more than half a decade at the job was Roland Hemond, who took the reins way back in 1988. The O’s might hold the 4th overall pick in next summer’s amateur draft. But there’s a real threat that Angelos could get antsy before that player ever sniffs the majors.

Maybe we shouldn’t blame Angelos. Since winning 98 games and the AL East title in 1997, the Orioles have put up some truly miserable seasons, racking up a slew of high draft picks — 10 top-10 picks in the past 11 drafts. But merely owning high picks isn’t enough, and the Orioles are living proof. Of the past 10 major leaguers drafted by the O’s, only Matt Wieters currently projects as an impact player. The second-most successful name on that list might be David Hernandez, a fairly promising starting pitching prospect back in the day who couldn’t get major leaguers out, then finally found his way as an excellent set-up man … in Arizona. The Orioles’ biggest problem has been developing quality big-league starters. Once-elite pitching prospects such as Brian Matusz, Chris Tillman and Jake Arrieta have seen their development stall, with injuries, ineffectiveness, loss of velocity, or all of the above stunting their growth. With the Orioles system having this much trouble bringing up capable major leaguers, and trading for top prospects not working either, Angelos’ itchy trigger finger starts to make more sense.

Duquette’s track record offers hope for better results. From 1988 through 1993, he served as director of player development, assistant GM, then GM of the Montreal Expos. During that time, the Expos molded several top prospects into major league All-Stars, including Larry Walker and Marquis Grissom, while also signing next-generation stars, including Vladimir Guerrero. Duquette developed a knack for acquiring young big leaguers just before their careers took off. He traded for Pedro Martinez, John Wetteland, Ken Hill, and Darrin Fletcher, all of whom became key players on the 1994 Expos, the best team Montreal ever fielded, and the best team in baseball before the labor stoppage erased the rest of the regular season, the playoffs, and the World Series.

He’d been immersed in the game for years leading up to that point, though, working his way up the Brewers organization for seven years before landing in Montreal. How can Duquette repeat that success in Baltimore, having last held a major league front office job in 2002, right before new Red Sox ownership fired him as GM?

Between 2002 and his hire in Baltimore, Duquette tackled a series of gigs that he says helped him stay sharp in the areas of scouting and player development. He started a youth sports academy in Western Massachusetts and also oversaw a summer league which has produced a number of players drafted by big league clubs, including Indians pitcher Frank Herrmann and promising Red Sox minor league outfielder Alex Hassan. He also helped launch the Israel Baseball League, recruiting players from around the world and placing several in professional baseball, including successful Japanese league pitcher Maximo Nelson. Between those experiences, his old contacts within the game and the Orioles existing personnel, Duquette says he’s confident he’ll have a firm grasp on his own personnel, and that of the 29 other teams, soon enough.

How much latitude he’ll have remains an open question. Long-time scout and executive Tony LaCava was another top candidate for the Orioles GM job. But reports circulated that LaCava wouldn’t be allowed the freedom he wanted to hire and especially fire whomever he saw fit, given the organization’s loyalty to several long-time employees. Meanwhile Angelos and Orioles manager Buck Showalter are two of the most involved, influential people in the game in their respective positions, raising questions about Duquette’s ability to command full authority. Duquette shrugs off those concerns.

“There are only 30 of these jobs, and every single job has its unique challenges,” he said. “I have a sense of Peter Angelos’ commitment to winning. Buck Showalter’s experience in managing, and his interest and capability in organization building, both in Arizona and in our mutual understanding and appreciation of the way Yankees do things, were big reasons why I took the job.”

Few GM jobs offer more unique challenges than Duquette’s most recent one, in Boston. Though his career there came to an ignominious end after new ownership stepped in, Duquette made and oversaw a series of shrewd moves in his eight years with the Red Sox. He raided the scrap heap, scooping up bargains such as Troy O’Leary and Brian Daubach, continuing his tradition of unearthing cheap talent that landed solid lefty starter Jeff Fassero as a six-year minor league free agent for the Expos. He dealt Adam Everett and a pitching prospect who never reached the majors for Carl Everett, right before Everett’s career year. He flipped closer Heathcliff Slocumb for Derek Lowe and Jason Varitek, one of the biggest steals in franchise history. Most famously, he parlayed pitching prospects Carl Pavano and Tony Armas Jr. into yet another trade for Pedro Martinez, which preceded (arguably) the most dominant peak for any pitcher in baseball history.

But there were plenty of whiffs too. He traded away Jamie Moyer, then watched the crafty lefty turn into a 267-game winner. A multi-year contract for Jose Offerman proved to be a huge flop. Most infamously, he let Roger Clemens leave for Toronto, saying afterwards, “we had hoped to keep him in Boston during the twilight of his career.” Perhaps Duquette couldn’t be blamed for jettisoning a soft-tossing lefty with only one 3-WAR season on his resume, or for punting on a once-legendary starter whose performance had atrophied, only to see it later skyrocket under … let’s say, extenuating circumstances. But Duquette earned a reputation as stand-offish while at the helm, steadily losing favor with Boston’s demanding media corps and thus blocking the forgiveness that might have been granted to a kinder, gentler, more media-cuddly GM. Thus the man who acquired Pedro, Wakefield, Manny, Damon, Lowe, Varitek, Youkilis, and Lester — the foundation of the 2004 championship team and even the beginnings of the 2007 club — ended up with a more negative reputation than he probably deserved.

Being more approachable and inviting with the media is on his Baltimore to-do list, Duquette says, even if it’s still below the more germane task of building a winning ballclub. He’s already said a megadeal for someone like Prince Fielder doesn’t make sense given how far the Orioles are from competing in the loaded AL East. That would be consistent with Duquette’s choosy track record with free agents in Boston, where he anted up for Ramirez and Damon, but passed on re-signing players, including Mo Vaughn, Jose Canseco, and Mike Greenwell, as well as Clemens. He says he’ll be aggressive on the major league free agent market in time, while focusing on the draft, international signings and minor league free agent opportunities early on.

The man who apprenticed under keen Baltimore minds such as Harry Dalton, George Bamberger, and Walter Youse said what anyone in his position would say: He hopes to bring the Oriole Way back to Baltimore, with pitching, defense and fundamentals spurring a comeback.

“This is the kind of opportunity that I was looking for,” Duquette beamed. “A club that needed rebuilding, a great fan base, a lovely facility. All of those assets were attractive to me.”

Saddled with what might be the toughest managerial job in North American pro sports, he’ll need every bit of that optimism to make it work.

Team Continuity Strikes Again with the Minnesota Twins
Cleveland Indians, Worms’ No. 1 Enemy
Polarizing Trade For Two Deep Sleepers
Five Tips To Get The Cubs On Track
Canadian Sports Anchor’s Kent Brockman Moment
Farewell, Frank: Dodger Faithful Have Reason to Rejoice
Are the Cardinals the Most Unlikely Champions of All Time?