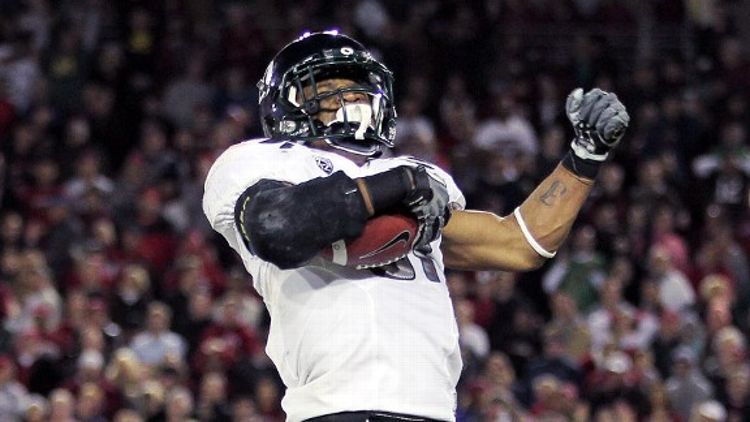 If the incessant roar of “Suck for Luck” is any indication, Stanford quarterback Andrew Luck has an exceedingly bright future ahead of him. But his present — one that he surely hoped would include a Heisman Trophy and a shot at a national championship — was shredded Saturday by the multi-edged buzz saw that is the Oregon Ducks.

The Ducks beat the Cardinal 53-30, in part thanks to the combustible LaMichael James, who gashed Stanford for 146 yards and three touchdowns on only 20 carries. (This, after Oregon beat Stanford 52-31 last season.)

That Oregon coach Chip Kelly has a plethora of spread and read concepts in his offense is by now well-known. And Saturday evening against Stanford was no different. Kelly has often remarked that it sometimes takes him a couple of series to tease out how the opponent wants to defend him. At that point, his up-tempo offense usually explodes.

Against Stanford, Kelly repeatedly went to his basic zone-read run game but with three receivers to one side and a tight end to that same side — an unbalanced set. Because Kelly forces the defense to cover his three receivers with three defenders, or else his quarterback is instructed to throw a bubble screen to one receiver while the other two block, he forces the defense to make decisions in how it will defend the inside runs. 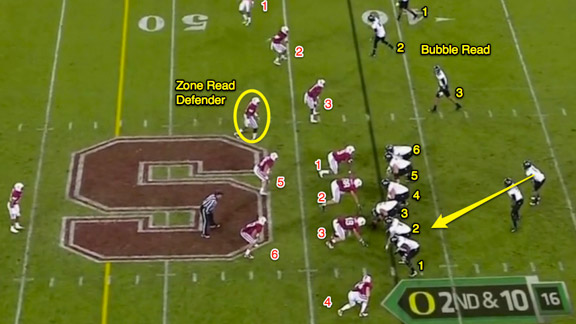 Against this look, Stanford keeps its defense shifted to the tight end side. This means two things: First, with the quarterback involved in the running game by reading a backside defender, the offense has six blocks to account for the defense’s six frontal defenders; and second, the bigger gaps and space are to the “open” side, the side away from the tight end. 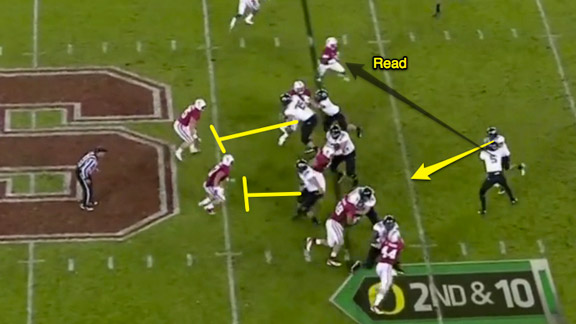 As the play begins, a few things become clear. Most significantly, Ducks quarterback Darron Thomas reads the backside linebacker who, while he tries to enter the backfield, has no hope of being a threat against James on an inside zone play being run to the offense’s left. The next element is that Oregon’s line does a good job of attacking and getting contact. Note that they don’t overpower any of the defenders, and Stanford even does a good job of slanting in the direction of the run. But they get contact, and the rest of the work is left to James. 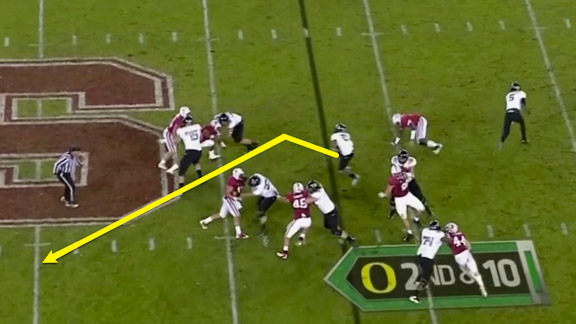 In the above image, you can see that though the run was an inside zone to the left, James has cut it back through a crease to the right and now is patiently headed back to the left, toward the open void. 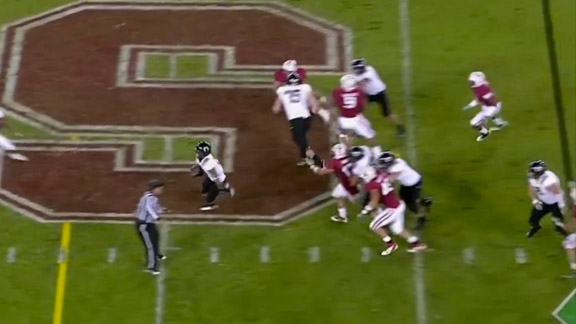 At this point, James has one task: beat the free safety. This is something he does easily en route to a 58-yard touchdown run. This same set — the unbalanced trips set with a zone read look — was so successful Kelly went to it several more times in the evening for several first-down conversions and even a (much shorter) touchdown later. It exemplifies all the things that make Oregon’s spread offense great: a balance of numbers through the offense’s uses of constraint plays like bubble screens, zone blocks the line can make because they have flexibility to take defenders where they want to go, reads by the quarterback to effectively “block” defenders, and, of course, speedy, speedy backs with great vision bursting to the end zone.

Previously in this series:
LSU and the Speed Option
The Kansas City Chiefs and the Counter Trey
Tim Tebow and the Two-Point Conversion
The 49ers and the ‘Wham’ Play
Green Bay and the ‘Dig’ Pattern
Blount’s Game-Winning Touchdown
Bills Breakdown
Cam Newton’s Debut
Darren McFadden’s Touchdown