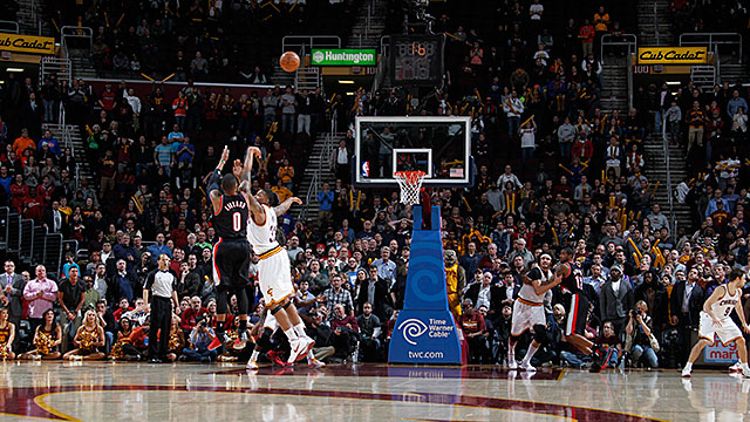 I went into the Cleveland-Portland game thinking nothing could be more entertaining than the pregame rumors that Dion Waiters wanted to be traded to the Sixers because, and I quote Bleacher Report quoting an unnamed source here, “he thinks he’d be the best player on the team. That’s his mind-set.” My mind-set is that Waiters needs to dream bigger, but whatever. All that got washed away when Damian Lillard and Kyrie Irving squared off and we got a peek at a point guard battle we’ll probably be savoring for a decade. And if that weren’t enough, Lillard capped the night with an absolutely venomous deep-3 dagger. Big Game Dame’s legend grows, and this Rip City life is driving me insane, in the best possible way.

For a while, Waiters’s play was actually the story of the game, with his 11 fourth-quarter points. Two of those came off a nifty up-and-under, past Mo Williams, which Waiters followed up with cursing out/trash-talking/sending season’s greetings to the Portland bench. Famous last words. A couple of minutes later, the Portland TV feed cut to a shot of a totally untroubled-looking trio of LaMarcus Aldridge, Nic Batum, and Wes Matthews. Over the course of this season, Portland’s big four — these three and Lillard — has started to have the same Jaws-theme swagger that the league’s best starting combos have when they’re about to come back in to end a game. It’s like when Russ and KD, or Blake and CP3, or Duncan and Parker get off the bench; it just puts the kibosh on whatever bullshit run the opposing team is putting together.

The game went back and forth for a bit in the fourth quarter, and then, with about five minutes remaining, Lillard messed around and hit a 30-footer. He was unconscious from distance, hitting eight 3s. When you hit eight 3s, you’re hot. When you are hitting from 30 feet out and ripping the nets, you can hear Jimi.

It seemed like Portland was going to walk out the door upping its road record to a ridiculous 12-2. But with a minute and a half left, Irving made back-to-back 3s (there were 50 attempted 3s in the game; shout-out to Zach Lowe) and things got interesting.

Then Irving went coast-to-coast, getting an and-1. That made nine points in less than a minute for Irving. Tristan Thompson hit the lottery and managed to successfully defend an Aldridge post-up, and the Cavs called a timeout. Mike Brown drew up some Guernica play call, Irving got a mismatch on Batum, and this was the result:

Sorry for going play-by-play like there isn’t an Internet or a League Pass or whatever, but this game, especially the last two minutes, was awesome. The Cavs locked it up at 116, and it looked like we were headed for another overtime classic at the Q between these two teams (remember the Batum game-winner that wasn’t?!).

Nope. Lillard pulled up on Alonzo Gee from 30 feet out and drained it. It was Lillard’s eighth 3, his 36th point, on a night when he also handed out 10 assists and grabbed eight boards. Oh, yeah, it was also his second game-winner in a row, lest you forget what he did to the Pistons in overtime a few nights back:

In the end, Waiters said it best: “That was cold-blooded.”

That’s just his mind-set, Dion. He can hear Jimi.