Craig Kimbrel and the Bullpen Paradox 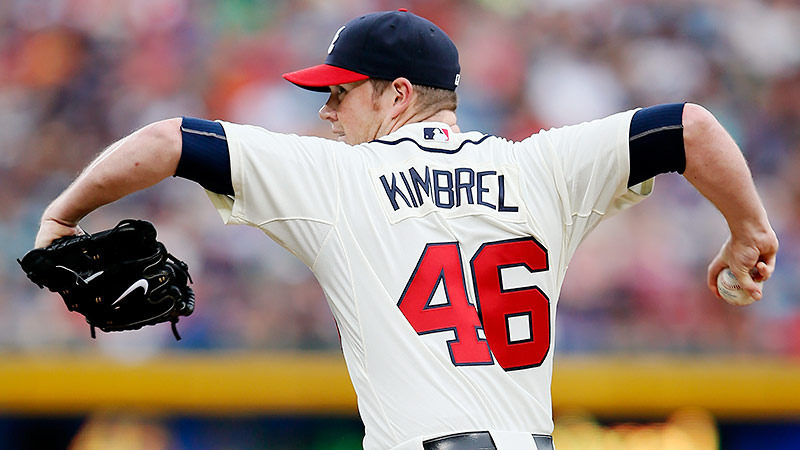 The Braves agreed to a four-year, $42 million contract with 25-year-old closer Craig Kimbrel on Sunday, marking the fourth multiyear deal for an Atlanta homegrown player this offseason, and the latest flash point in baseball’s ongoing debate over relief pitcher value.

Kimbrel had been asking for $9 million in his first arbitration case, quite a bit more than the $6.55 million the Braves were offering. With this four-year extension the team has bought out all the arbitration years Kimbrel would have had, plus what would have been his first season of free agency. The deal also includes $3.5 million in performance bonuses and a $13 million club option for 2018.

The Braves have also signed Freddie Freeman, Jason Heyward, and Julio Teheran to multiyear extensions in recent weeks. After Atlanta inked Freeman to an eight-year, $135 million deal, I talked about the team’s financial situation, namely its need to lock up its best young players to team-friendly contracts. Given the amount of money and years, Freeman’s deal certainly presents some risks, but that the first baseman is only 24 bodes well for his ability to retain his value for most or all of those eight seasons. Heyward inked a smallish two-year deal to buy out his final two arbitration years, so that was pretty cut-and-dried. Teheran’s six-year, $32.4 million pact is such a small monetary commitment that it’s hard to see the downside.

That leaves Kimbrel’s deal, which looks like a potential bargain for the Braves. Assuming Kimbrel would have won his arbitration case, Atlanta is essentially paying him $33 million for the remaining three years. That could net the team a discount of $10 million or more by deal’s end, considering the normal raises top players get during arbitration, not to mention in the first year of free agency.

And Kimbrel is certainly an elite reliever. He’s thrown only 227⅓ innings in his three-plus big league seasons, but he’s notched 139 saves. While his numbers will almost certainly fade as he ages and loses life on his fastball like every pitcher eventually does … it’s hard to overlook Kimbrel owning the highest strikeout rate ever for a pitcher with that many innings pitched. Plus, Kimbrel will be just 29 when this contract ends; his regression, while inevitable, will likely be much further off. He’s got one of the best fastball-curveball combinations in the game, he’s durable, and his manager uses him so conservatively that the only threat of burnout comes from the usual risk factors of throwing a baseball. If a team is going to invest in a closer, it can’t do much better than Kimbrel.

The counterargument is a simple one: No matter who the pitcher is, using him almost entirely in save situations diminishes his value, since he’ll only throw so many innings (Kimbrel has averaged just 65 innings per season the past two years, and less than one inning per appearance) and will often take the ball in relatively low-stress situations, with the team up two or three runs and the bases empty in the ninth. I’ve written at length about the flawed ways teams use closers, with managers stubbornly refusing to break from typical usage patterns, even with the season on the line.

But let’s not go overboard in disparaging the value of a good ninth-inning specialist. Though closers could be used more efficiently, they still pitch in more high-leverage situations than any other pitchers, year after year. According to FanGraphs, relievers with at least 20 more saves than holds in 2013 entered games with an average Leverage Index of 1.70 and a median of 1.68; conversely, for relievers with at least 20 more holds than saves, it was 1.40 and 1.39. You can say the best closers have the best stuff, the particular mentality many within the game believe is real and invaluable, or both. Regardless, there’s no debating that having a pitcher as talented as Kimbrel closing games is an edge any team would love to have.

And that gets to the larger point about relief pitchers: It might feel like putting a stud in the pen is a waste, but relievers are more important now than ever. Numerous factors have prompted starting pitchers to exit games earlier, including smaller strike zones, more powerful lineups, better bat design, an enhanced focus on working the strike zone, an increased commitment to pitcher health, and a greater understanding of pitcher-batter matchups. In 1968, the Year of the Pitcher, the average start lasted 6.65 innings; by 2013, that total had dipped to 5.90. With relievers covering so many innings over the course of a season, and with many of those innings coming in the most high-leverage situations possible, it’s only logical that relief pitchers’ salaries would keep rising along with the price tags at every other position.

Performance remains extremely volatile for relief pitchers; two or three poorly located fastballs or a little bad luck can dramatically influence a season’s worth of stats. But the broader takeaway for how to evaluate relievers remains achingly simple, and the same as teams would apply to players at any other position: Instead of betting on older free agents to buck precedent and dominate well into their thirties, pay the best guys the most money while they’re still in their prime. In other words, give Kimbrel his money and let other less fortunate teams waste millions on the Brandon Leagues and Jonathan Broxtons of the world. Talent and youth are worth the big bucks, even when it comes to closers.

Trade talk at All-Star weekend has been "as slow as it's been in a long time," said one executive who has not received a single phone call. A lot of teams have made it known which players they are open to moving, but the problem is finding trade partners. Very few teams are willing to part with premium draft picks or take on future salary, which are the two key drivers for trades.

“I’m going to measure 6 feet -- I’m 72 inches on the dot,” Manziel said during a break in his preparation for the combine. “If they want to try to jump on my shoulders and squish me down, it’s not going to be any less than that.”