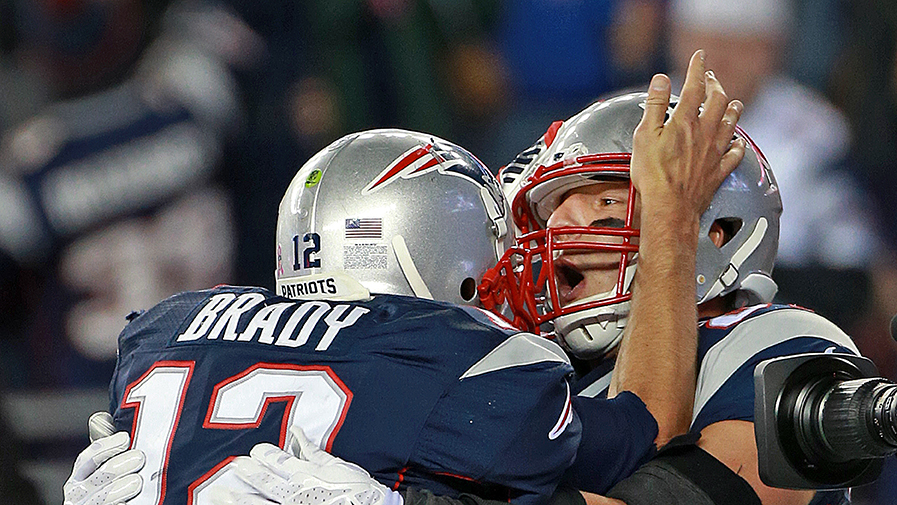 The former Panthers wideout has been targeted at least six times in three of the last four games. He has quickly gained Tom Brady’s confidence. I think, at this point, Tom might even let Brandon touch his perfect hair. The Jets secondary is a mess. With Dee Milliner sidelined for the year, Rex Ryan is forced to play guys named Josh Thomas, Darrin Walls, and Phillip Adams in his place. Brady is salivating more than everyone else does when his old lady poses pantsless in a boot ad. LaFell (97 yards and tw0 TDs last week) will benefit. 2,000 jermajesties

I swear, I’m going to get this right (or maybe get this Wright) one of these weeks. It seems like the Patriots offense is back to their bread and buttered lobster, utilizing dual–tight end scheming. Gronk is Gronk, and when healthy he really should be listed at about even odds for this proposition. The Pats are determined to prove that trading Logan Mankins for Wright and a fourth-round pick was a good deal. That Wright has caught a touchdown the last two weeks is a step in the right direction. 1,000 jermajesties each

Pats/Jets to score over a combined 23 first-half points

These early offensive outbursts are difficult to explain. Maybe, after only a three-day rest, the defenses need an hour to get reaccustomed to playing football? Or maybe the players are distracted by watching Scandal on their Slingboxes on the sideline? Or maybe the gambling gods are throwing us a bone. First half … over … Thursday nights? Let’s not bury this bone. Let’s sprinkle it with gold dust and sell it for millions, or in this case, 16,000 jermajesties.

Manning needs three passing touchdowns to set the record. At this point, that’s like betting against Arnold Schwarzenegger to use a movie catchphrase during a press conference. But hear me out. It’ll be a much bigger deal if he breaks the record next Thursday night, at home, against the division rival Chargers. Also, San Francisco is no slouch defensively. The 49ers are second in the league against the pass, allowing 207.3 yards per game. They’ve allowed nine touchdown passes, but four came against Jay Cutler, who is much better than Peyt … wait … that doesn’t really help my case. I’m getting odds. I still like it. Peyton has two touchdowns and 350 yards. I win. 3,000 jermajesties

5/2 odds that Floyd “Money” Mayweather spends the entire $600,000 he won last week betting on the Broncos, (benefiting from a last-minute Geno Smith pick-six) on a custom-made 14 karat gold Manny Pacquiao doll, created by Jacob the Jeweler

Either that or he’s going to purchase a fleet of Porsche 918 Spyders. He hasn’t decided yet, but I’m sure he’ll do the right thing.

Over/under 6.5 Chevy Silverados I would purchase if I were guaranteed to never, ever have to hear Kid Rock’s commercial again

For God’s sake: over! You know that ad? The one that plays every four seconds on any channel a sports fan would ever be interested in watching? Nothing against Kid Rock. Met him a few times. We’ve talked gambling while he chewed on a cigar. He seems like a great guy. But even he has to want to “born free” himself from this song.

Over/under .75 street cred points received by Joseph Randle from Cowboys players from the early ’90s for getting arrested on a shoplifting charge for trying to steal cologne from Dillard’s

I’m not even sure that’s how you measure street cred points. I am sure, though, that the Michael Irvins and Nate Newtons of the world had a pretty good laugh when hearing about the exploits of the latest Cowboys criminal. To make things right, the Cowboys just signed Paco Rabanne to their practice squad.

1,500/1 odds that the Kansas City Royals win the World Series

Yes, I realize the Royals are on fire, having won eight consecutive playoff games this year. Yes, I realize that 1,500/1 odds are outrageous, seeing as Kansas City is only four wins away from popping champagne. But you must realize that Sports Guy Simmons and I bet them at 18/1 odds before their wild-card game and we have terrible — I repeat, terrible — luck cashing in on long shots. Oh, and in typical fashion, we have no plans to hedge. Ned, you and your boys had a nice run. Sorry, Royals fans. Degenerate gamblers … you know what to do.

@TheCousinSal hey what's up loser… How much money did you lose by picking SD to lose?? Freaking loser… You only give terrible advice…

Oh, Brian — you need to pay better attention. I had the Raiders +7.5. That the Chargers squeaked out a win in the final minutes means nothing to me. From now on you are to refer to me as “Freaking Winner” — if not, our friendship is kaput.

@TheCousinSal keep yapping. It's going to feel even better next week when Eli bounces the game winning TD pass off McClains helmet

Oh, believe me, Mike, as a fan who’s seen everything, I’m terrified of a pissed-off Giants team coming to Dallas to play my beloved Cowboys after a hangover win. But I see it a little differently. I have Eli Manning bouncing it off Victor Cruz’s crutches, into the low-hanging Jumbotron, off Jerry Jones’s brand-new lips, and into Odell Beckham Jr.’s hands for the game-winning touchdown. 7/2 odds.

Over/under 719.5 consecutive hours I could listen to T.I. read texts from moms, as seen on Jimmy Kimmel Live, before losing interest

Let’s all pour one out for Jan’s grandpa.

That’s that. Enjoy Week 7 and make sure to check me out tonight on SportsCenter (10 p.m. on the West Coast; Friday at 10 a.m. on the East Coast), where I’ll attempt to cash in on my fifth (yes, fifth) consecutive best bet. I’m warning you: Only watch if you like all forms of currency and exotic jewels. Otherwise stay far away.
—Cousin Sal

The Trade: Was Belichick to New England the Best Deal in League History?