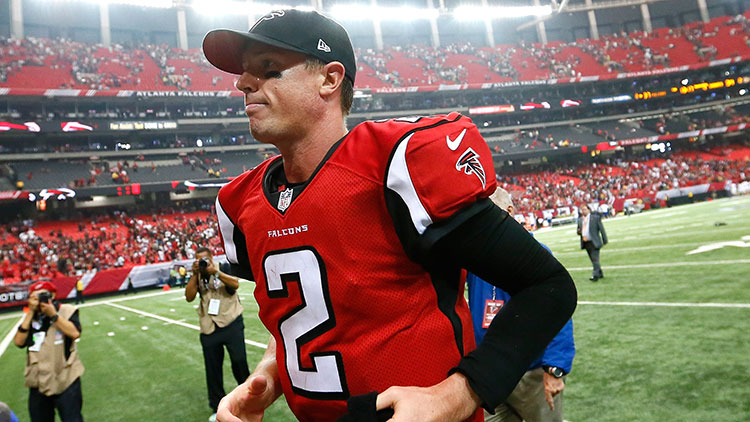 I’m going to pretend people are still reading this weekly devastation. So far I’m down 27,500 jermajesties overall betting on this most peculiar of NFL seasons. That is not good. I’ve done some research and found that some people don’t even make 27,500 jermajesties in a week.

Last Thursday was a rough one. I could actually hear cheers of “Fire Cousin Sal” from my living room. Many feel that I’m too incompetent to pick NFL games. Some are calling for my resignation, claiming that I actually saw tape of last Thursday’s game, chose to ignore the result, and still went ahead with my dismal selections.

Moving forward — because we, as degenerates, must — I actually feel I have a handle on this particular Thursday-night game … which is absolutely terrifying:

So far the favorites have covered the first two Thursday-night games. I see that changing this week. The Bucs failed to beat Derek Anderson and Austin Davis at home. Now they’re playing on the road against a blue chip QB in Matt Ryan. (Maybe Matty Ice isn’t a blue-chipper, but he’s at least someone who would’ve been taken in a 93-round fantasy snake draft). Anyway, in this ridiculously fickle league, that probably means we’re in for a close game. The Bucs are 5-2 against the spread over their last seven encounters with the Falcons. Close game. Bucs cover. Falcons win. 2,500 jermajesties each

John Kuhn and Owen Daniels were the first to strike pay dirt in the previous two Thursday-night games. I’m very close to concluding that this “first player to score” wager is one the bad guys in Vegas just don’t let us degenerates win, but I’m a glutton for punishment (as well as Malomars), so I’m giving it another whirl. Tampa head coach Lovie Smith said yesterday, “We want to play more than one running back, two, maybe three. That’s why we’ve had three (active) every time we could. That’s just making our running back position stronger.” Good enough for me, Lovie. Whether Doug Martin starts or not, 18/1 for Rainey is too good to pass up. Oh, and Julio Jones is the most electrifying player on the field, so let’s drop some jermajesties on him too. 2,000 jermajesties each

I had high hopes for Jacquizz last year, but it seems as if he’s become an afterthought in the Atlanta offense. Even with a declining Steven Jackson, the Falcons have relied on FSU alums Antone Smith and Devonta Freeman to fill that backup role more than Jacquizz. Rodgers has totaled over 40.5 rushing and passing yards just twice over the last eight games. I like even odds to stay under the total. 3,000 jermajesties

Bonus Sunday Proposition: (courtesy of bovada.com): Jaguars will surrender under 3 sacks vs. the Colts (-115)

This is by no means an endorsement of the Jaguars or their offensive line or Chad Henne’s ability to scramble. This pick is based purely on my observation of the Colts’ inept pass rush. Last Monday, Nick Foles could’ve played a game of Candy Crush on his iPhone while waiting in the pocket and the Colts never would’ve gotten to him. The Indy defense has totaled one sack in two games. The Robert Mathis suspension followed by his season-ending injury is a killer. 5,000 jermajesties 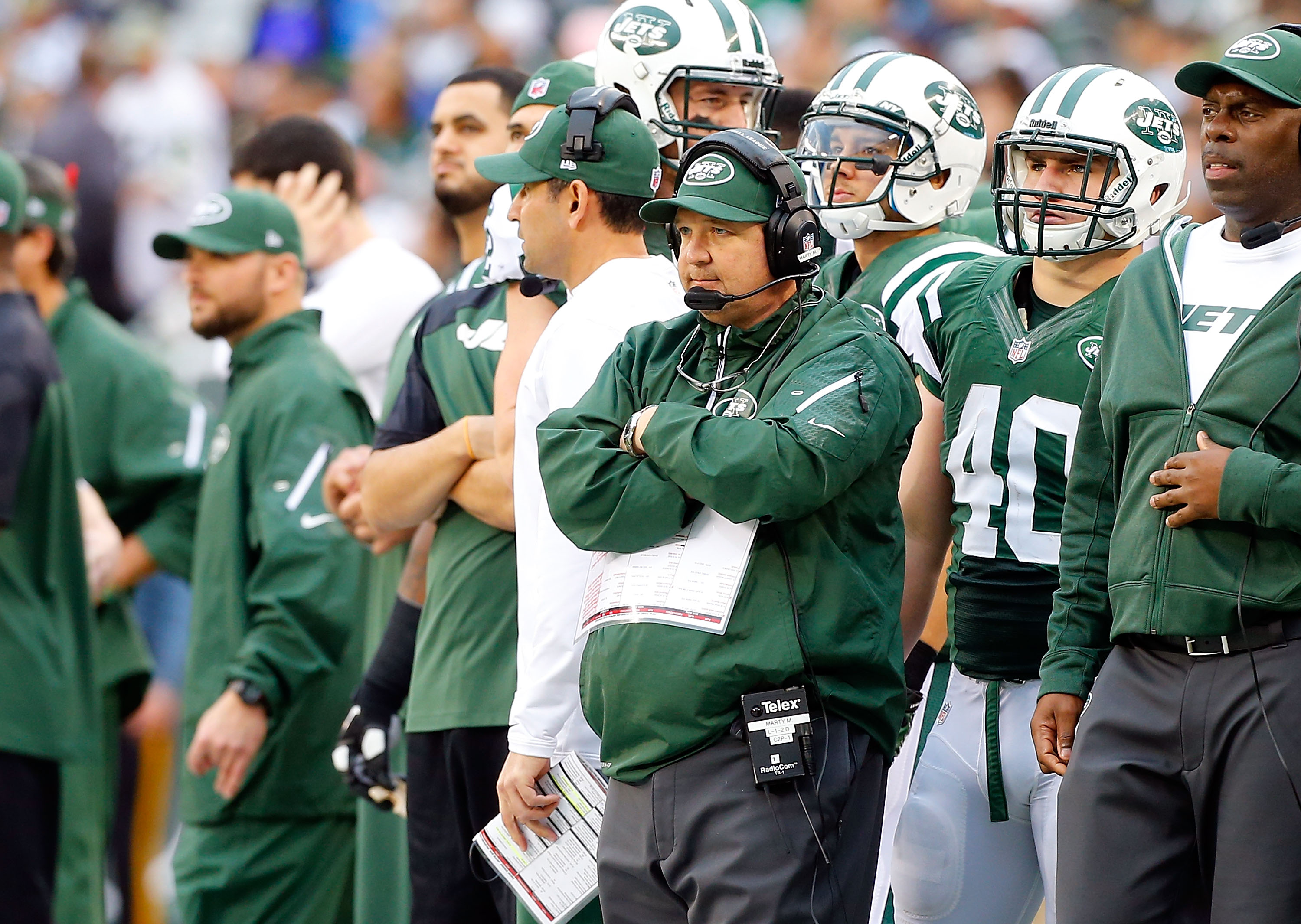 5/2 odds that sometime before tonight’s game kicks off, Falcons quarterback Matt Ryan is indicted for playing the knockout game with an elderly man

I’m guessing it’ll happen right in front of an ATM and Roger Goodell will not even consider looking at existing footage. Seriously, would anyone be surprised by anything at this point?

9/2 odds that Jets offensive coordinator Marty Mornhinweg will be fitted for a muzzle before the Monday-night game vs. the Bears

For those of you who live under Fireman Ed’s helmet, the Jets were charged with a timeout a split second before Geno Smith connected with Jeremy Kerley on a game-tying touchdown pass last week in Green Bay. It was later determined that Mornhinweg called the timeout even though the head coach is the only one on the sidelines who has authority to do so. Unfortunately for the Jets, the official had his back to the Jets sideline and assumed it was Rex Ryan calling for the TO. Such a stupid thing, and yet one word could help prevent this from ever happening again … HELIUM. Each head coach carries a helium balloon. When he’s ready to call a timeout, he breathes in the helium and yells the word “timeout.” It’s a surefire way to differentiate his voice from the 40 others on the sideline. Not to mention, how much funnier would Inside the NFL’s miked-up segments be?

Over/under 13.5 Darren Sproles voodoo dolls purchased by a man who lost his only game on a 15-team parlay thanks to the Colts’ Monday-night collapse, costing him $100,000

The Delaware Sports Lottery allows desperate gamblers like you and me to make $5-15 team parlays. One poor unnamed bastard had 14 winners heading into Monday night. He was looking solid with the Colts (-3) before Darren Sproles (148 of 152 yards after the catch) did his best Bo Jackson Tecmo Bowl impression for the comeback victory. Stories like these make me both feel sick to my stomach and want to buy an autumn time-share in Delaware.

“Who?” you say. “Exactly,” I say. The former Florida Gator linebacker is the fifth-round draft pick the Saints picked up from the Eagles in exchange for Sproles. He currently has 0 sacks, 0 tackles, and 0 interceptions for New Orleans, which, to be fair to him, is on par with the rest of the Saints defense.

@TheCousinSal get a different job, you're horrible at everything you do. Bills 29 Dolphins 10 #youareajoke

But Luis, if I’m horrible at everything I do, why would I even attempt to get a different job? Burnt!!

Hey @TheCousinSal anyone ever tell you that you look like a little penis with a hat on? #hack

Nope. I get kerchief A LOT, but never hat. #hack

Don’t worry — I eventually let the guy go for a packet of oregano. That’s that. Enjoy Week 3. You can catch my best bets on SportsCenter beginning at 10 a.m. Friday mornings, re-running throughout the weekend. One more losing week and I’m going to allow Neil Everett to repeatedly kick me in the groin.

The Sound and the Fury: Are Florida and Will Muschamp Shouting Into the Void?