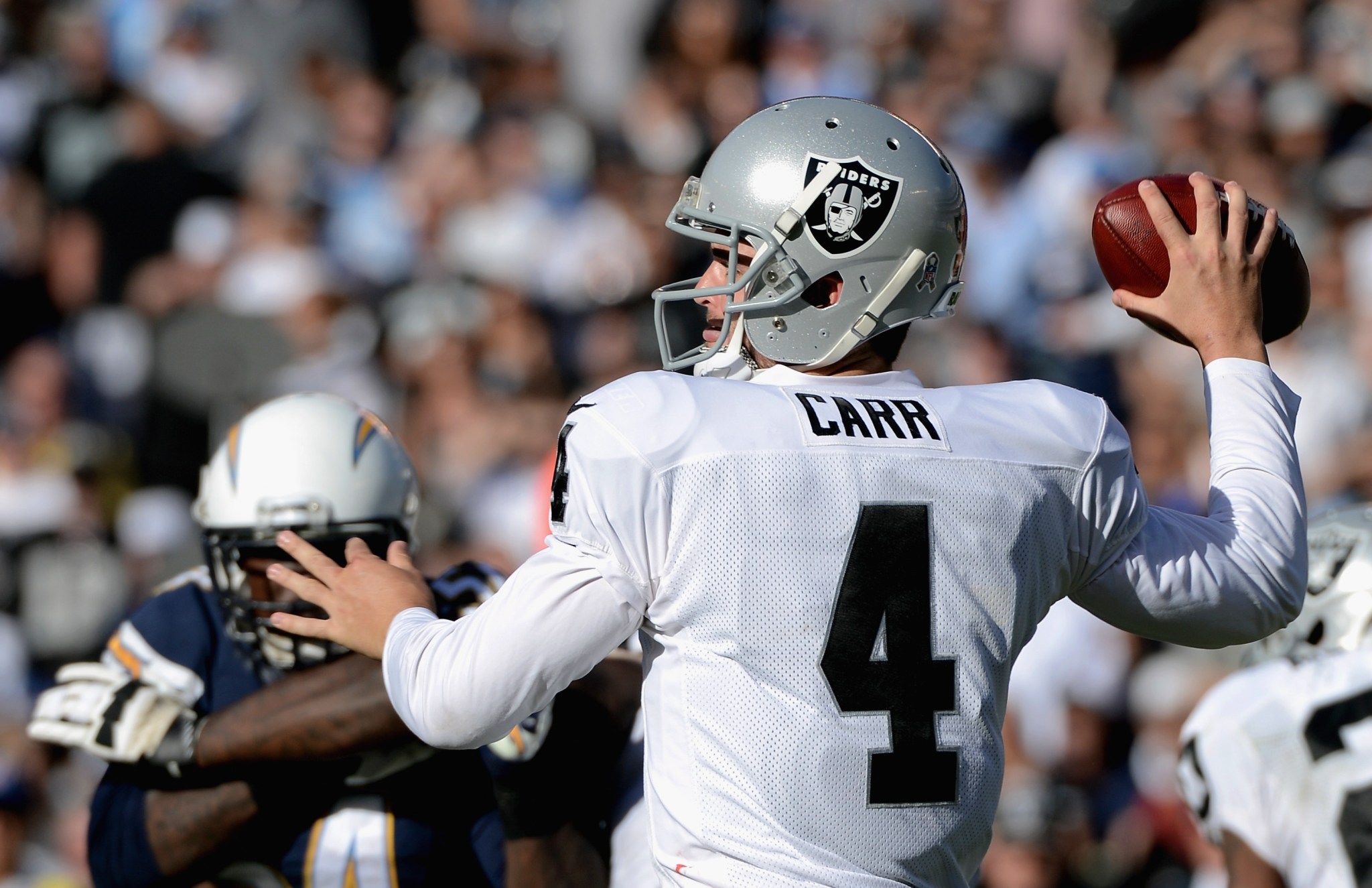 When you are in the hole jermajestywise as much as I am (do NOT scroll down to see the year-to-date totals. I’m telling you, just don’t do it!), you have to take chances. Actually, you don’t have to take chances, but not taking them has gotten me nowhere, so I’m placing my chips on the double zeroes. By the way — the Double Zeroes could be a great new nickname for the Raiders when they make their inevitable move to L.A.

There’s actually solid logic behind thinking that Oakland has a shot here. Stay with this shoddy analogy if you can. You know that one buddy you have. He’s the life of the party. You head out with him to Vegas and by 7 p.m. he’s cleaned up at the blackjack table while making everyone, including both dealers and all three pit bosses, laugh for three hours. He’s miraculously had his room comped and upgraded to a penthouse suite just by charming the concierge and, even more miraculously, later in the evening has convinced two strippers to sit on his lap all night without charging him a dime.

Then the next day at the brunch buffet, he’s bleary-eyed and so hungover that he’s unable to speak. He’s left the table to make multiple trips to vomit into the plant by the keno machines. You know that guy? Well, I don’t have a friend like this either, but if I did, I’d call him the Kansas City Chiefs. Huge win last week vs. the defending Super Bowl champs and now, on only three days’ rest, they have to travel to Oakland and face a team that is determined (?) to notch its first victory. Oh — add this to the equation: The Chiefs are looking past the lowly Raiders toward their Sunday-night affair next week vs. the Broncos. They don’t have to be the life of the party at the lunch buffet — they’re coming back next week. I don’t know if any of that makes sense — but casinos should be on high alert, because Andy Reid is about to throw up everything he ate last Sunday into a potted plant. 25,000 jermajesties on the +7.5, 10,000 jermajesties on the +270

Make all the Derek Carr jokes you want (go ahead … I’ll wait … I enjoy them all), but statistically he hasn’t done a terrible job. In fact, Carr has gone over our desired 190.5 mark three times in the last four games. Whether you think the Raiders will need to play from behind or just flat-out compete, the over is a decent value bet.

Sorry, I’m still reeling from my fun Vegas-buddy analogy. We may proceed. 1,000 jermajesties each

Jonas Gray under 62.5 rushing yards vs. the Lions this week

God bless you and your crappy fantasy team for going 3-8, earning you the right to steal Jonas Gray from others who are actually in the playoff hunt — but don’t be surprised if he’s a one-hit wonder. You may think that I’m high on peyote for making this bet after witnessing Gray’s 201-yard, four-touchdown performance. But before you tattle on me to the R.A., keep this in mind: Bill Belichick is still the Patriots head coach. He mixes things up to a point where even his own coaching staff is confused. He’s like your annoying skinny cousin who never wears the same dress twice. The game plan for Detroit will be vastly different from the one against Indianapolis. Oh, and now there’s this tidbit, which I swear has just emerged as I completed this paragraph.

RT @JosinaAnderson: Source: RB LeGarrette Blount is currently at the #Patriots facility. He is expected to sign with the team.

Speaking of peyote: You remember Blount. He’s the guy who had the monster playoff game for the Pats last year and was rarely utilized again? Good old Bill. Under! Get it in, quick! 7,000 jermajesties

18/1 odds that Texans defensive end J.J. Watt records a sack, recovers a fumble, catches a touchdown pass, throws a touchdown pass, kicks a 65-yard field goal, and castrates an actual Bengal tiger in his game vs. Cincinnati this week.

I would not bet against any of that. And don’t blink, because it could all possibly happen on the same play. This guy is a true beast.

Over/under 37.5 F-bombs I let fly last Sunday night after the refs allowed the Colts to take the ball at the 20-yard line after the kick returner bobbled it at the 1 and downed it in the end zone

The F-bombs came into play because I had bet over 56.5 points in the game. A wager that’s come in just about every Sunday night since the pros started playing football this season. Early on, I was welcoming any scoring I could get. Even the measly two points afforded by a safety. So when the kick returner tried to field the ball, fumbled and bumbled it backward into the end zone and then got tackled — I thought for sure I’d receive a free deuce. Not the case. Apparently you have to establish ball control. The Colts player didn’t — so the play is ruled a touchback. So to be clear — in the NFL, if you’re about to field the ball at the 1 and then see trouble coming, you can bat it back or even kick it out of the end zone without fear of being called for a safety or even penalized. Illegal-contact fouls be damned. I can honestly say that now that the tuck rule is no longer around (I can’t remember — it is gone, right?), this is the worst regulation on the books. Fix it please.

Shame on me for taking a cheap shot at Scott Norwood. That guy has been through enough. Just the same, I pray for his sake that he isn’t anywhere near Bills fans holding shovels.

I am by no means calling these lovely and exquisite ladies gold-diggers. I’m simply insinuating that this man will go to whatever lengths necessary to meet Rob Kardashian. He’s THAT cool a guy!

@TheCousinSal the over!!!!! Going to name next born Cousin Sal… Or at least next dog… Cheers!

@TheCousinSal Getting giddy about betting against a 6-10 Mike Smith coached team in the playoffs?

I am about as giddy as a guy who almost definitely won’t have any jermajesties to wager on wild-card weekend can possibly be. Has a head coach ever been fired in the week leading up to a playoff game? I need to look that one up.

@TheCousinSal Do I have permission to tease KC, NE, and GB?

I’m taking the Raiders. Aren’t you paying attention, Jared?!?! One in the books for you. Best wishes on the other two games.

3/5 odds that my Hide-and-Speak comedy bit that aired this week as part of Jimmy Kimmel Live’s National Unfriend Day (N.U.D.) campaign causes a relationship-ending Thanksgiving Day argument between the baby elephant and his mother elephant.

Either that or they ended up bathing together. Coin flip.

That’s that. Enjoy Week 12 and be sure to watch me on SportsCenter airing at 10 tonight on the West Coast (and all morning Friday on the East Coast). I’ve won an alarming 70 percent of my best bets this year. Yep … me … same guy.

The Future Is Now: Q&A With Seth Rollins

The Chaos of the 2015 RB Free-Agent Class